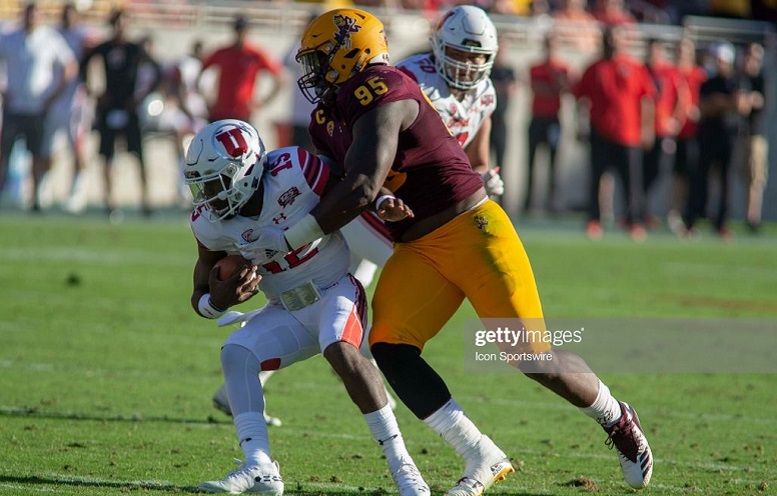 When a player is viewed as a nose guard he becomes someone that has to be looked at if you run a 3 man front. Renell Wren (#95) was that guy for Arizona State. He’s a bit tall for a true 0 tech lineman and more closely fits the usual size requirements the Steelers look for in their defensive ends.

From the initial game watched the first thing you see is a good first step at the snap often being the first DL to fire off.  He gets his hands up quickly and has the length and the strength to keep offensive lineman off of him. When he stays square he can keep an eye on the ball and shows solid lateral agility to slide down the LOS to protect his gap.

Vs Arizona, he almost jumps off side and is able to reload and still fire off fairly quickly. His hands are late but strong enough to get the LG off of him and make the tackle.

Vs Arizona, here is a good look at his quickness at the snap. He was much faster than the rest of the defenders. He plays with leverage, good hand placement and reaches out to wrap up the RB. Sadly, there weren’t a lot of these plays.

Vs Utah, the OC blocks down letting him through unblocked and he tucks in behind the pulling H-back to get his hands on the running back.

Unfortunately, there aren’t a lot of other good things to like here.  He often stops his feet and doesn’t show a consistent ability to move lineman. His hands aren’t active at all. You don’t see the fight to use chops, slaps or clubs to disrupt the OL’s balance and ability to control him. And while he seems to be plenty strong enough, you don’t see him shedding the blocker.  His COD is marginal so even when he gets in the backfield, backs don’t have a hard time avoiding him. Frankly, most of his tackles came to him either running in the A gap or being there when a RB cuts back. He has solid awareness on screens but rarely makes plays outside of the hashes.

Vs Arizona, this is what I saw too much of on tape. It’s a stalemate which isn’t necessarily bad but, the feet don’t move much, no hand usage to get off the block and running back runs through a huge hole right next to him.

At Arizona, he shows good recognition here diagnosing the screen. The design of the play brings the WR back inside right into his lap for the tackle.

In the passing game he offered very little.  He was often taken out on passing downs and in the chances that he did get there was no push or pass rush plan.

Vs Utah, this is his lone sack of 2018. It’s a WR screen where the OLB jumps the passing lane. The QB tucks the ball away and Wren gets the sack.

I was looking forward to reviewing the last couple game because he had 42% of his total tackles and 37% of his solo tackles in the last three games. Watching him I kept waiting for something to click and it never came. There was no nasty to his game.

With the Steelers needing depth along the defensive line, I was hoping this might be a potential option. My feeling is based on his size and quickness at the snap he’ll get drafted with the hopes that some coaching staff will be able to coax more out of him. Maybe some will be able to do that but I think there will be better options in the draft.