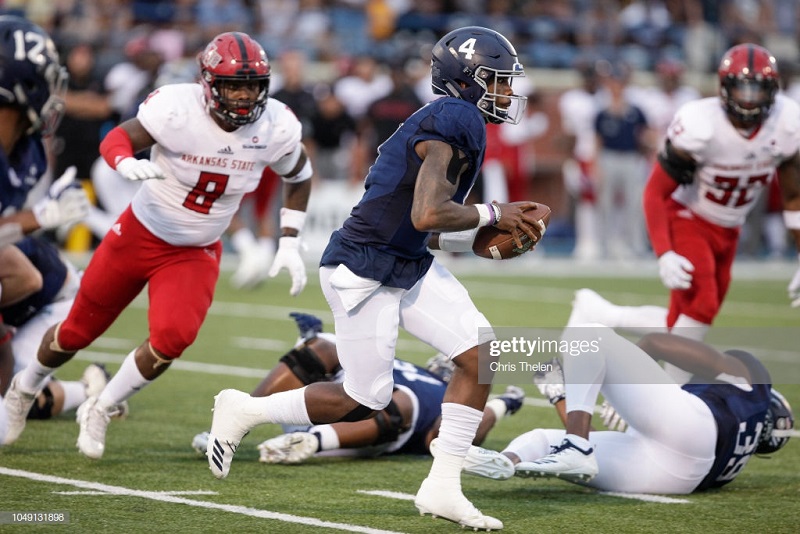 Ronheen Bingham  (#8) was not a name I had heard of until I heard PFF mention him on the radio a couple weeks ago. They seemed to have a good opinion of him and any time a player has pass rush ability you have to take a look. He played DE in Arkansas State’s four man front but will likely have to switch to OLB at the next level.

Right from the start, you get to see good things from Bingham as a pass rusher.  He has a very good first step and has a very good up field burst able to put pressure on the OL immediately. He has the speed and flexibility to bend on the outside and flatten out to the QB. He will also use a spin to the inside and outside and a slap/swim to win vs blockers.  He displays good short area quickness able to maneuver around OL and get into the backfield. His hands are inconsistent leaving him to be swallowed up on by OT on some rushes. His balance is an issue and spends too much time on the ground. Even on reps that he wins he’ll end up moving a blocker and lose his footing and hit the ground. But the nucleus is there: speed, motor, aggressiveness lead to potentially being a productive pass rusher. He wasn’t asked to cover in the games watched but with his athleticism zone drops should be feasible.

At Alabama on the right edge he bulls the TE to move him into the backfield. He displays athleticism to get around the block to the inside and dive for the QB arm to the outside to cause the incompletion

At Alabama on the right edge he uses a spin to the outside on LT Jonah Williams (#73) that leaves Williams turning around and asking “where did he go?”

At Tulsa he’s on the left edge he looks to lift the arms of the RT and dips the shoulder showing good ankle flexion and bend around the corner. He doesn’t get to the QB but you have to like his effort.

At Tulsa on the left edge again he jabs to the inside and uses a slap/swim around the outside and again dives for the QB arm to cause the INT.

Vs Appalachian State he’s on the left edge and starts up the outside and spins inside using his inside arm to clear the tackle to get the QB pressure.

Vs Appalachian State from the right edge he converts from speed up the outside to almost a hump move under the inside arm of the tackle driving the LT back but he loses his balance.

Against the run, he is showing improvement overall.  Setting the edge was an issue where he wouldn’t process the play quickly enough and get caught inside. But the later it got in the season; he became more consistent getting depth and forcing the run inside. On runs away he shows good aggressiveness to chase and is a good tackler when he gets his hands on the runner. He must add play strength to handle the point of attack and improve ability to shed.

Vs Middle Tennessee State he’s on the left edge (#23 as a junior) and the FB is left to block him. He easily hops left and back right to hit the RB in the backfield

At Alabama he doesn’t recognize the pulling OL and gets washed inside by the TE block.

At Georgia Southern on the left edge he doesn’t chase the fake inside and plays under control, square to the LOS to contain and tackle the QB.

Vs Appalachian State he’s on the right edge. I think he reads a run to the inside and is able to win inside vs the LT and shows good effort to work down the line and makes the tackle.

With only two years of experience at an FBS school Bingham is still raw but as you can see from the highlights the athleticism, burst and quickness are already there. If you get him to add some muscle and coach him up he could be at the very least a sub package pass rusher in the near future. Teams will need to identify if he can play in coverage and be more consistent vs the run to determine if he can earn a full time position at OLB. Get him on the roster, use him on special teams and teach him what he needs to know. Some may think they can sneak him on the roster as a UDFA but I think someone will take a shot with a draft pick.

Games Watched:  2017 – Vs Middle Tennessee State; 2018 – At Alabama, At Tulsa, At Georgia Southern, Vs Appalachian State