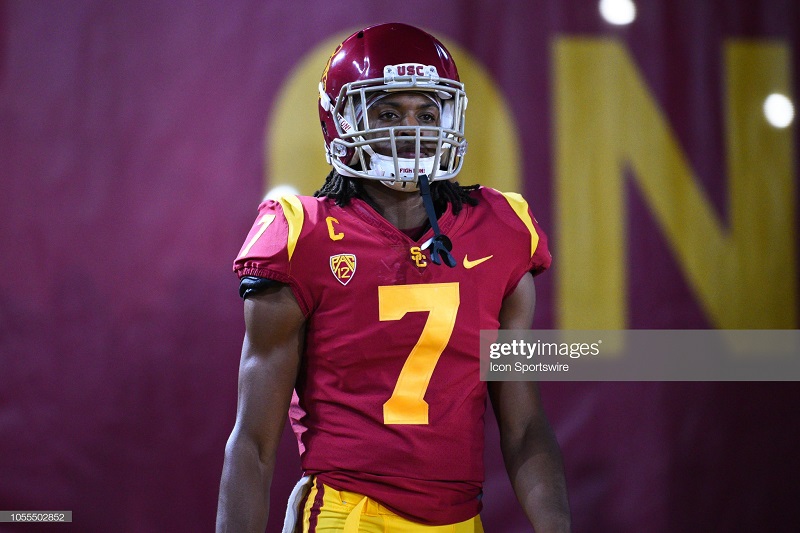 USC’s Marvell Tell III is one of the victims of a loaded safety class but he is not a name to be forgotten. While the safety had a relatively quiet season, recording 56 tackles, five pass defenses and one interception, Tell was able to make a statement at this year’s NFL Combine. Tell’s 42” vertical jump and 11’4” broad jump were second among all safeties and his three cone time was the best among his position group. The USC safety’s athleticism really is not surprise as it flashes throughout his play on the field.

It is easy to notice just how fluid and smooth Tell’s movements are on the field. There is no hitch in his step as he effortlessly uses his athleticism to get where he needs to be. Tell comes downhill quickly as he possesses great burst and acceleration. Watch on the play above as he locks on to the Texas quarterback and is able to wrap him up before the end zone. It is plays like the one above that lead me to believe that there is untapped potential in Tell’s ability to make plays in the backfield despite his unusually low 6.5 career tackles for a loss.

These are the types of plays that make you fall in love with a prospect. To be able to sniff out a tight end who has released from his blocking duties and to also able to possess the athleticism to make an incredible interception is no short feat. Tell shows great awareness and mental processing to diagnose the play above. His short area burst is on display again and the interception is just the icing on the cake. There is no doubt that Tell has all the physical and mental tools to be a playmaker at the next level.

Tell operates really well in cover two, where he is responsible for half the field. While it is hard to tell on the play above, it looks like USC is in cover two with Tell responsible for the left side of the defense. He uses his mental processing skills once again and is able to sniff out the slot receiver’s dig route, meeting him at the point of contact and dislodging the football. Tell is a physical player and despite being just under 200 lbs, he is not afraid of contract. The USC safety consistently lays the boom on his opposition and makes his presence known in the middle of the field.

While Tell excels in cover two, he does not have the same success as a single high safety. Too often he is caught staring into the pocket. On the play above, Tell is staring down the quarterback and is late to pick up the inside route. On other occasions, receivers have been able to run over top of him as he gets caught watching the quarterback’s eyes.

If Tell’s earlier interception was the peak of his film, you can bet that this play is rock bottom. One area Tell will need to improve in is his effort. If he can show the same effort and intensity that he does when punishing running backs in the hole on every single play, Tell’s stock would be much higher. The play above is reminiscent of school yard two hand touch football as Tell decides to pat the Cal quarterback on the butt rather than make a tackle.

Tell is going to find a home in the NFL as his athleticism and playmaking potential leave some optimism in his development. With the athleticism to be a playmaker in the deep end of the field and the physicality to make plays in the trenches, Tell is a sleeper candidate who has a lot of tools to work with. If used and developed correctly, Tell could very likely grow into a starter one day.

Games Watched: vs Texas, vs California, vs UCLA