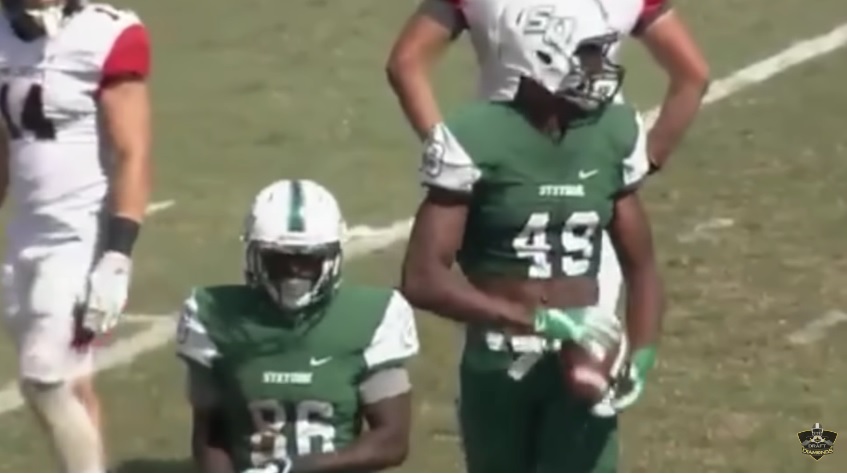 Donald Parham is a tight end that gained steam after he really upped his game as the season went on. He was always dominant at the FCS level, but now, he seemed to just be a virtual impossibility to stop, and he never truly was shut down. Parham’s game is predicated largely off of his height, which is not as bad as of a thing as you would think. He lacks the finesse to his game and the nuances of route running.

There are no head fakes, jump cuts, or any of that shiftiness that guys like Stanley Morgan, Mecole Hardman, or for a tight end, Noah Fant, have, but Parham can create separation because of his size and releases off the line. He knows how to play to his leverage, stack DBs, and more importantly, his short area quickness off the line can give him all the separation he needs. For a big bodied guy who runs a 4.67 and shows off very good long speed,

However, as a former basketball player, where he really wins is in his contested catch skills. They are all over his tape.

First off, this is a really, really nice release. It is good short area quickness to get away from the initial jam and as the DB engages, Parham wins by swats and gaining a step of separation and essentially stacking the DB through his frame and pure physicality. As he goes up and gets it, he catches it away from his body, high points it, and then shields it as he goes down to the ground. When you are becoming a great contested catch receiver, you want to multitask in the air, and Parham does that by high pointing and then shielding as he does it almost at the same time.

As a mover in space, Parham can really move and has some more shiftiness than I thought he’d have. He has showcased a spin move before and has a really nice move and cut here to get to the end zone. I love his ability to win after the catch and do some through a variety of ways, but the real gem is how he grinds out the final few yards and uses his length to get this thing into the end zone. That is a great motor and high effort stuff.

As for the blocking side of things, Parham plays really high. I mean, I guess he can’t be blamed since he is 6’8”, but he doesn’t come in flat backed. He has good strength, though, and that is why he can win this rep easily. His hands, while somewhat outside, have the grip inside. He is a great stalk blocker in space, but in-line, I do have a lot of questions about his ability to block.

Parham’s ability to move in space and showcase long speed is shown here very, very well. Parham has insane movement for his size and just dusts the defense on this one. It bodes well for his prospects in the open field despite lower level of competition.

Donald Parham is a mammoth Tight End that will be a mismatch problem at the next level no matter how you slice it. He can dish out and take physicality due to quickness and his imposing frame and the only thing that will inhibit a true ascension is his route running. His great athleticism for his size and attributes should make him a premium weapon at the next level.

Round Grade: 3rd Round

Games Watched: vs Morehead State, vs Sacred Heart, vs Valparaiso, vs Jacksonville, vs Drake