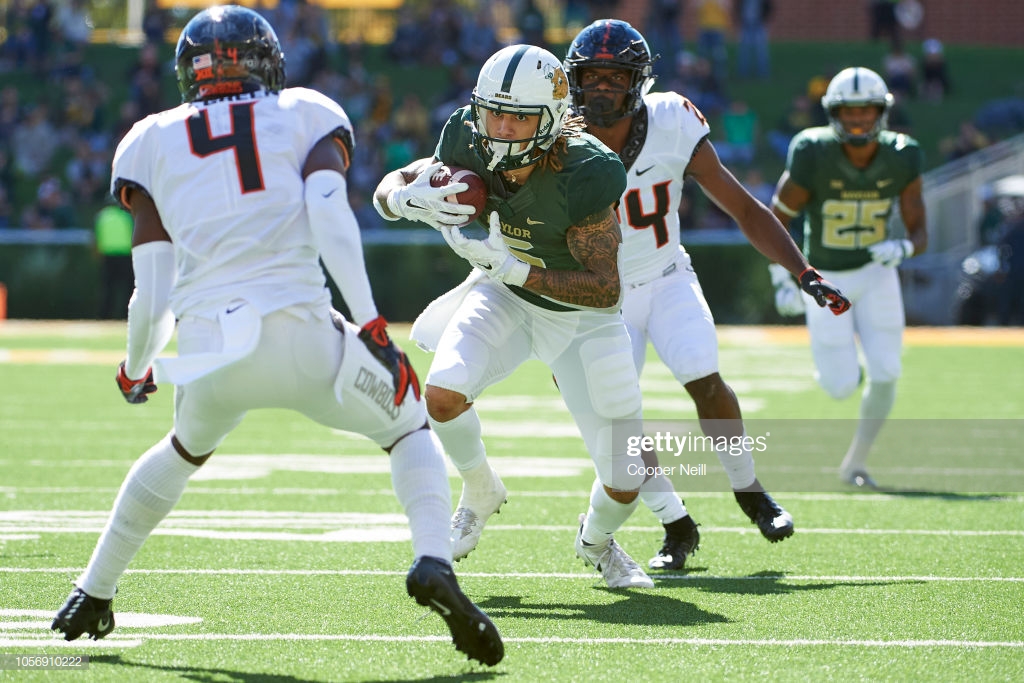 – Soft hands, catches the pigskin away from his body
– Good catch radius, can high point the ball
– Makes defenders miss in space as his RB experience pays off
– Loose hips and nice balance
– Creates separation well naturally, but it can be more developed
– Shows aptitude with contested catches
– Glides away from contact

– Left the Tennessee program mid-season in 2016
– Sat out 2017 season due to transfer to Baylor.
– Underdeveloped route runner with only one year playing WR
– Doesn’t have breakaway speed
– Freshman year underage drinking violation (2014)
– Didn’t face much press coverage, can he get off the line of scrimmage with a defensive back in his face?
– Adequate blocking that may become much better with coaching

– 2018 Big 12 Newcomer of the Year
– According to Hurd’s statement, left Tennessee due to wanting to convert to WR versus the more physical RB position (concussions and the beating on his body) and the Vols coaching staff wouldn’t allow him to convert
– In four college seasons, he rushed 637 times for 2,844 yards and 23 touchdowns, caught 136 passes for 1,438 yards and caught 10 touchdowns
– Five-star recruit by 247Sports and rivals, four-star recruit by scout and ESPN

Split out on the far left slot with an almost 8 yard cushion, #5 explodes off the line and sells the route going inside, then darts outside. This creates separation from the nickel defender as Hurd tracks the ball in the air. The receiver races down the sideline for a big gain. His foot quickness was on display during that play.

Lined up as the near slot receiver on a left three wide formation, Hurd explodes off the line of scrimmage uncovered, tracks the ball, plucks it cleanly, and then gives a defensive back a piggy back ride over the sticks for a first down. Shielding the ball from the defender and catching it cleanly while fighting for the first down were on display there.

To show off his versatility, Hurd lined up as the tailback in the I-formation. He uses a little stutter-step, then sinks his hips while following his blockers as he keeps his feet moving for a 6 yard gain. Unpredictability is the name of his game.

Split out to the left, #5 is given an 8 yard cushion at the snap. He ducks in between the defensive backs’ coverage, tracks the ball in the air, and sits down waiting for the pass to arrive.Once the pigskin is secured, he races towards the end zone protecting the ball from being stripped out as Hurd gets lassoed to the ground for a nice gain.

Lined up in the slot, #5 gets a free release off the line, then sells inside for a step, and suddenly explodes his hips towards the sidelines. #2 tries to interrupt the route, so Hurd races outside throwing the defender off-balance and creates separation. The Baylor receiver secures the catch, and heads for the first down marker. The defensive back wraps him up as #5 fully extends his arm with the pigskin to make sure a first down was gained.

Hurd is a raw project, but is also an explosive athletic playmaker. Imagine what the Steelers wide receiving staff could do with this piece of clay. I’m not sure he will be around when Pittsburgh first picks in the 6th round, but the investment could be worth it.