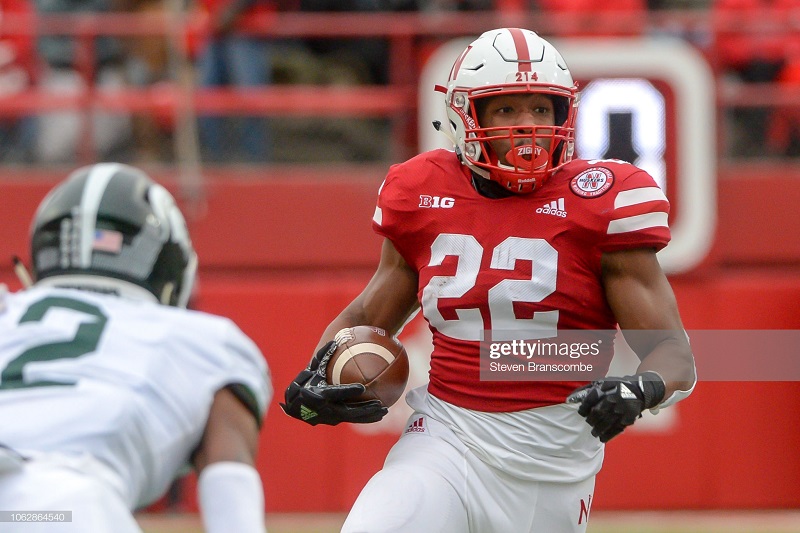 Devine Ozigbo (#22) is another one of those hot names that have been dancing around in the draft discussions. After a solid senior season at Nebraska that earned him an invite to the East West Shrine game he was thrust onto the radar of draft fans.

He has a body built for the rigors of running the ball particularly on the inside. He was used primarily on inside Zone runs and Power runs. He shows solid vision and good patience on inside zone to let the play develop and on power runs he will press gaps and use his blockers well.  He has solid burst to get downhill and runs behind his pads well with good contact balance making him tough to take down and finishes forward for those extra couple yards. He has nimble feet able to make jump cuts and use agility in the short area to make people miss but once he gets up to speed his change of direction becomes more limited rounding off his cuts. In the open field he has solid long speed to make long runs but lacks the extra gear to run away from defenders.

Vs Wisconsin he displays good vision seeing the DE from the left has a clear lane. He bounces right, cuts up field and shows good contact balance to deflect off a defender to finish forward for a 12 yard gain

At Northwestern he shows good short area agility bouncing left before using a little shimmy on the outside to make one miss to dive forward, just sort of the end zone

In the passing game, he was used as a receiver out of the backfield on screens and check down routes in the short area with the occasional wheel to the outside. He was also used on the outside and in the slot on slants and hitch routes. He shows solid hands and ability to adjust for the ball and is able to make the catch away from the body when necessary but will often use his body to make the catch when he can. After the catch he gets his head around quickly to try to gain extra yards but in the games watched he didn’t create above and beyond what was there.

Vs Minnesota he is split wide right and runs a quick hitch. He shows good hands, ability to adjust and concentration with two defenders bearing down on him

In Pass protection he shows very good awareness keeping his head on a swivel scanning from inside to out to look to help where needed before releasing.  He displays good footwork to work back to late blitzers and square them up to give the QB a chance. He needs to improve his hand usage and placement to become more consistent and work on his leverage and balance so he can anchor more effectively so he doesn’t get pushed back.

Vs Ohio State in Pass Pro he works inside to out and displays good awareness to recognize the free rusher coming late up the middle. He adjusts back to give the QB a chance. The awareness is good, the execution can be improved.

Ozigbo is a solid running back, a grinder.  He’s best be used as a between the tackles runner to wear down defenses and execute short yardage situations.  While the clips show good hands as a receiver he wasn’t very effective after the catch and would most likely be a check down option for the QB after releasing from pass protection. I don’t see him as a kick returner but would have value covering kicks. He should have a chance at a number 2/3 RB on a team.