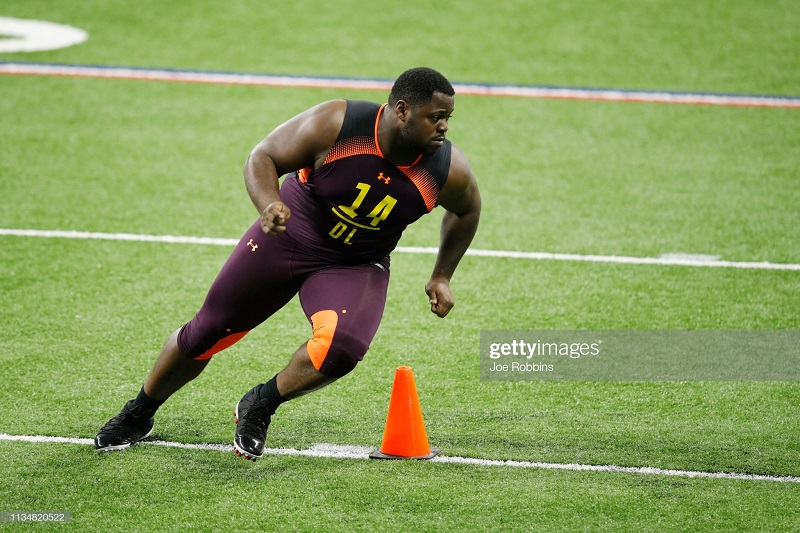 Khalen Saunders (#99) has been a hot name, especially early, in the draft process.  The Western Illinois Roughneck had a very productive senior season that led to a Senior Bowl invite were he got to be coached up by John Gruden and the Oakland Raiders staff.  He was able to showcase his football ability as well as his tumbling prowess. If you haven’t seen the many clips of his talent, here you go.

Saunders has a stout build and played primarily inside from the 0 technique through the 3 technique but he did line up on the edge occasionally in a 2 and 3 point stance to rush the passer.  For his athletic ability he’s actually not very quick at the snap, average at best.  He has the play strength to stack OL 1 on 1 and shed them to make tackles and has the quickness to slap/swim over blockers and get into the backfield.  His anchor is good able to handle double teams but needs to improve his pad level. He has a tendency to pop up rather than fire out forward. His mental processing to identify blocks can be slow but he uses good lateral agility and speed to try to make up for it on outside runs. He shows good pursuit after the ball and will chase to the sideline and down field. A good tackler, he looks to punish ball carriers when he gets the chance.

Vs Youngstown State he’s facing a combo block from the OC and RG. When the center releases he’s able to hold off the RG and race outside to make a tackle.

At North Dakota State again over the center he initially loses the leverage battle getting pushed back a bit but recovers using strength to disengage and get in on the tackle.

As a pass rusher he had good production at the FCS level but again relied mostly on his athletic ability.  A lot of his rushes were contain rushes where he would engage the OL but not really try to apply pressure. From here he could chase QB’s out of the pocket or get his hand up in the passing lanes. When he did rush his process was usually to hesitate initially to try to lull the OL to relax and then use his quickness to get around him.  He had success with the slap/swim move and would try to club or spin on occasion. He will need to develop his hand usage and work on using more than just athleticism.

Vs Youngstown State he’s the 3 tech on the left side of the defensive line. He’s gets a decent punch on the RG and tries a spin to the outside. It’s the chase that’s impressive, good speed to close on the QB.

At North Dakota State he’s in a 2 point stance on the right edge. He uses a hesitation pressing to the outside and a quick jump inside with a slap/swim to get the sack.

At North Dakota State this is supposed to be a screen and then leave him unblocked and he’s just too quick getting to the QB before the play has time to set up.

At the Senior Bowl he’s the 3 tech on the right. He presses right, uses a slap/swim to the left to get in and sack the QB.

Saunders has good athleticism and strength you want in your interior defensive line but he is unrefined.  He needs to be quicker at the snap, play with better leverage and improve his use of hands to take advantage of what he can do athletically.  As a pass rusher he is limited but adding a pass rush plan to go along with the other traits that need improvement he could become effective.  We’ll see over the next year how much he can learn and apply and with NFL training I could see him dropping 10-15 pounds to be even quicker. For his rookie season I see him as a backup/rotational IDL who would probably come off on passing downs until he shows progress in that area.