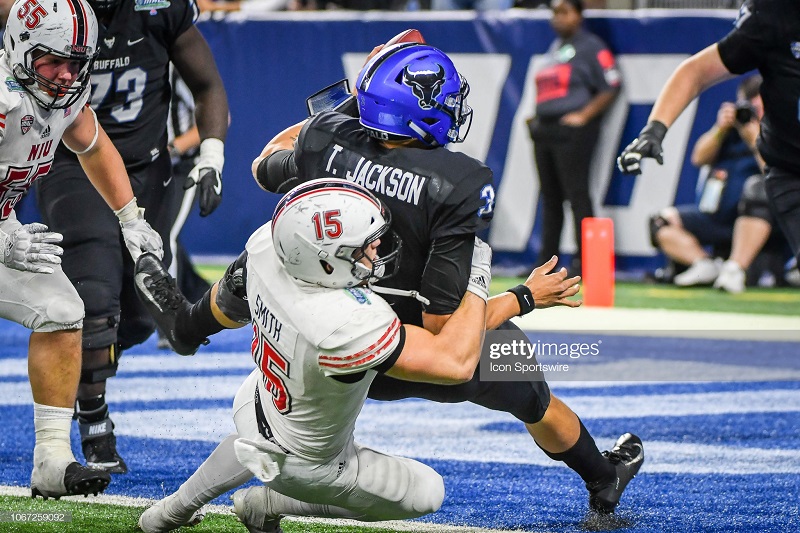 There is no doubt about it, Sutton Smith is a producer. He has a career total of 58.5 tackles for a loss along with 30 career sacks. He has been named the MAC’s defensive player of the year in back to back seasons but yet he still does not seem to have a role as he heads for the NFL draft. Used primarily as a pass rusher at Northern Illinois, Smith is undersized for the role at 6’0 and 233 lbs. He was a late invite to the 2019 Senior Bowl, where he played as an off-ball linebacker which may be a better fit for him at the next level.

As a pass rusher, Smith reminds me of a young Bud Dupree, where most of his sacks were due to hustle and effort. On both plays above, the Northern Illinois linebacker brings down the quarterback well after five seconds. Smith’s hustle and heart would help him transition to off ball linebacker as he never gives up on a play and will continue going until the final whistle.

If there is a redeeming argument to be made about keeping Smith as an outside linebacker, it is his ability to use his hands and dip. Smith is more than capable of using his arms to rip or swim through offensive linemen and his dip move is ready for the next level. The linebacker shows good flexibility as he is able to get low and under opposing tackles to get to the quarterback.

Now here is the problem, Smith can be neutralized rather easily by opposing tackles. Once an offensive tackle gets their hands on the linebacker’s shoulder pads, he is as good as done. Frequently bullied by opposing linemen, Smith’s size and strength leaves him limited appeal to being an edge rusher at the next level.

Being manhandled by bigger offensive tackles is bad enough being neutralized by opposing tight ends and running backs is pretty much unforgiveable. Watch on the play above as Smith is held off by Utah’s running back until the running back releases from the block. That speaks volumes to the lack of functional strength the line-backer possesses. His play against Buffalo was also just as bad, as Smith was frequently overpowered by a tight end in the run game.

Smith is never going to be the kind of player to barrel his way into trenches and make a big stop against the run. Instead he relies on deceptive footwork to open up opposing linemen, giving him the leverage he needs to make his way inside. That is exactly what he does above, as he gets the Buffalo lineman off balance before penetrating inside and make a play in the backfield.

The option play is one that caused problems for Smith all year long, usually because of his athletic limitations. Smith’s change of direction is very rigid as he does not have the natural hips to change direction quickly.

Smith has all the statistics and production needed to make a claim for himself but at the end of the day, his size and lack of strength hinders his ability as a natural pass rusher. Seeing that Smith already struggled against NCAA level linemen, it is extremely unlikely he would fare much better against the grown talent the NFL will throw against him. His role in the NFL likely boils down to two positions. The first being a backup pass rusher where a coach can try to find a way to help Smith overcome his size with his speed and dip move. The second being an off-ball linebacker where his hustle and tackling consistency can make him a great depth piece. Whether as an off-ball linebacker or backup pass rusher, Smith has the makings of also being a special teams ace.

Games Watched: vs Utah, vs Buffalo, vs Toledo