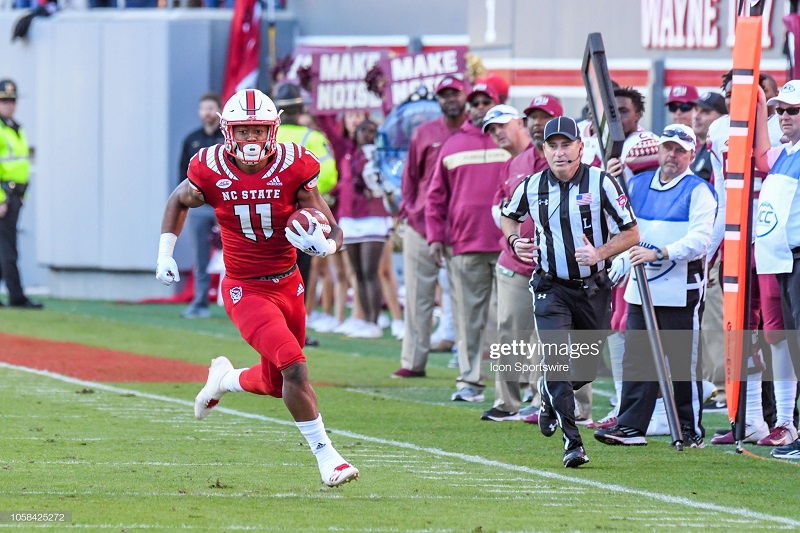 I took a look at N.C. State teammate Kelvin Harmon a while back and now here is a look at his fellow WR Jakobi Meyers (#11). He led the Wolfpack in receptions playing from the slot while garnering All-ACC honors.

He played primarily in the slot lining up on both sides of the field often playing against off coverage not having to face Press coverage much. He shows good acceleration able to eat up space quickly and like to use hesitations and quick fakes before getting into his break. He was used mostly in the short and intermediate areas but did run deep routes as well.

He ran just about all the routes in the tree, mostly in and out stuff, but not the comeback or curl routes. He’ll use quickness and physicality at the stem to create space but will need some improvement here to be more consistent. He showed often that he didn’t need a lot of space showing very good hands, able to adjust all around his frame and with tight coverage. Good concentration to make the contested catch and awareness to get the feet down on the sideline. He’s has solid speed and can get yards when he has space but didn’t create a lot with agility and elusiveness to make people miss. I like his physical toughness as well willing to go over the middle, fight for extra yards or hold on to the ball after getting popped.

Vs North Carolina from the slot he shows a screen route to the outside. He’s off screen on the QB scramble so we don’t see his route but he works back and makes a terrific catch on the sideline.

Vs North Carolina he uses quick acceleration to get on the toes of the DB, a quick fake to the inside to move the DB and makes the catch knowing he’s going to get popped.

Vs Boston College in the left slot he uses a hesitation and break to the outside and goes up over the defender to make a tough catch.

Vs Boston College from the right slot, it’s just a quick out. The defender is all over him and his concentration and hands win this battle.

At Clemson on a screen to the outside. You can see how he has to gather himself before cutting upfield. It was well defended but there isn’t much suddenness in his movements to make anyone miss.

At Clemson not much of a move here just runs by the defender and shows his ability to adjust to the back shoulder throw.

At Clemson he’s wide right and motions into the slot. It’s a quick hitch but I liked the effort  here to get the extra 5 yards.

Vs Florida State more concentration and effort. He’s running a slant to the inside and I’m not sure if this pass is to him but its deflected at the LOS. He makes the catch and shows that effort after the catch.

As a blocker he is willing and will get himself in good position between the defender and the ball a trait of the N.C. State receivers. He shows good hand placement on the inside but lacks the play strength to sustain and will get yanked out of the way by defenders.

Meyers projects as the big slot WR and the converted QB shows promise.  There’s still some work to be done on his route running and hand usage but his hands, toughness and ability to make the contested catch are attractive.  He probably would need some seasoning but should make a roster as a 4 or 5 receiver who would need to help on special teams.  With continued improvement he could be that starting slot receiver in a couple years.