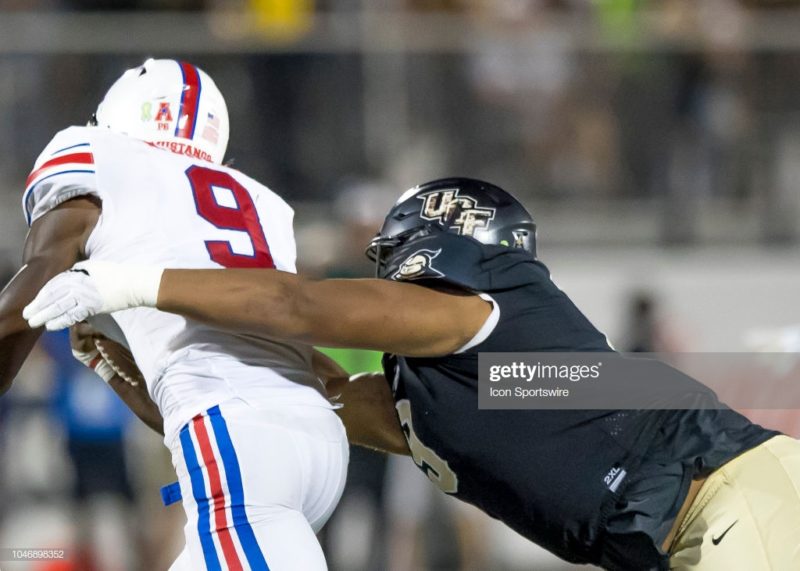 Trysten Hill (#9) caught my eye at the Combine.  He looked really athletic moving in the drills so I wanted to take a closer look. Entering the draft after his junior year at Central Florida where he started for his first two years but only started one game last year. That didn’t stop him from setting career high numbers in tackles, tackles for a loss and sacks.

He played primarily inside from 0 tech through 3 tech but had a few snaps over the tackle. Right from the get go he shows up because of his quickness at the snap. He’s the first guy to move consistently and gets his hands up quickly into the OL. Watching the AAC Championship against Memphis and he was constantly in the backfield. That quickness benefits him playing in a 1 gap defense and allowing him to be a penetrator to disrupt plays. He shows very good agility once back there move laterally to get to the runner. He has experience in 2 gap as well and generally plays with good leverage. That with his quick hands allows him to stand up OL giving him the opportunity to shed blockers. He’s improving in that area and has the strength move defenders to the side or down to get a chance at the runner. He’ll sometimes overextends out over his toes and gets off balance and struggles vs double team blocks

Vs Cincinnati it looks like he’s lined up over the left tackle that lets him release up field on the run away to get to the second level. He shows agility and acceleration down the LOS to get a hand on the RB ankle to help trip him up.

Vs Memphis lined up as the 1 tech a quick step to the right reading the OC movement then he gets sideways through the A gap plays through a push from the RG from one angle and TE from  another to reach out and make the TFL.

Vs Memphis lined up as the 1 tech to the left of the center. The RG tries to reach him and he drives him 5 yards back and into the runner to take him down.

As a pass rusher, watching him I see a Tasmanian devil. Just a tornado of activity with appendages flying and leaving a trail of bodies behind him. Again the quickness at the snap is there and his hands are very active. If he can learn to connect more to swipe and chop at the lineman’s hands he’ll be that much more effective. And he is effective despite low sack numbers. He gets pressure with quickness in gaps forcing OL to reach out and hook him or using leverage and strength to bull the blocker into the QB’s lap. He’ll use a rip, long arm and spin and has the agility to be used as a looper on stunts but currently gets wide coming around his teammate.

Vs South Florida he yanks on the center and swims his right arm over, absorbs the push from the RG and then plows through the RB to pressure and force the QB out of the pocket.

Vs South Florida this is the kind of effort his gives regularly. He’ll loop to the outside on the stunt and when the QB scrambles he gives chase 30 yards downfield.

Vs Temple as the 3 tech on the left side here is a good outside rip to get quick pressure on the QB.

Vs Temple as the 3 tech on the right this time he just uses quickness to come across the face of the LG to get the sack.

Vs Cincinnati he recognizes the swing pass out to his left and gives good chase to get the tackle when the RB cuts back inside.

Vs LSU this was one of my favorite plays. He’s lined up as the 0 tech and on this pass rush it takes nearly the entire OL to block him as 4 of 5 of them contact him at some point and he still nearly reaches out to grab the QB.

Hill was a fun player to watch with his quickness, athleticism and motor on display every play. I think his performance at the Combine may have opened some eyes. To find a player that can effectively play the run and get pressure on the inside is a huge need for teams. And there is room to grow improving on techniques like shedding blockers and using his hand as a pass rusher. He can come into Pittsburgh and work behind Javon Hargrave and be used occasionally in sub packages. I’m pretty high on this guy and would expect him to rise some over the next couple weeks.