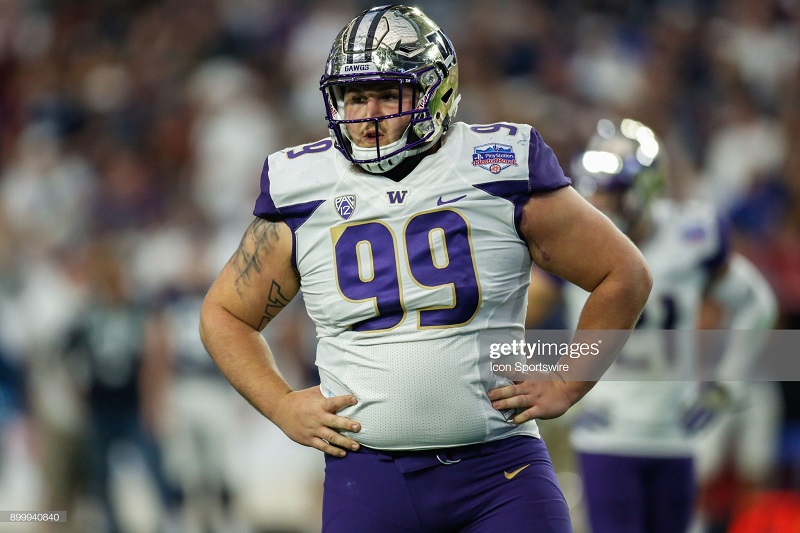 Greg Gaines (#99) might be playing in the wrong generation for his skill set. He’s a high effort player with a stout compact frame perfect for clogging interior running lanes. Unfortunately the NFL is geared toward the passing game.

He lined up primarily in the 0 – 3 technique positions, uses solid get off at the snap and gets his hands up quickly to keep OL off of his frames.  He shows the play strength to stack and stalemate vs OL and make plays in his gaps.  He’s late to disengage from the blocker and needs to speed that up to give him more chances at tackles.  He’s strong against double teams able to anchor when he stays square to occupy blockers and keep the linebackers clean. His lateral agility and COD is limited so he’ll struggle to get around down blocks and on runs to the outside and lacks the speed to make plays regularly outside of the hashes. Most of his tackles are in his immediate area.

Vs UCLA he uses good leverage to get under the LG pads. He’s able to shed and absorbs the hit from the RB but makes the tackle.

Vs Utah he lined up inside the LT. He release to his right and gets a good punch to stun the blocker to get him off balance enough to release and make a play on the runner to the inside.

Vs Utah he’s over the center. He reads the OC and moves right with him but with his eyes up he sees the pullers behind him. He breaks off back to his left and makes the tackle at the LOS

As a pass rusher, he has solid quickness at the snap but lacks explosiveness to stress the blockers. He will struggle with his hands to counter the opponent but he will try a variety of rushes including a bull, rip club and hump but didn’t have much success or get a lot of push. He has value as a contain rusher to keep the QB in the pocket and as the front of the twist to take out two OL to give his teammate a lane but that probably isn’t enough to keep him on the field for all downs.

Vs UCLA this is the first play I watched.  They leave him unblocked and he has a clear lane to the QB.

Vs Utah from the 1 Tech the loops right to contain from the outside and when the QB steps up he shows awareness to come off and help make a stop at the LOS.

Vs Utah from the 3 tech on the right, he cuts to the A gap and gets low while using a rip to get pressure up the middle.

Vs Ohio State here is a contain rush to the left but see the RB release to the outside and quickly gets outside to force a cutback and make a tackle.

Overall, Gaines is a throwback player.  That big bodied, high motor guy you stick in the middle of your defensive line to clog the running lanes. Unfortunately for him, those types of players aren’t in high demand anymore. He’ll make plays in his close proximity but doesn’t have the athletic ability to make plays to the outside or help in the passing game. That makes him a 2 down player.  He’d fit in a 1 gap scheme to fill and control one gap or in a two gap scheme if he can disengage more quickly. For the Steelers I think they’d want a more versatile player.