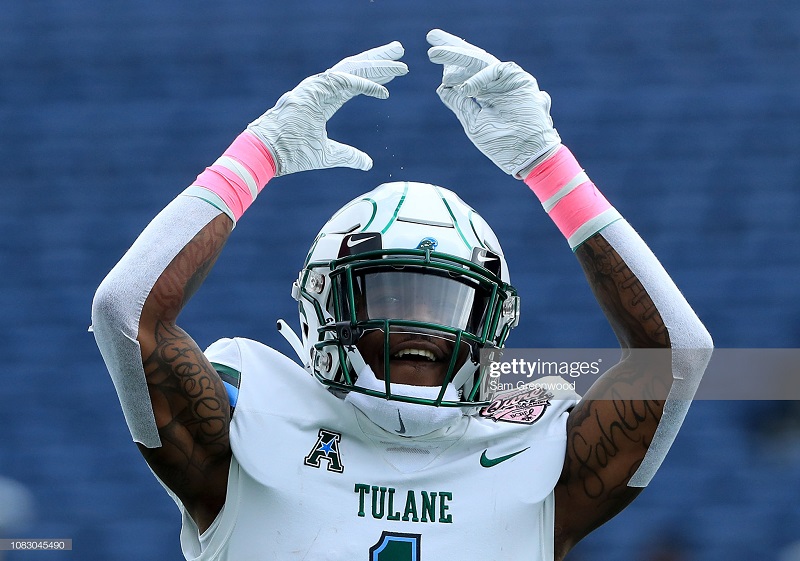 Donnie Lewis, Jr (#1) was a four year starter for Tulane giving him a lot of experience and 7 interceptions and 37 pass break ups in his career give him ball skills worth a closer look. He has a slight build checking in at the East West Shrine game at 186 pounds and arms (30 ¼ inches) on the shorter side.

He was primarily used on the outside but throughout his senior season he saw more work in the slot. In Press coverage he shows good patience and will use an extended arm to try to redirect the receiver.  He shows good footwork and loose hips to mirror the WR and open up and run with him. He has the speed to run the deeper routes while staying in phase. In off Man coverage he has a solid peddle and will stay deeper than his receiver. That’s good but it leads to him being too far off of the WR and giving up easy catches underneath. His COD to plant his foot and close from off coverage is just adequate also leaving space for the WR. In Zone coverage he shows good awareness and understanding of route combinations coming in and out of his area and will even break before the WR on occasion.

At Oklahoma (#21 as a junior) he shows good awareness on this flea flicker to let his WR go on the Cross and pick up the deep route coming from the other side.

Vs SMU he jams the first receiver with eyes on the stacked WR. Reads the route and closes into the backfield for the TFL.

Vs East Carolina it’s a quick slant and he’s right on it. Gets his hand across in front and may have just gotten a finger on it.

In the slot he played mostly in press and looks comfortable mirroring the WR with the speed to run with the WR on short and intermediate routes. His COD was better laterally able to stay close on in and out breaking routes.

At Ohio State in the slot vs Parris Campbell (#21) and he sticks with him breaking at the same time to get under the route.  Campbell starts to separate and Lewis dives to get a finger on it force a bobble but he makes the catch.

Vs SMU he follows the motion to the far side reads the slot doing a quick out and catches the errant pass for a 49 yards TD on the INT.

His ball skills are good and the probably should be better. He’s aggressive and likes to go for the ball but that is where the short arms come in. There were several plays were he had good, tight coverage and seemingly just missed, by an inch or two, breaking up the play. Play strength could be an issue as well. Bigger receivers were able to get space against him with a shove at the top of the route.

Vs Wake Forest press cover on the right.  Good patience to mirror and hand to redirect. It’s a quick out and he’s in good position, just can’t get a hand on the ball.

Vs Wake Forest in press on the right and the technique is good but the WR creates space at the top of the route with a push.

Vs East Carolina it’s a go route at the top of the screen. He’s got tight coverage, the WR gains half a step late, and the ball is just out of reach. Another inch or two of arm length could have helped.

He was willing to help against the run and was even used to blitz from the slot and the outsider. He’s not a physical tackler and the lack of play strength shows up here. He doesn’t bring a lot of power in his tackles and will slip off bigger ball carriers especially in face to face situations. He’s a better tackler on WR’s where it’s usually coming from the side or back.

At Oklahoma he’s the right corner (#21) and recognizes the run to the outside. He closes quickly and goes low but ends up missing. The willingness was there, the execution was not.

Vs SMU again the willingness to come up and help on the reverse. He tries to get a big hit but just kind of bounces off the ball carrier.

There’s talent her and the flexibility to play outside and the slot is desirable to teams. Scheme may be a determining factor in where Lewis will go.  I think his best fit is in a press Man heavy scheme to limit him having to play off the ball and come downhill. He’ll get a shot to play on the outside but slot may be where he plays the most. He can’t make his arms longer but adding some muscle could help him to handle more physical WR’s and may help in his tackling.