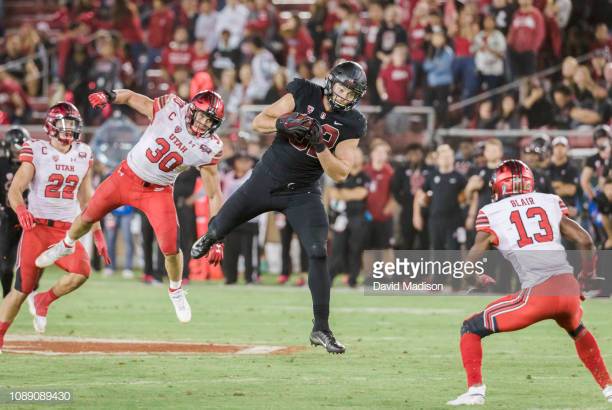 – Good catch radius, contorts to bad throws
– Fights for the ball with reach and position
– Can sky high for the pigskin and is a red zone threat
– Willing to work in the middle of the field while getting hit
– Strong, soft hands
– Lines up inline, wingback, in the slot or split out wide

– Needs a free release to do most damage
– Does not have much lower body power, gets more in defender’s way, than move them around
– One gear runner, neither slow nor fast
– Can get bullied in contested catch situations
– Doesn’t create much separation
– Gets knocked off routes to easily

Lined up as the wingback on a 2nd and 7, at the snap Smith shoots out low to seal off the backside Duck outside linebacker. #82 gets his hands around the defender’s waist and is spun around while holding on. He is bucked off and chases the Oregon player through the play. Thankfully the referees were watching the ball carrier’s side or the Stanford tight end would have been called for holding.

On a 3rd and 9, #82 lines up as an inline tight end split out about an extra yard from his left offensive tackle. At the snap of the ball, Smith cleanly releases from the line of scrimmage and races towards the seam. He clears the linebackers, turns around, and high points the ball for a nice reception in the middle of the field. The tight end’s body shielded the pigskin from the deep safety, but was immediately wrapped up while securing the catch.

Lined up as the inline tight end, Smith gets a clean release off the line at the snap and runs a short drag route about 2 and a half yards deep right in front of the linebackers. He catches the ball cleanly in stride, but is immediately wrapped up by the linebacker. While #82 can pluck the pigskin with ease, the tight end seems to lack the ability to break tackles or create separation which would be quite helpful at the next level.

#82 lines up as an inline tight end with an outside linebacker hovering around his outside right shoulder. At the snap, the OLB dips around Smith gives the Stanford player another free release. This allows him to get to full speed, racing past his inside linebacker coverage. The tight end creates a sliver of separation and tracks the pass well in the air. #82 jumps to catch the pigskin at its highest point and secures the reception as he falls to the ground. Smith could be a solid target at the next level if he doesn’t have to depend on his physical strength.

With the draft investment the Steelers would have to make with him, I would pass on this prospect as Vance McDonald can do all of the same things better and can block much better than Smith.