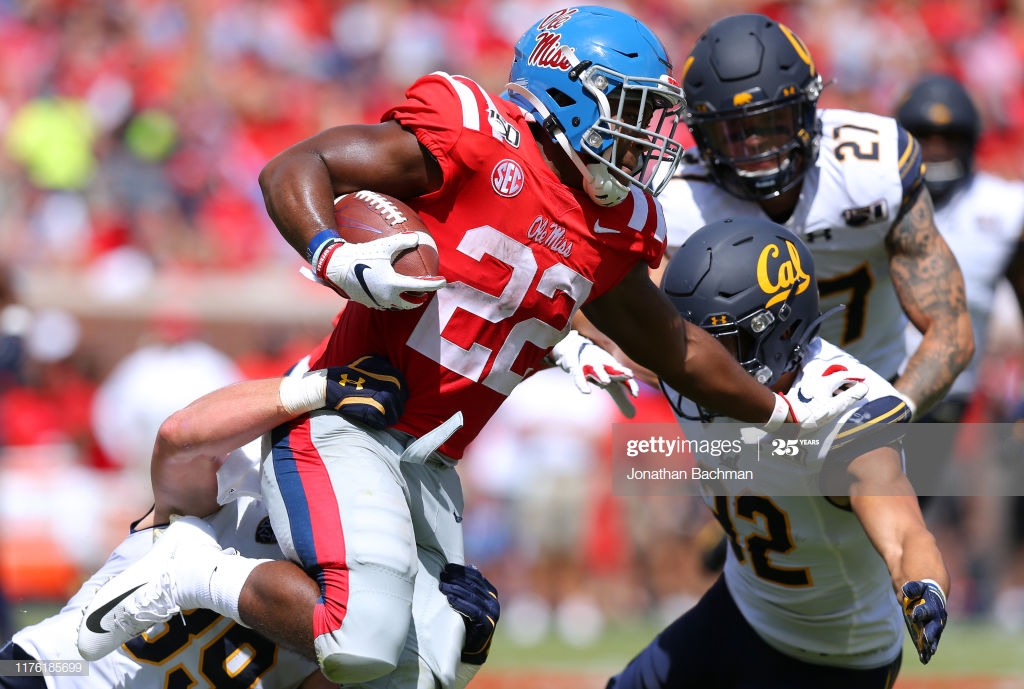 -Loose, explosive hips with some spring laterally
-Good vision and overall feel as a runner
-Quick feet to help him elude defenders in space; has a powerful stiff-arm
-Compact, powerful frame that will surprise defenders that challenge him
-Pad level is excellent as a runner; rarely open to big shots
-Good burst out of his cuts to chew up yardage and hit home runs
-Willing pass blocker with good awareness and strength
-Ball security is a major plus; shows soft, consistent hands out of the backfield

-Has a tendency to try and bounce runs to the edge and search for the home run
-Can be a bit too indecisive at times between the tackles
-Needs to improve technique when absorbing blitzers; weight can get out over his toes
-Severely undersized for the position (eighth percentile in height, length)
-Appeared to add weight in 2019 and looked slower than previous year’s tape

Sometimes throughout the draft process, you pop on the tape of a guy you didn’t know a ton about, and you get a great feel for them as a prospect right away.

Ole Miss running back Scottie Phillips fits that bill for me.

Right away, I knew exactly what I was getting with Phillips. Honestly, his tape study was some of the most fun I’ve had this year; it’s that good of film.

Phillips may be small, but he has loose hips that allow him to explode in and out of cuts. His footwork is really good too, which allows him to chew up yardage and make defenders miss in space, much like you see here.

He transfers his weight laterally with ease and doesn’t lose speed.

I am a big, big fan of Phillips’ footwork. It’s so efficient.

Arm tackles are a joke to Phillips’ lower half, too.

This is my favorite run by Phillips; he simply glides into his jump cut here and then explodes vertically for the home run.

He has a really nice balance of patience to set up defenders and the absolute explosion to rip off chunk runs.

Phillips’ ability to gather and jump cut like this behind the line of scrimmage, and then immediately transition to top speed is a thing of beauty. Alabama’s defense had freak athletes all over the place in 2018 and Phillips made them look silly with this run.

He’s small, so he’s able to get skinny between the tackles and slip through gaps to reach the second level. He doesn’t have elite speed to turn these types of runs into six points, but an offense should – and will – take runs like this all day long.

With him being small for the position, Phillips has to do a lot of things right. Fortunately for him, he does often.

Check out the ball security here. That’s two hands cradling the rock in traffic. He has the patience to let blocks develop while picking through traffic, and then lets the defender know he’s there with a powerful finish to the run, picking up an additional five yards after contact.

Overall, I’m a big believer in Phillips becoming at least a compliment in a backfield at the next level. He may be undersized, but he has some great tape and does all of the little things well. Plus, he has very little usage, which should leave him fresh heading into the pros.