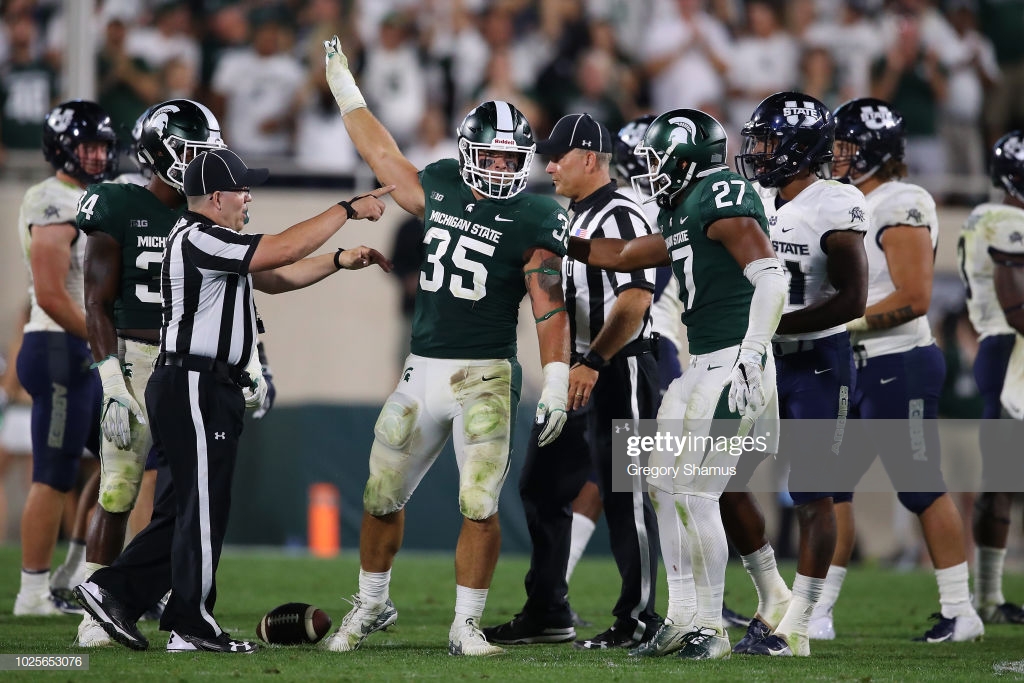 Linebacker Joe Bachie has been the heart and soul of the Michigan State defense for the better portion of the last three seasons. He has made 34 career starts and was named captain in each of the last two seasons. He was well on his way to another stellar season in 2019 before he was suspended for failing a PED test. While Bachie’s athletic limitations may hinder his ceiling, he is as solid as they come when it comes to being a run stuffing middle linebacker.

With his athletic shortcomings, Bachie cannot afford to be too aggressive when it comes to pursuing the ball carrier. Luckily for him, he rarely is aggressive and stays patient when diagnosing the run direction. He effectively works through the junk and is able to put himself in position to make a tackle more often than not. Watch on the play above as he stays patient and is able to avoid the pulling guard in order to make a tackle.

Bachie is also a very smart and instinctive middle linebacker. He is able to quickly diagnose and assess what is transpiring in front of him. Arizona State is setting up a screen pass on the play above and notice how quickly the Michigan State linebacker is able to decipher the play call and come downhill to make a tackle on the receiver. Once again, Bachie may not have the range to travel all over the field but with his instincts, he is able to put himself in a good enough position to make a play most of the time.

Bachie’s most redeeming trait that cannot be taken away from him is his pursuit to the football. He brings incredible hustle and heart as he always gives 110-percent when pursuing the ball carrier. Tasked with dropping back in coverage on the play above, watch as he comes downhill all the way to the sideline to come up with this tackle. Coaches love guys who bring the same energy on each and every down and Bachie’s tape guarantees that he never takes a play off.

Do not kid yourself. No one is going to describe Bachie as a three down linebacker who can play in space and coverage on a consistent basis though he did manage to make a few plays while in coverage. This is due to his football IQ as he showed a good job of watching the quarterback’s eyes and locating the football. He managed to grab his lone interception of the year by following the eyes of the quarterback and then impressively jumping a route.

There are more than a few concerns with Bachie’s game and most have to do with his lack of raw athleticism. As noticed on the play above, Bachie does not have the speed or natural fluidity when asked to play in space. While he fits the bill between the tackles, it is a different story out in space as this is where his stiffness really rears its ugly head.

Another issue on Bachie’s tape, though this one may be fixable is his lack of lay strength at the point of attack. On more than a few occasions, he is neutralized by offensive linemen once they reach him on the second level. The Michigan State linebacker is going to have to get stronger if he wants to be able to shed NFL quality linemen at the next level.

When it is all said and done, Bachie may have a very limited ceiling due to his athletic shortcomings but this does not mean that he will not have a home in the NFL. His game reminds me a lot of Tyler Matakevich, in the sense that he can carve out a nice role on special teams while serving as a depth option at the linebacker position. His football intelligence and very consistent tackling ability are going to be his selling point though he will need to polish up a few areas of his game.

Games Watched: vs Arizona State, vs Wisconsin, vs Ohio State,