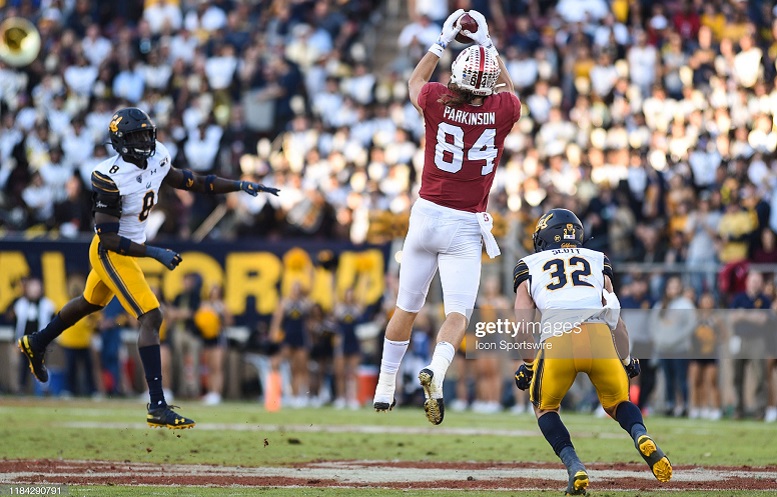 In three of the last four years a tight end from Stanford has been drafted and 7 have been drafted since 2010 out of David Shaw’s program. That group includes Zach Ertz, Austin Hooper and Levine Toilolo. Colby Parkinson is the next in line. He has a long, lean frame and huge catch radius with good athleticism. He lined up all over the offense including inline, slot, on the wing and out wide.

In the passing game, he has solid acceleration off the line of scrimmage from a 2 and 3 point stance and drops his hips well on short area routes.  He will use head and shoulder fakes and physicality to create space when breaking into his routes. He has very good hands and ability to adjust to the ball around is from while stationary or on the move. He’s a good red zone target with the size and play strength to box out defenders. After the catch, he’ll get yards if he has space and has solid long speed. The whole route tree is available to him and is good finding the soft spots against Zone. I’d like to see improvement on his explosiveness out of his breaks to create space. He didn’t break tackles in the games watched and wasn’t asked to pass block very often so it’s a bit of an unknown.

Vs Oregon State, lined up wide right running a Go route. He uses his size, strong hands and body control to make catch on the back shoulder and get the TD.

At USC, line up on the left wing running a Wheel route showing good hands, ability to adjust and with sideline awareness.

At Washington, in tight slot to the right he runs a Post routes and while drawing a holding penalty uses one hand to help corral the ball.

At Colorado, in a tight split to the right he’ll run a Seam route and adjust to the ball behind him I tight coverage.

Vs Notre Dame, he is inline on the left side and will use a good head/shoulder fake to create space on the deep Out and shows his catch radius reaching out in front of him.

In the run game, as an inline blocker he uses good positioning and competitiveness to handle his assignment and showed improvement over the year.  He has good awareness to pick up the most dangerous defender in his area and can handle players his size or smaller. He shows good quickness and shows the potential to be able to block on Zone runs. At the second level and in space he displays good effort and solid agility to stalk block and mirror defenders. He’s not a people mover when blocking despite keeping his feet moving not showing the play strength to drive defenders off their space. He also wasn’t tasked with blocking larger defenders dealing with linebackers and defensive backs.

Vs Washington, lined up inline to the right taking on the OLB and gets good position with hands inside to fight for position on this run.

Vs Washington, back to back plays. On the first play he is inline on the left side turning out and sealing the OLB to allow the running lane to the RB. Followed by a release from inline right to a drive route across the middle making the catch on the run.

There is a lot to like here.  He has the size, length and athletic ability to be a mismatch and an end zone target from multiple alignments on the field. His overall blocking is solid at this point and he has a good about understanding body and hand positioning and can sustain well enough to keep his gap clear. There is room to improve on the route running and creating separation and his Pass Pro ability is fairly unknown at this point. He could serve as the #2 TE and red zone target early and I don’t think it will be long before he is starting.

Games Watched:  2018 – Vs Oregon State, At USC vs Washington, At Colorado, Vs Notre Dame