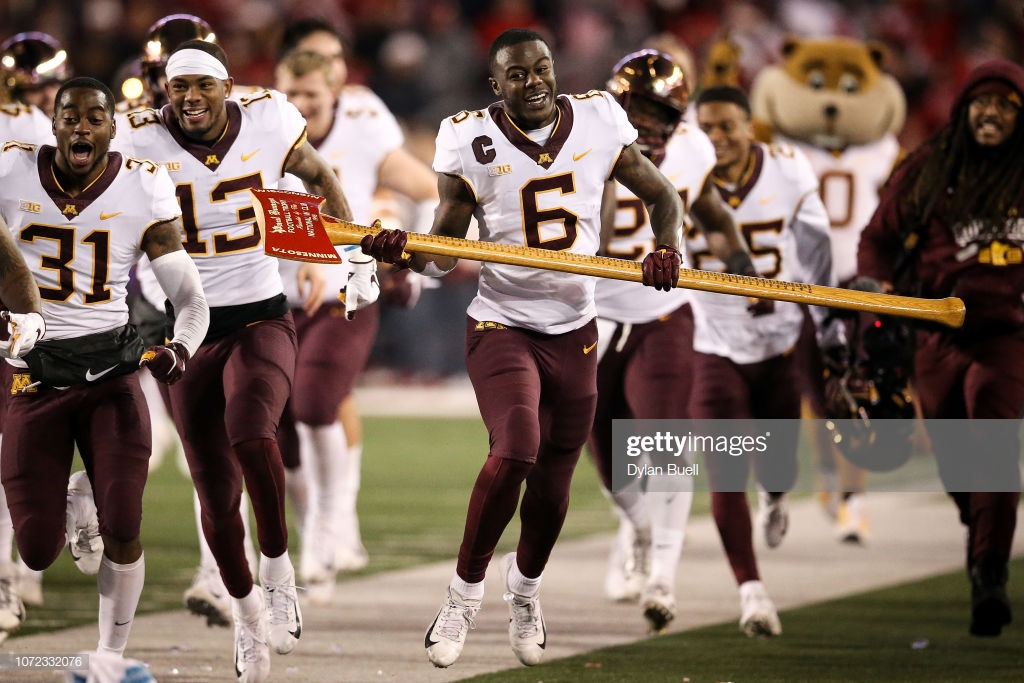 Tyler Johnson is coming off his best season yet and the senior wide receiver is ready to cash in on his big year during the upcoming NFL Draft. There are some similarities between Johnson and Pittsburgh Steelers’ receiver JuJu Smith-Schuster as they are both two bigger receivers that can use their size to their advantage in the slot.

Johnson’s size provides a big mismatch against the typical smaller slot defenders. While he is not going to blow anyone with his elusiveness or quickness over the middle, he will be able to outmuscle slot cornerbacks, which he shows on the play below. The Minnesota receiver quickly fights through initial contact before making a catch over the middle. He then makes one man miss and takes it all the way to the house.

Being a receiver typically consists of two parts – the catch and the set up. Focusing on the set up aspect, it is easy to say that Johnson does a fine job at setting up his routes in order to get separation. Watch how the senior receiver is able to make the defensive back bite inside before breaking towards the sideline. While he does not come down with the catch due to an overthrow, Johnson knows how to manipulate defensive backs with his eyes, head and feet.

Johnson does not specifically play just in the slot as he can more than hold his own on the outside as well. What makes him such a strong target no matter where he lines up is his physicality and contested catch ability. Whether it be in the slot or out wide, Johnson can climb the ladder and come down with the football. He does it on a slot fade pattern on the play below as he goes up and snags this football. With his nifty footwork (more on this later) and size, this will be very tough to defend at the next level.

Now, the talented Minnesota receiver can make these plays in the slot but can he make them on the outside against bigger and perhaps more talented cornerbacks? Well, the answer to that is a resounding yes. On the play below, Johnson is lined up out wide and he shows that he can fight his way back to the football in order to make a great back shoulder catch. There are also more than a few end zone receptions sprinkled across his tape that shows that he can be a force in the red zone as well. Physicality is the name of the game on the outside in the NFL and Johnson flashes more than a few positives that he could be a contested catch winner at the next level.

Perhaps the most intriguing aspect of Johnson’s game is his route running ability. He is an excellent route runner that runs very sharp and precise routes. Johnson has very quick and sudden feet and can make quick cuts at the top of his routes on a dime. Watch how he sets up this slant route with sudden footwork and by really sinking his hips into the route. That is an easy touchdown as he fools the opposing cornerback.

The final aspect of Johnson’s route running that I want to touch upon is just his overall football IQ. He is a mart receiver who understands what the defense is giving him and how to make the most of it. He can identify the soft spots in the zone easy and knows how to get where he needs to be. Watch how on the play below, he leans inside which the secondary keys in on as they expect an inside route. But Johnson takes advantage of the secondary cheating in and cuts back upfield and ends up wide open for a touchdown. It really is a perfect play as the outside cornerback expects to pass Johnson over inside but when he cuts vertically downfield, the cornerback is left in no man’s land and the inside defender is also playing catch up as the Minnesota receiver torches the secondary.

One minor complaint with Johnson’s tape is that he has been prone to a few drops every here and there. There is no doubting that he has strong hands but he does drop an easy ball from time to time. Probably more of a mental issue rather than a glaring red flag.

Johnson’s tape was very impressive and there are a lot of positives to take away from his game. He can dominate from the slot due to his size mismatch and route running ability. He is quick and polished route runner which will help him tremendously. When he is lined up outside, he shows he can get it done with his contested catch ability. Also can not forget to mention his football IQ, as he is also a very smart route runner who can identify not only soft spots in a defense but also how to open up a secondary to make a soft spot for himself. Arguably one of the most decorated receivers in Minnesota history, I see no reason why Johnson cannot continue producing at the next level.

Games Watched: vs Iowa, vs New Mexico State, vs Auburn, vs Georgia Southern