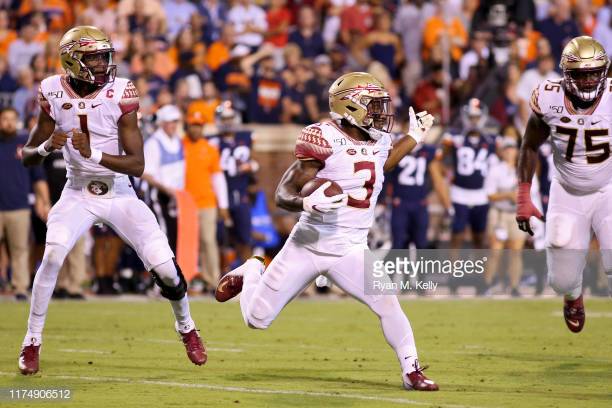 – Well proportioned body, thick frame with a well built hip base
– Shows great explosion in and out of his cuts, covers a lot of ground
– Can sink his hips with ease, very fluid and agile player who can string together cuts without losing much, if any speed
– Finishes runs with authority, often dishing out plenty of punishment to oncoming tacklers whether it be a stiff arm, or lowering his pads into them
– Flashes good balance through contact, is able to keep upright either through or after contact
– Gets after it in pass protection, shows good hand placement, keeps pads and base low, shows functional anchor, very aware of his responsibilities.
– Capable receiver out of the backfield that flashes the awareness to be able to leak out
– Eyes process quickly behind a very shaky FSU offensive line, shows good vision for an inside zone and gap scheme system
– Very young (20 years old) and still hasn’t quite reached his ceiling, ascending prospect

– Ball security, 3 fumbles this season but has 10 fumbles lost in his 3 year career at FSU
– Can overextend a little bit in pass protection, sometimes ducking his head
– Receiving game still a bit unrefined, sometimes leads to him juggling the ball before bringing it in, not a very big sample size.
– More of an inside to outside type of processor, not really a fit for outside zone at the moment.

Cam Akers had many of the recruiting world in awe of his athletic ability coming out of high school and that ability was on display during his freshman season. Akers is a physical specimen that will often have you in awe of the plays he can make.

This play here against Wake Forest illustrates this very well

Florida State’s offensive line has been a turnstile for a couple years now and Akers often had to make something out of nothing. The defensive lineman right here has a clean shot at Akers, but despite that Akers is able to see the cutback lane away from where the play is designed to be going (because he recognized that the play was dead at that point), he sinks his hips, makes an explosive vertical cut which allows him to erase the angle #23 had on the play and he’s able to keep upright through contact to get some more yards.

Akers’ blocking ability might be his best trait, there’s a lot of good examples on his film, but I feel this play against Boise shows everything that makes him a good blocker and what he can improve on.

Almost 300 lbs vs 212 lbs and Akers stones him at initial contact. Look how low Akers is before he fires those hands inside the chest (great hand placement) of the defensive tackle, cannot stress how great his technique is here. The only real bad part about this play was the fact he ducked his head right before the contact, so he couldn’t exactly see what he was hitting. If the FSU left tackle doesn’t allow the quick pressure here, the QB probably never gets lead into pressure from the defensive tackle.

Akers is far from a polished receiver and it shows at times with the lack of passes thrown his way, but he also flashes some great awareness and potential.

RBs have to be able to help their QB out in a pinch. Akers knows he’s gonna have a 1 on 1 with this linebacker, who looked like they were gonna blitz pre snap. He doesn’t blitz though and because of that Akers decides to sneak out knowing the empty space he has towards the field side. Akers sees his QB in trouble so he flattens his route and then does the rest after the catch.

The biggest thing for Akers though is getting more experience with catching the ball out of the backfield.

LB here seemed to be ready for the wheel route, Akers turns up field sooner though (I believe this is by design), gets his head back to the ball and is able to catch it for a TD. The issue was he bobbled the ball a good bit here before pulling it in. Like I’ve said before, Akers doesn’t have a ton of passes thrown his way, so he’ll likely have some growing pains when it comes to catching the ball early on, but he shows a good knack for getting open as illustrated on this play.

Akers main problem he’s gonna have to clean up when going into the NFL though is his ball security.

There are far too many fumbles throughout his career and I could not really pinpoint the exact reason for that, most of them occurred towards the end of runs though as he was either dishing out final contact, or ready to fall to the ground. Florida State’s coaching staff is one that has fallen under plenty of turnover and recently hired a new RBs coach in David Johnson from Tennessee. I believe better coaching could help rectify his fumbling problem in the pros.

If Akers were a bit more refined in his ball security and catching the ball out of the backfield, there’d be a lot of talk about him as the #1 back in the draft right now. It’s very likely he will blow up the combine and with the ability he has, his ceiling/potential is quite high. His floor isn’t quite low, but isn’t the highest either due to the ball security issue, which could lead to coaches giving him a short leash in the NFL. His blocking ability, vision and athletic ability though will very highly regarded.