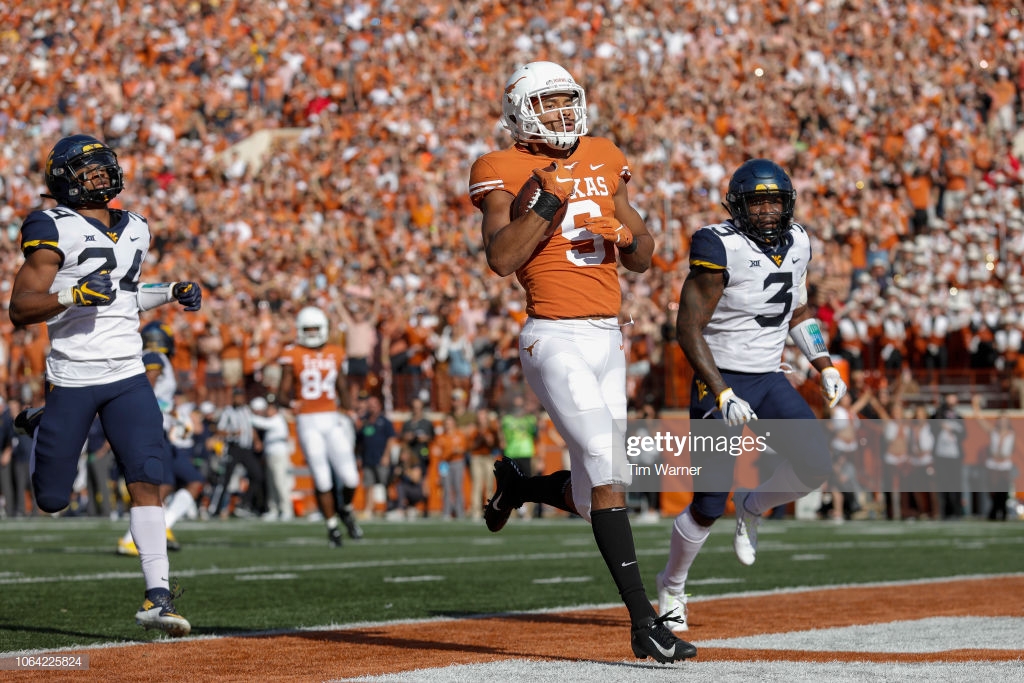 Collin Johnson elected to return to Texas for his senior season but he did not have the senior year he had envisioned as a hamstring injury forced him to miss a handful of games. While his stock may have been higher had he declared last year, especially considering this year’s deep receiving class, there is still a lot to like when watching the Texas receiver work.

For starters, Johnson may be the tallest or one of the tallest receivers in this year’s draft class. Standing at 6’6, the Texas receiver towers over the defense and this obviously gives him a huge mismatch when he is one on one with an opposing cornerback.

With his 6’6 frame, Johnson’s catch radius is elite. He can go up and pluck any ball out of the air. He also does a good job using his body to his advantage as he will use his body to shield himself between the ball and defensive back on inside breaking routes. Due to his large stature, most college cornerbacks were not overly aggressive with Johnson and this only played to his advantage. It is noticeable on the play above that the Texas receiver puts a lot of pressure on cornerbacks as he does a really great job stemming his routes.

Johnson is in the slot on the play above and watch how he perfectly sets himself up for this slot fade pattern. The 6’6 receiver really sells the inside break by taking an inside step and by leaning his body inside. The much smaller slot cornerback is now in no man’s land and is no match for a jump ball against the tall Texas receiver.

For a very tall receiver, Johnson shows a ton of upside with his route running. He does a good job using his hands to defeat cornerbacks one on one and that is on display above. Watch how Johnson keeps the cornerback guessing before using his outside arm to swim over the cornerback, giving him the leverage he needs. A nice breakdown at the top of the route gives him just enough separation to come down with this pass.

This route here is a thing of beauty. Johnson quickly defeats the opposing cornerback by once again swimming over them with his outside arm. He then breaks to the inside very smoothly and efficiently. Johnson is far from being the most athletic player on the field but his ability to really sink his hips and get inside is a great sight to see. He then caps it off with a diving catch, showing off his strong hands.

Johnson is not going to amaze anyone with his burst off the line of scrimmage, that is simply not his game. He wins with his footwork, which is something you notice time and time again after watching his film. Cornerbacks that cannot press Johnson are asking for trouble as he does a really good job selling his release before breaking to his intended route.

Now, Johnson was fortunate in college as few cornerbacks really had the skill to press him in man coverage but when they did, the Texas receiver struggled to create separation. The USC cornerback gets very handsy with Johnson in his route, not allowing him to be deceptive with his footwork and this limits Johnson’s ability. He may struggle to separate against physical and stronger cornerbacks at the next level.

Another red flag is his lack of athleticism. Despite looking like a deep vertical threat, Johnson may have a tough time being one at the next level as his lack of speed will rear its ugly head. He is going to have to rely on his contested catch ability to win those vertical routes but luckily for him, his 6’6 size gives him a huge advantage.

Final thoughts on Johnson – he is a physically gifted wide receiver that has a large catch radius. His route running ability is certainly very good for his size as he really does a great job stemming his routes. He may not separate well but with his footwork and swim move, there is optimism that he can himself enough separation at the next level. He is also a very willing blocker downfield which will make many teams happy.