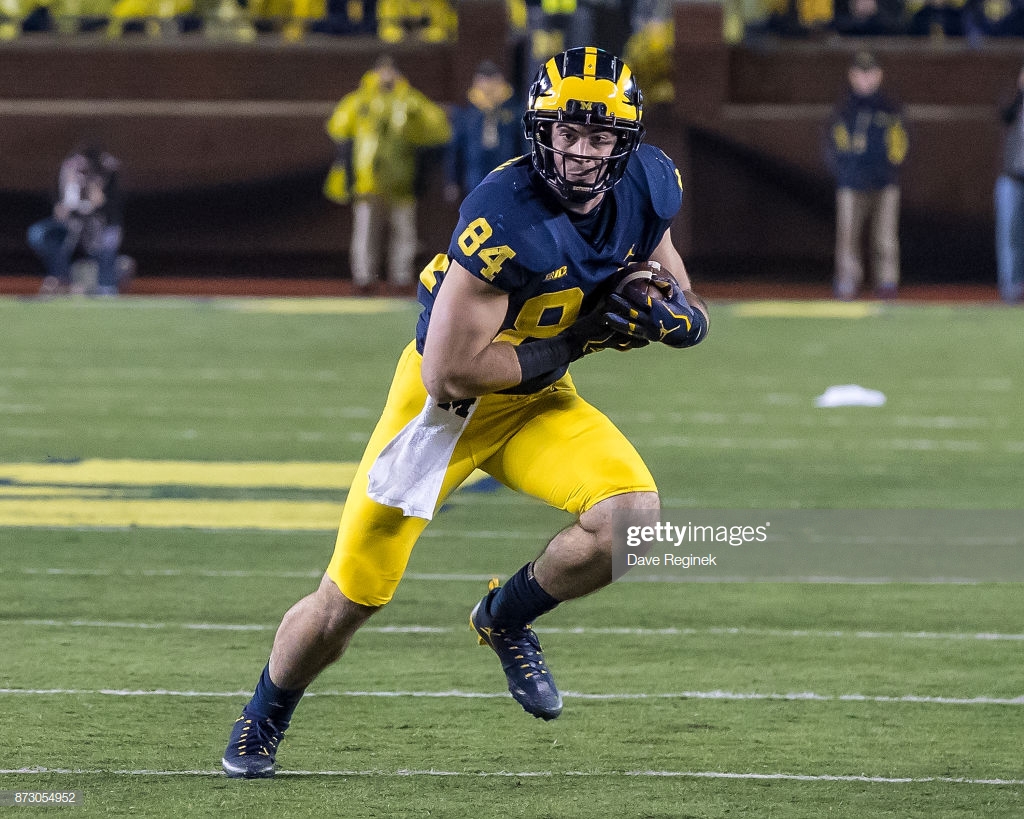 – NFL frame and size, looks the part
– Well-rounded, versatile player with experience as a receiver, run blocker, and pass protector
– Lots of experience out of a three-point stance
– Above average blocker, especially for the level, understands leverage and angles well in the run game, sets hips to seal linemen/linebackers
– Works hard to drive his feet and generate movement on his blocks, upper body strength to wash defenders down
– Shows effort and ability to overpower players in space as a blocker
– Technical route runner who doesn’t drift/freelance on his routes
– Soft hands and tracks/adjusts to the ball reasonably well
– Capable of beating zone coverage, football IQ to find soft spot and find windows
– Works to keep feet moving in pass protector though predictably overmatched against most 4-3 ends

– Below average athlete who lacks burst and won’t run away from anyone
– Struggles to create separation against man coverage, will have to use size to win
– Not a threat after the catch, will occasionally break a tackle by a poor-form DB but offers little unless he has a huge runway
– Ran simple route tree
– Needs to get head around quicker as a checkdown option
– Low production that decreased later in his career, generally an afterthought in the progression of the pass game
– Often used in a rotation and didn’t have to be an every-down player

Given the fact the Steelers just drafted McKeon’s teammate last year, Zach Gentry, I’m sure most fans are wondering how he compares.

McKeon isn’t like Gentry. He’s played tight end his whole career. He’s a little shorter too so leverage comes more natural to him. He’s a technical player in all aspects, route running and blocking, who understands pad level, hand placement, and getting his hips set. On tape, it looks good, especially when we’re talking about the college game. I’d be hesitant to call him the best blocking TE of his class but definitely one of the better ones.

Watch this combo block. Down block the DE, then climb to the LB. If the RB had made the correct read, cutting off McKeon’s inside hip instead of bouncing it, this would’ve been a successful run.

And while he is far from great in pass protection, he did it. Coaches gotta have some confidence in you as a blocker to take on Chase Young, arguably the most talented player in this year’s draft.

As a receiver, he’s got a solid pair of hands and understands how to work himself open. Clip from 2017. Curl working against zone coverage. Settles down in the window between the two linebackers and makes the reception.

But that’s about as good as it’s going to get as a receiver. He’s not fast, he’s not explosive, he’s not much of a downfield threat unless the defense just forgets about him. Facing man coverage versus Maryland in 2018, he’s getting no separation here.

McKeon is a pretty easy evaluation. Plus blocker, technically sound player, limited upset. See a lot of Nick Vannett in him; at least, Vannett as a Seahawk, not his struggles in Pittsburgh. At his best, you’re getting the next Maxx Williams. At worst, Jim Dray.

Sometimes those block-first types do go higher than you think because they’re hard to find in the college game. Look at Drew Sample last season. Still, while McKeon is a “safe” player, as far as draft picks go, he’s never going to be a clear #1 starter.