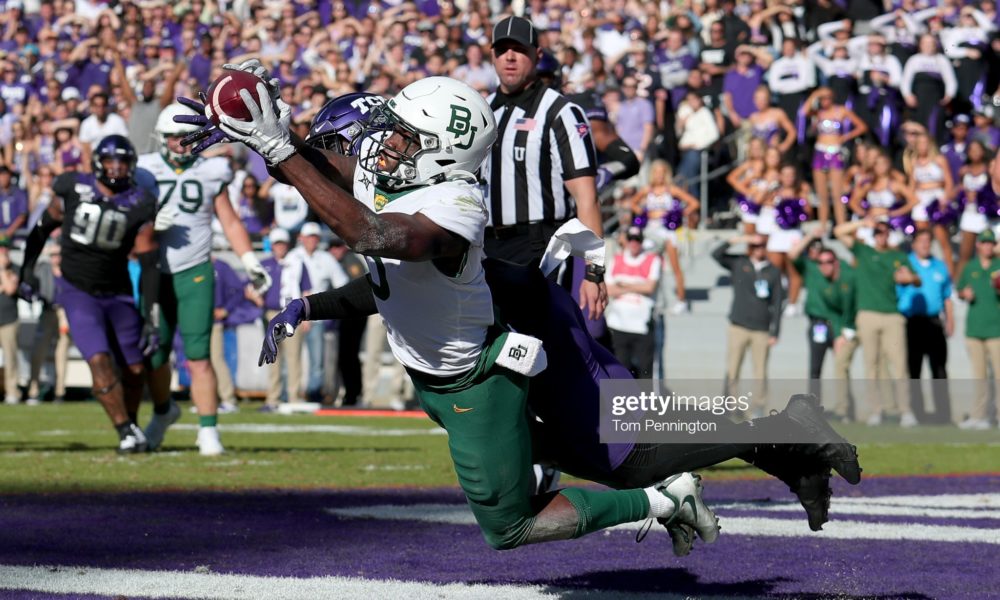 – Monster frame, fills it out well, “get off the bus first” type of intimidating body type
– Elite “above the rim” player, routinely catches tough throws over his head or outside his frame, makes the tough plays look easy and consistently produces highlight-reel moments
– Strong hands, always plucks the ball away from his body, finds and adjusts the ball as well as you could hope for
– Attacks the ball at its highest point, wins 50/50 balls at absurd rate
– Great body control and ability to contort to the throw, big-time threat on back shoulder throws
– Takes pride in run blocking, shows impressive effort and strain to block through the whistle, doesn’t take plays off and willing to be physical
– Uses size to shield and box defenders out on underneath routes (slants/curls)
– Good hand use at the line of scrimmage, technique and strength to beat press coverage and stack cornerbacks
– Doesn’t show false steps on his release and keeps his hands up at the LOS to better defeat jams
– Experience playing on both sides of the field
– Used to making sight adjustments and reading coverages
– Strong level of productivity, box score on its own shows number of big plays he made but also proved he could be a volume player in an every-down role
– Lots of starting experience

– Build-up speed runner who won’t burn defenders, causing most catches to be contested without much separation
– Needs to maintain speed through his cut, will slow down on some routes, especially slants as he’s anticipating the football
– Predictably a bit tight-hipped and though he can do damage after the catch, wouldn’t be considered elusive
– Outside receiver who lacks slot value, “Z” type who may be a bit position limited at the next level
– Afforded lots of space given layout of his offense, will have to play in more confined spaces in NFL
– Route tree needs to be more well-rounded; slants for three step-game, curl for five-step, seven for vertical concepts

It’s hard not to smile when you watch Mims on tape. Few guys make the number of did he just do that highlight reel catches. And they aren’t one-off kind of things. He does it routinely, consistently and it dominates his tape. I’m not sure if I’ve ever seen a guy have these moments this often the way Mims has. Here’s just a sampling.

Even on his incompletions, he can still make spectacular looking plays.

Baylor receivers, and most who play in a spread system, generally get knocked for not caring about blocking, using runs as chances to take plays off and catch their breath (sometimes that’s been by design too). Not Mims. Maybe chalk it up to the head coach change, so you’re seeing a different coaching point now as opposed to watching say, Corey Coleman a few years ago, but Mims loves to block. And he obviously has the frame to do it.

Though he’s a long-strider, Mims needs to run his routes harder at the break point. Tends to slow down waiting for the football, like this slant. If he runs hard through this, I think he breaks the CB’s tackle. Instead, he doesn’t gain much YAC.

And because he isn’t a twitchy player who is going to separate, Diontae Johnson he is not, most of his catches will become contested. The good news is Mims wins in those situations more often than not, it’s his best trait, but throwing to a covered receiver generally isn’t what coaches are shooting for in their gameplan.

The “big” receiver can be tough to evaluate. For every Michael Thomas, there’s a Laquon Treadwell. Or sometimes you get an inbetween type in say, the Chargers’ Mike Williams. I imagine Mims will get comps to DK Metcalf, coming off the success he had and the hindsight silliness of his three-cone obsession. I don’t see that level of straight line speed but Mims is a prospect who can make an impact right away at the next level with his vertical, hands, and downfield ability. I’m not expecting him to be available when the Steelers pick at #49 though, full disclosure, I didn’t expect Metcalf to fall where he did nor did I anticipate Pittsburgh taking Johnson as high as they did. So maybe I’m not the best gauge for these projections but I’ll say – with confidence – Mims is a great prospect.

Can’t wait to watch him at the Senior Bowl.