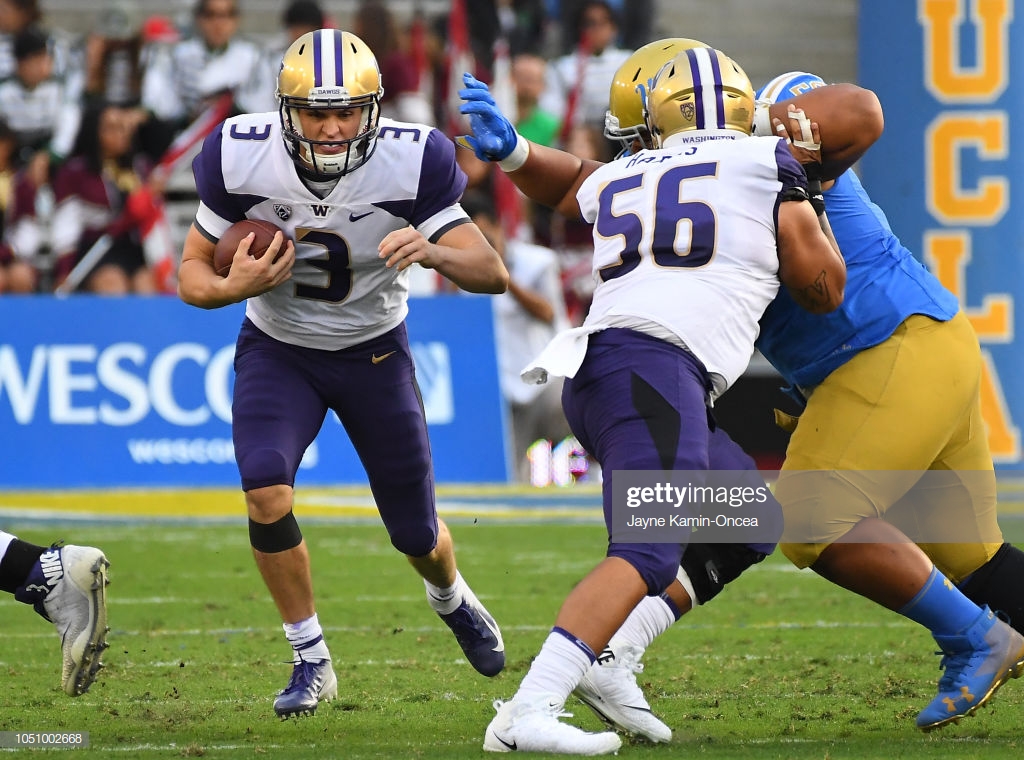 Harris is an athletic, versatile interior offensive lineman with starting experience at all three spots. Listed at 6’1” he is a bit undersized. Washington uses Zone and Power blocking schemes in their running game.

A starter for the last two years at center he was a good pre snap communicator and good football IQ getting the blockers on the same page. He shows good quickness at the snap and has as strong base using his natural leverage against defensive lineman. He’s not a people mover relying on quick feet and good angles to wall off defenders on down, drive and pin blocks. He carries his hands low on these blocks and will rely more on body lean but doesn’t get a lot of push.  He is effective on double teams getting hip to hip with his guards. His athletic ability allows him to pull on outside runs and is effective out in space. Interesting note, on QB sneaks he was very effective able to get low and burrow under the 0 tech to soften the area in front of the ball. I saw 9 sneaks and 7 were effective with the other two being penalties.

Vs California, he will lead the pull outside to the left and block on a big gain in the red zone.

On Zone runs Harris is at his best. He has the quickness and lateral agility to execute reach blocks on outside Zone runs in either direction. On inside Zone runs he shows very good timing on his combo blocks to get push at the LOS before moving to the second level coming to balance and executing on the second level versus linebackers or safeties. On screens again his athletic ability comes into play and shows good mental processing when determining to continue up field and take on a DB or to hinge back and cut off would be pursuers.

Vs California, an outside Zone left run he’ll jab the defender at the LOS to help the backside guard and get to the second level to wall off the ILB.

Vs Oregon, here is a nice reach block to his right. He gets a little help from the RG and gets his feet around to the outside shielding his runner.

Vs Utah, this is a screen to the left and he gets outside and will hinge back to pick up the pursuing linebacker.

In Pass Pro, he is quick to get set after the snap and plays with good balance and leverage. When covered up he is solid one on one and shows a good anchor with good core strength and will hop to reset and dig his heals in to stop power rushers.  Defensive tackles with quick hands can beat him to the punch and get in the A gaps against him. When uncovered he keeps his head on a swivel looking for work and is quick to help out a teammate. They also used him to block on the edge on run fakes that had him pull to the edge and did a solid job to push outside rushers up the arc.

Vs Oregon, a good rep one on one in Pass Pro moving with the defenders and resetting his feet.

Vs Oregon, with the play action fake he’ll pull to the right to set up and take on the edge rusher.

Harris is a good prospect with a lot of experience and a good motor always looking for someone to block.  Ideally, he would go to a team that is runs a Zone heavy blocking scheme to utilize he quickness and athletic ability. He is undersized but that isn’t a complete deterrent.  Guys like Ryan Kalil, Shaq Mason and A.Q. Shipley are all of similar size and have carved out careers.  His measureables particularly his arm length will have a say in where he gets drafted. If his arms are 32.5 inches or better he could go day 2. If they are less than that, he may go later. It’s likely some team will fall in love with his athleticism and get a good center.