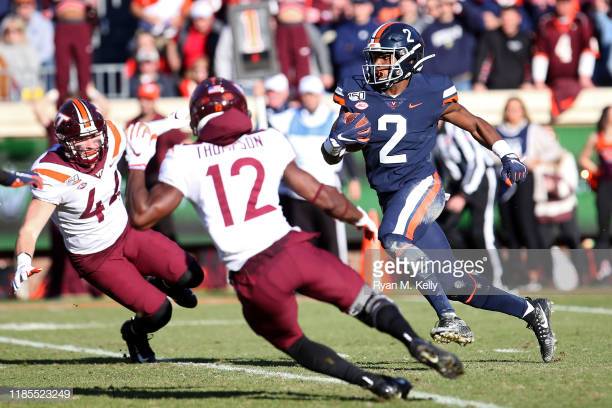 – Good size and fills out frame
– Versatile player, capable of wearing lots of hats, natural with the ball in his hands
– Quick to the tuck after the catch, YAC threat with functional strength and good open field speed
– Strong hands and able to make difficult catches in the air, finds and adjusts to football well
– Prolific kick returner with downhill nature but lateral agility to make people miss in open grass
– Creates separation at top of route on short/deep concepts (speed out/corner are his best)
– Proven ability to be vertical or an underneath/volume threat, won in different ways based on offense’s needs
– Quality starting experience and durability, didn’t miss time and no major injuries to note

– Lacks some detail in route-running and wasn’t much of an intermediate threat
– Needs to run through routes more often, will turn head around too early and lose speed
– Works to find open grass to settle against zone coverage but often drifts into the next window and into defenders
– Will leave feet too often for short throws he doesn’t need to jump for, limits YAC ability
– Loses out in some contested situations downfield
– May struggle to find defined role/fit at the next level, where does he function best?
– Great kick return value but didn’t return punts in college at any point in his career (why?)
– Only one year of heavy production
– Leaves hands low in stance, will struggle to release versus press coverage (though didn’t see much of it in college)

I’m starting my draft profiles with Reed because he’s become the most popular name suggested to me since the Steelers’ season ended. And hey, he’s a wide receiver from the Virginia area. It’s basically guaranteed Mike Tomlin will draft him.

After watching Reed’s tape, I see the value he brings to Pittsburgh. But before we talk fit, let’s breakdown his game.

Reed has been one of college football’s best kick returners the last three seasons. Five runbacks aren’t an accident. He can change the momentum of the game with his impact in the kicking game. Two clips of his five career scores for the Cavs.

As a receiver, he’s been used as a primary vertical and underneath threat. In 2018, he caught only 25 balls but averaged 18.6 yards per grab. Last year, his average fell by nearly ten yards (8.8) but he led the team in receptions with 77. Lot of underneath stuff. I bet no receiver ran as many speed outs as Reed did.

But he can still get vertical and has the flare for the dramatic. Check out this one-handed grab against Virginia Tech (this is from 2018 when he was a primary deep threat). One of the top grabs of the year.

He’s even gotten looks as a runner, you see the numbers he put up in high school, and feels natural out of the backfield. Here he is on a counter run.

Where does he struggle? Some of the little things. Like his stance. Carries his hands low. You’re not going to beat press that way. To be fair, that looks like something that just didn’t get coached, college doesn’t see as much press and maybe they were ok with them just being in a comfortable stance, but something that will need to be addressed.

More importantly, some small stuff with his game. Drifting too much when he tries to settle versus zone coverage, leaving his feet on too many catches (shown below) all things indicative of a guy who hasn’t caught a ton of passes in college.

I also didn’t see him work much in the middle of the field. There was the quick and deep game. One-step, three-step, seven-step. Reed is a little raw, not as well-rounded as some others will be, and that’s going to hurt his stock.

I’m not the biggest guy into making NFL comparisons but I see some Cordarrelle Patterson in his game. A bigger-bodied wideout with a RB skillset and definite playmaker in the return game. Reed would slide in well with what the Steelers are looking for. Someone who can win short and long and potentially transcend this woeful kick return team that at this point, probably just needs an elite talent that can make one or two “did you see that” caliber plays a year to make that unit serviceable.

Projections this early are difficult, especially with me personally just starting this draft process so take them with a grain of salt. Reed looks like a Day Three player, obviously there’s a big range there, but with a strong Combine workout, I can see him being taken closer to the start of the final day than the end.