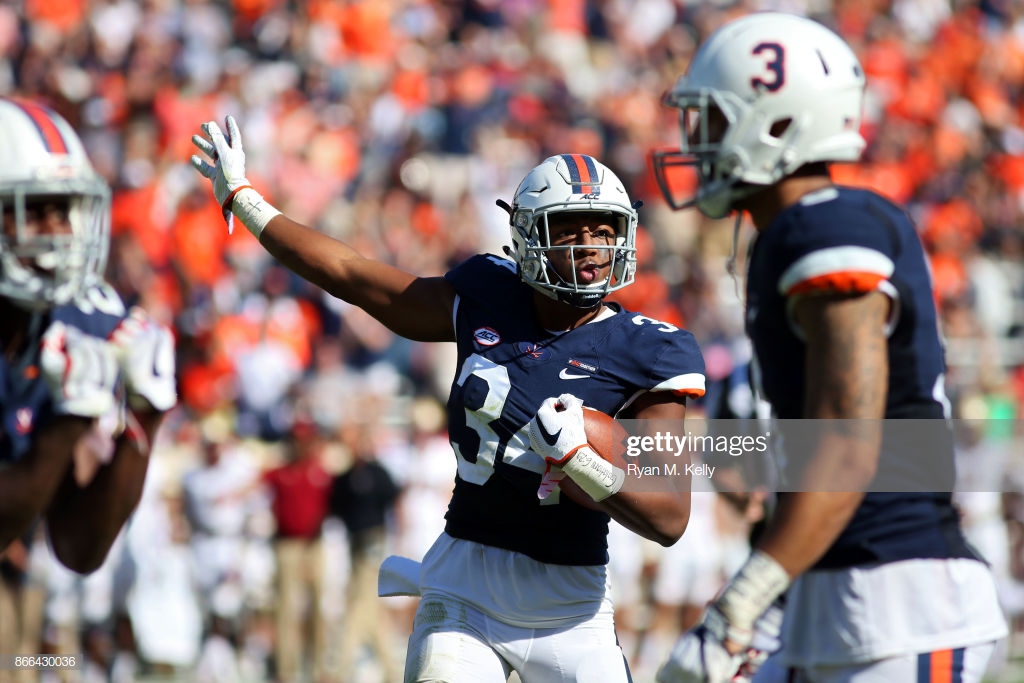 Coming into the season he was the number 1 ranked defender according to Pro Football Focus. He was rarely tested during his senior season before it was cut short by a broken ankle while covering a punt versus Miami. Prior to the injury, he was putting up some impressive numbers including leading the FBS in pass break ups as a junior. Hall as good size and length and has played on both sides of the field.

In Press Man coverage, he is patient with his feet and able to mirror receivers at the line of scrimmage.  He uses his length to get his hand on receivers to redirect them in the stem. He displays smooth hips able to flip and run with receivers. He shows good change of direction to stick with WR’s coming out of their break and will take good angles to undercut routes to the inside and outside. He displays good play strength on deep routes and is adept at using the sideline to his advantage while staying on the hip of the WR and gets his head around to locate the ball. The do use him to blitz off the corner as well recording 5 career sacks. He isn’t quick twitched and has build up speed so WR’s with very good burst and acceleration may give him trouble. Additionally, he will lunge to jam the WR at the LOS and someone with good use of hands could get him off balance.

In Off Man, he shows a smooth back pedal and can play with eyes on the WR or on the QB. He reads the play quickly and is solid getting downhill versus screens and short area routes. He attacks the ball in the air every chance he gets and has the length to reach around and over WR’s to break up the pass. Ideally he could match up the bigger WR’s and even TE’s. In Zone coverage, he was often used in the underneath areas as well as the deep third in Cover 3. On the deep coverage he has a good understanding of route combinations and where he needs to be. When in Zone underneath, he didn’t seem as comfortable and seemed more anxious with multiple WR’s in his area but had enough short area quickness to close on the ball.

At Duke, he’s in off Man coverage on the quick out. The WR will press inside before breaking the quick out.  Hall is patient slides with the WR and takes good angle to break up the pass.

At Duke, one on one at the bottom of the screen he going to use good body positioning and play strength to keep the WR on the sideline and  put himself in line to make the interception.

Vs Florida State, good communication pre snap and he reads the screen right away, beats the block and gets the tackle for a loss.

Vs North Carolina for two plays. He’s on the far side of the field. The WR’s route actually gets him to turn his hips to the outside before the WR breaks on the Post route. He’s able to recover and break it up. The second play is another play on quick pass at the LOS coming up to make the play.

Vs Florida State, here is bad play in a bad situation. With 90 seconds left in a one score game he jumps the fake on the stutter and go. Luckily for him the ball was overthrown. Better understanding of the situation was needed here.

Against the run, he shows good mental processing to diagnose quickly and he is willing in support to set the edge and take on blocks to force things inside.  He is a solid tackler but he isn’t a forceful tackler due to deceleration at the point of attack and he will dip his head.

At Pittsburgh, he’s on the left side of this run play will work through the block to make the tackle near the LOS.

Hall has the size, length and ball skills you covet in an outside corner.  I think he looks most comfortable in Press Man coverages and in Zone coverage. The questions for him will be his build up speed and if it will be fast enough at the next level and how and when the ankle heals.  Some teams may deem his speed not enough and could move him to safety.