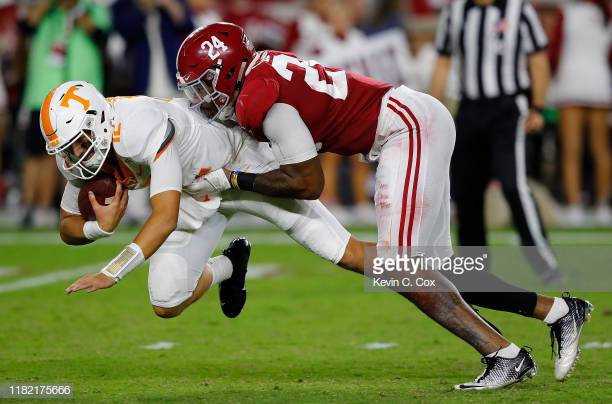 -Looks the part of a pro pass rusher with a rocked-up frame and long arms
-Knows how to use his length to his advantage against offensive linemen
-Has a mean long arm as a pass rusher that stuns tackles
-High-end burst off the ball on stunts and twists; rarely wastes movement on stunts and twists
-Violent off the ball rushing the passer; wants to inflict pain on OL, rather than win with finesse
-Shows lock-out ability when playing the run to shed and make a stop
-Processes quickly against the run and is rarely fooled

-Very limited, basic pass rush repertoire
-Relies too much on stunts/twists to generate consistent pressure
-Uncomfortable, stiff and robotic dropping into space; doesn’t have a feel for zone coverage
-Conditioning pops up as an issue on film, especially against up-tempo offenses; tends to take plays off
-Motor is a concern; doesn’t offer much effort as a backside defender in pursuit
-Effort against the run is concerning as snap count rises
-Significant injury history as a college athlete
-Limited experience in college; played just 26 games (15 starts)

Alabama EDGE defender Terrell Lewis may have been one of the most tantalizing players in all of college football the last few years.

Unfortunately for not only himself, but the Crimson Tide and its fan base, Lewis struggled to stay healthy throughout his career and didn’t quite make the impact many expected from the former 5-star recruit from our nation’s capital.

Lewis certainly looks the part in pads and will be a guy that should strike fear into opponents the moment he steps off the bus or plane. But as you know, that’s now how football is played.

During his four years at Alabama, Lewis played in just 26 games, starting just 15 of them. That helps explain the lack of production (just 8.0 career stats). In recent years though he’s been a regular on Alabama’s vaunted defense.

When I say he looks the part, he’s 6’5, 252 pounds. He has the ideal build and length for the position. He looks like he could touch his knees while standing up without bending over.

The problem is, he doesn’t have much feel for rushing the passer as he’d rather create contact and try to power through defenders, rather than win with finesse. He’ll have to learn to do both at the next level.

When he uses his length as a pass rusher though, look out.

This long arm here against Florida State in 2018 is a thing of beauty. He has great hand placement here, punching his palm into the tackle’s breastplate, stunning him. Once he has the hand placement, Lewis drops his pad level and powers through the lineman, applying pressure to the passer. It doesn’t go down as a sack, but it rushes the pass. Pressure is just as important as a sack.

He wins consistently with the long arm; the problem is, that’s really his only move. He doesn’t use his hands that well in combat, so it’s imperative that he hooks on with a pass rushing coach and develops his hand usage, giving him counters and other ways to win.

However, his defensive coordinators at Alabama saw how athletic and explosive Lewis off the ball, so they helped scheme ways for him to win on stunts and twists. Really, he’s so efficient on twists that it’s nearly impossible for interior offensive linemen to pick him up.

Against Duke to open the 2019 season, Lewis got after the Blue Devils’ quarterback on stunts and twists. He’s flat-out untouched here for the sack.

Watch his feet out of his stance first. There’s no wasted movement here from Lewis. He’s quick, balanced, and works laterally quickly before exploding up the field. Now, watch his hips.

They swivel so quickly and have so much power packed into them. It’s really impressive to watch.

His best twist came in the 2018 National Championship Game against the Georgia Bulldogs following the 2017 season. He came back from injury that saw him miss 10 games to play in this one. He made a huge impact.

Georgia’s offensive line was no slouch. Lewis wrecked it.

That twist with current Washington Redskins defensive tackle Da’Ron Payne is a thing of beauty. There’s no wasted movement laterally, which allows Lewis to plant his foot in the turf and burst upfield for the huge sack.

While he should have all the tools to develop into a strong pass rusher, Lewis will make an impact right away at the next level as a run defender.

He has the ability to lock out on blockers, use his eyes to find the football, shed and make the play.

Now, this play above is against a block from a tight end, so keep that in mind. However, the traits you want from a run defender are there. He stacks and sheds, plays through an uncalled hold, and makes the stick and stop near the line of scrimmage.

But when facing an up-tempo offense, Lewis’ conditioning comes into question due to the reps on tape where he’s clearly taking plays off or putting in minimal effort. Unfortunately, that shows up on run plays more than anything.

He won’t pursuit with fanatical effort from the backside, and he’ll lean into blockers and will guess, which leads to trouble.

That’s not the explosive get off that I saw a ton on tape. After that slow get-off, he leans into the Auburn right tackle to tangle, guesses wrong by peeking inside, and then is clunky getting off the block, leading to the explosive run by Auburn’s running back.

Final thoughts on Lewis as a prospect: he’s certainly going to test well and will look incredible – almost superhero-like – in shorts and shirts, but he’s just so darn raw and doesn’t have a dominant trait that it’s hard for me to invest anything more than a second rounder on him. If he can shake the injury bug and develops a pass rush repertoire though…look out.