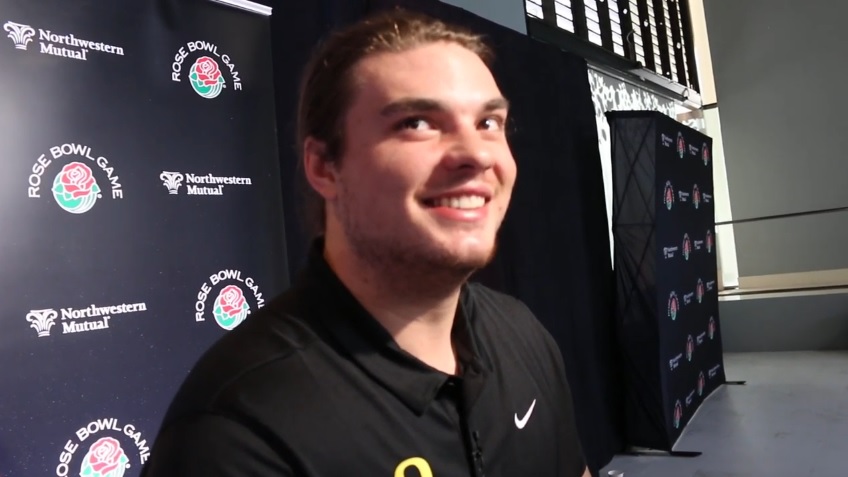 -Physical, tenacious play in the run game at initial point of attack
-Works to second level efficiently and packs power in initial punch
-Processes stunts and twists very well and is rarely fooled; excellent communicator
-Constantly looks for work in pass protection
-Able to sink hips and anchor against bulls rushes
-Won’t find him on the ground often; very good balance and strength for position
-Didn’t see him a commit a penalty in 5 games watched

-Struggles to consistently finish blocks
-Needs to develop more leg drive as a blocker to be able to move guys at next level, especially in run game
-Can get caught overextending in pass protection, leading to lost reps
-Seems a bit stiff overall on tape and isn’t a great mover in space

-Rated top 3 guard in the nation in back-to-back years by Pro Football Focus
-Four-year starter, including program record 52 straight games at guard
-Team captain in 2018 and 2019
-Named AP Second-Team All-American in 2018 and 2019

I’ll be honest: going into Shane Lemieux’s film review, I was a bit concerned that I was looking at an interior offensive lineman from a historic spread system like Oregon’s. However, I came away pretty darn impressed by Lemieux because he can play in any type of system. He’s a new-school interior offensive lineman that is nasty, packs a serious punch in his hands, and can move a bit.

Right away, popping on the 2019 Auburn game, I saw violent, powerful hands from Lemieux, allowing him to release cleanly on this quick throw to the outside.

Watch the club here from Lemieux. That’s freakish. Auburn defensive tackle Nick Coe is no slouch himself, especially at 6’5, 300 pounds. Lemieux tosses him like a rag doll. The hands are truly insane when he gets them on you.

That doesn’t stick just to the line of scrimmage either.

If Lemieux is able to climb to you on the second level and gets a clean look at you…look out.

Against Stanford in 2018, Lemieux bullied this Cardinal linebacker, stunning him after climbing to the second level, leading to the pancake. He will struggle with his consistency and hit rate in space, but there are flashes of darn good football in that area for Lemieux.

He showed it again in 2019 against Auburn.

Look at the efficiency climbing to the second level. He zeroes in on his target and doesn’t miss, getting two quick, powerful punches off against Auburn linebacker K.J. Britt, taking him out of the play entirely.

While those three plays above are impressive for Lemieux, I kept getting caught up waiting for the drive and finish in the run game. I know Oregon is a power rushing team, but with Lemieux’s size and strength I thought I’d see it more than once.

Lemieux doesn’t really drive his feet well in the run game when latched on, but when he gets rolling like this, he’ll finish a guy and let him know about it. The key at the next level with his next offensive line coach is to unlock this aspect of his game. If he can consistently start moving guys in the run game, he’ll be a complete guard.

He’s already pretty darn good in pass protection, which shouldn’t be all that surprising coming out of Oregon. The thing that stands out to me the most in pass protection with Lemieux is his incredible ability to pass off stunts and twists with ease. They simply don’t bother him. He knows they’re coming, communicates well, and is always in position to win.

Look at how flawless that pass-off and finish is by Lemieux. There are NFL guards that still struggle mightily with this, and Lemieux does it effortlessly. That comes with tape study and the ability to process quickly after reading initial keys.

Final thoughts on Lemieux: he’s going to be a starter quickly in this league, especially in a pass-first offense. That’s his strength right now, so if a pass-first team is in need of an interior OL, they should grab Lemieux.

My fear is that a team that wants size and strength inside to establish the run is going to try the plug and play approach with Lemieux. That’s a square peg in a round hole. He’ll need time to develop as a run blocker, but he’ll be pretty darn good quickly in a pass-first offense.