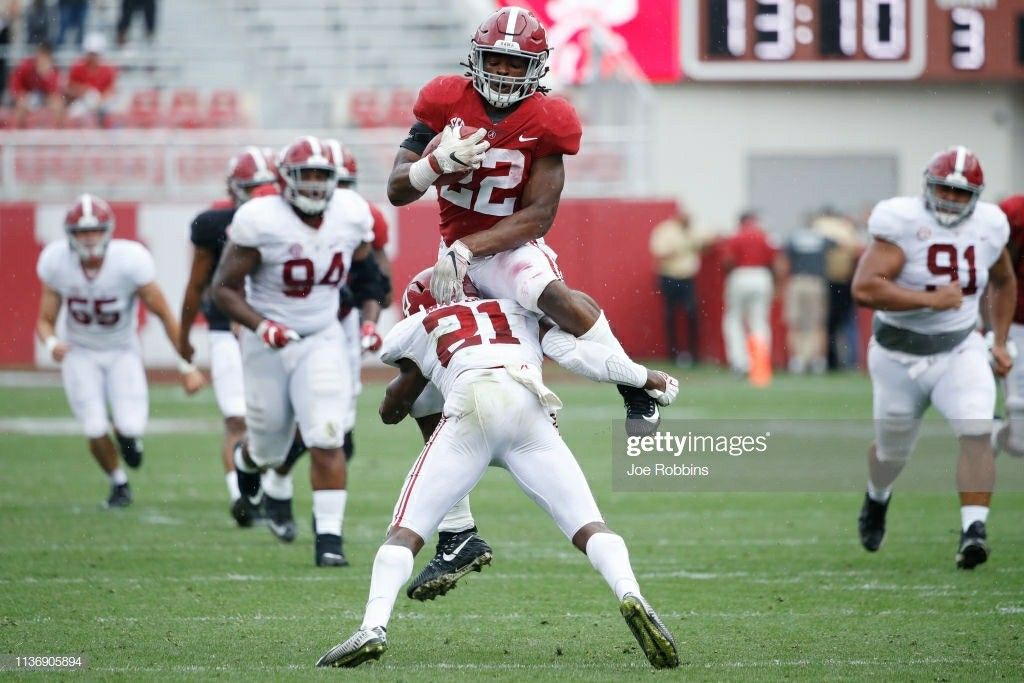 – Stout frame who looks the part
– Desire to be physical, attacks the ball downhill, strong filling the alley in the run game
– Wants to and capable of delivering a big blow against runners, willing to sacrifice his body to make plays
– Has a general “hair on fire type attitude”
– Works best closer to the line of scrimmage but versatile, asked to play in the box, slot, outside vs RBs/TEs and some work as the post safety
– Played in NFL-type scheme, experience in man, zone, matchup coverages

– Aiming point is far too high as a tackler and causes him to miss/fall off far more than he should
– Focuses too much on going for the big hit than the wrap-up, fundamental tackle
– Angles are too shallow in coverage when playing FS and trying to defend vertical concepts
– Went quiet too often, rarely felt like an impact player or game changer, even against lower competition
– INTs weren’t high difficulty plays, splash moments felt hollow
– Appears to be an average athlete and a bit tight-hipped in trying to change directions
– Only one year of starting experience and limited production

Mayden was a highly touted recruit coming out of high school with the ability to go pretty much anywhere he wanted. He chose Bama, and it’s hard to blame him for that, but it took him basically until his senior season to see substantial, starting play time. And that’s probably hurt him when it comes to his NFL chances.

For the positive, he profiles as a typical “box” safety who can fly downhill and hit. He’s certainly got that fearless, a-screw-loose attitude, not quite at a Jonathan Abrams’ level, but Mayden is willing to sacrifice his body to blow a play up. Here he is with a big stick at the end of this run.

Alabama used him as a chess piece defensively and he lined up all over the field. That experience is only going to help him at the next level. The ability to wear multiple hats is key to success in the NFL. Though I think Mayden would struggle in a full-time role as say, a free safety, the fact he’s played there and knows how to think like one is helpful.

But I have to admit his tape simply wasn’t that impressive. Maybe it would come with more time, like I said, he’s basically a one-year starter, but rarely was I wowed with his game. Even finding all four of his INTs weren’t that eye-catching. Two of them came against lowly Western Carolina, one of which was a lame duck the QB threw up into the air. One against Ole Miss was a 4th down heave that fell well short of the mark and the other versus Tennessee came off a drop/bobble by the wide receiver. Credit to Mayden, the dude made the play. But it’s nothing that gets me excited when trying to translate that to the next level.

We profiled Texas’ safety Brandon Jones and noted his issue was aiming too low as a tackler. Mayden is the opposite. Goes too high. Wants to deliver the body blow but it causes him to miss or simply fall off runners. Couple examples. In the second clip, you see a poor angle, a guy going too high, and lacking the fluidity to change directions. Causes him to flail and miss.

His athleticism appears only to be average and compounds the problem by struggling to get depth and taking too shallow of an angle to the football. Doesn’t get depth here and the WR runs down the seam. Mayden is on the right hash.

Or here in the middle of the field. Too shallow of an angle and if the receiver had a chance to make the play, Mayden’s not going to be in position to stop it.

There’s something to be said for a guy who can play the run, that’s still a must in the NFL, but beyond that, his ability to help a team seems limited. Especially if his tackling doesn’t improve. And even if it does, his limited athletic profile hurts his stock.

Good opportunity to turn heads in Mobile with a strong week, scouts were just getting to know him this year since his experience before then was limited, but it’s hard to view him anything more than a fringe player with a draft stock that follows suit. Less athletic version of Terrell Edmunds.