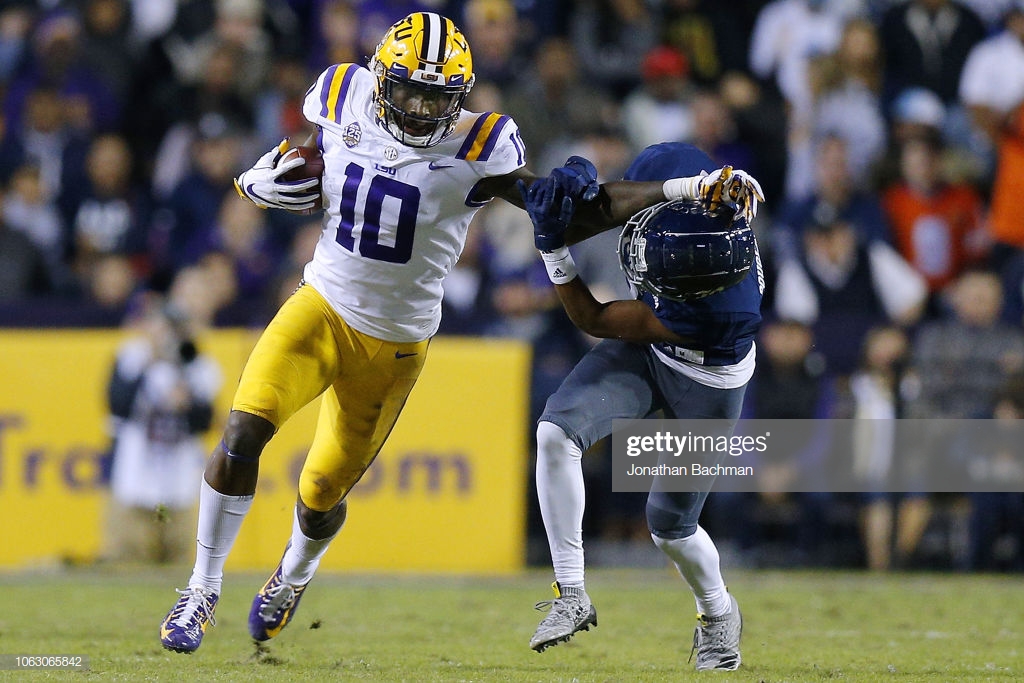 – Large frame with ability to add weight, will be severe mismatch problem for LBs/DBs downfield
– “Above the rim” type player capable of winning contested catches deep downfield, where he made his most impactful plays
– Reliable hands who plucks away from his frame with size to box out smaller defenders (which is pretty much everyone who covers him)
– Fluid, smooth route runner who creates separation at top of route
– Long-strider and less of a build-up runner than you’d expect, accelerates quickly and threat in open field when he has a runway
– Versatile, worked at wide receiver and tight end, and shows a desire to try to block
– Shows plus body control and spatial awareness while in the air
– Good football IQ and works hard to get in QB’s vision in scramble drills and finding grass against zone coverage
– Lots of upside, can be a much better player than he currently is

– Undefined role for the NFL, teams will evaluate him at different positions, WR or TE
– Far too poor of a blocker to be an in-line tight end right now
– Lacks strength and gets overwhelmed at point of attack, struggles with leverage, pad level, and initial steps
– Never asked to line up in a three point stance even when he was used at tight end, always in two-point
– Lacks obvious lateral agility due to size, can outrun players but won’t run around many
– Low level of production and didn’t start, played rotational snaps and often got to play fresh
– Numbers fell off with position switch, simply not a lot of tape to evaluate him properly, and is a tough projection for NFL

On the surface, Sullivan’s profile makes you do a double-take. 6’5, 252, with a projected 40 time in the 4.5’s. For a tight end, what’s not to like? Then you do a little digging and the light comes on. He’s a wide receiver who has played a little bit of tight end.

LSU moved him to be a receiver/tight end hybrid for his senior season. Which is disappointing because it was a year where Joe Burrow exploded. He threw 55 touchdowns, not one of which went Sullivan’s way. In fact, as the 2019 numbers show (12 catches, 130 yards, zero scores), his production was flat-out bad for how potent the Tigers’ offense was.

But Sullivan makes enough plays to make you want to see more. He can go up and get the ball with the best of them, catching this Hail Mary in 2018.

Yeah, that was against *just* SE Louisiana, but when you’re leaping through a sea of hands like that, the opponent doesn’t much matter. That’s just an impressive play.

Here’s a contested touchdown against Rice two years ago.

Though he may suffer the occasional drop, that’s natural for a guy who barely saw the ball, his hands are impressive and he effortlessly plucks the ball away from his frame.

Still, he’s a shooting guard who needs to play more like a power forward. LSU may have wanted to give him a look as a tight end but he’s far from a finished product there. He didn’t line up with his hand in the ground and simply can’t be trusted to block.

I would probably make him that big-bodied, deep threat receiver at the next level as opposed to trying to make him work at tight end. Not going to utilize his skillset and it’s not worth the time and energy teaching him the nuances of the position as opposed to working with his natural strengths (hands, size, jump ball ability). At his ceiling, offering up a Darren Waller, who began his career as a WR before transitioning inside, is a solid comparison. Waller, like Sullivan, didn’t have much production coming out due to playing in Georgia Tech’s triple option system.

His floor though is very low and Sullivan is a tough projection for Sundays. Can’t make a giant investment in him because of that bust potential. Could end up being the next Ramses Barden.