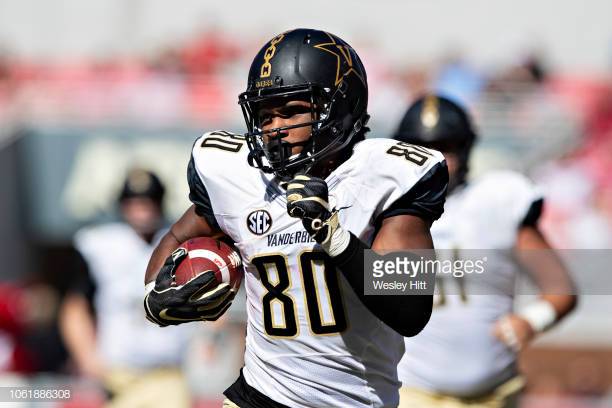 – Solid frame and seemed to add weight for senior season
– Fluid athlete who runs crisp routes and shows above average burst at the top of his route
– Gets up to speed quickly and isn’t a “build-up” type runner
– Strong hands and consistently catches away from his body, “quiet” catcher capable of plucking and attacking the football out in front
– Finds and adjusts to the ball well
– Capable of making plays in traffic and willing to go over the middle, most plays came between the numbers
– Shows power after the catch and capable of churning out YAC, won’t break a lot of tackles but able to push the pile forward
– Asked to help in every aspect, experience lining up in three point stance, used as a run blocker and pass protector
– Shows effort and desire as a blocker and capable of overpowering DBs in space, runs his feet and works hard through the whistle
– Excellent starting experience

– Struggles to sustain contact as a blocker, falls off too easily
– Works hard in pass pro but struggles to keep his feet moving laterally and loses block almost immediately
– Hand placement needs work, punch needs to be lower to stick to block
– Can get overpowered on base blocks against defensive linemen
– Good but not great athlete who won’t make many miss or run away from defenders in open field
– Production fell off dramatically during senior season, only one year of impressive numbers

Pinkney is the first tight end I’ve checked out this year and is regarded as one of the better in this class. He offers a balanced game not commonly seen with college tight ends though I wonder if he’s great in any one area.

It’s fair to say he’s a better receiver than blocker. Which is manageable. This isn’t 1992. His best asset are his hands. Pinkney attacks the football, catches away from his body, and does a tremendous job of finding the football and adjusting at the catch point. By far, my favorite play of his was this backshoulder grab against Notre Dame right before the half.

Dude just has a solid pair of hands and makes most of his plays over the middle of the field.

Though there are issues with his blocking, it’s not for a lack of trying. He wants to be a successful run blocker and it shows out in space against smaller DBs. His effort and strain are evident and I respect that.

Unlike a lot of tight ends, Pinkney played with his hand in the ground quite a bit, was part of the run scheme, and even did a little pass protection, though he was rarely successful there. Still, he’s experienced in doing those things and that will ease a difficult transition tight ends face to the NFL, in part because those roles are typically so foreign in college.

But there’s no denying. He’s gotta become a better blocker. Hard for him to reach defenders and wash them down.

And he slips off blocks far too often.

Pinkney is a good prospect. Not a great one, not a Travis Kelce type, but a good athlete, willing blocker who can and should improve, and there is serious starter potential. It’ll just take a little bit of time, patience, and quality coaching.