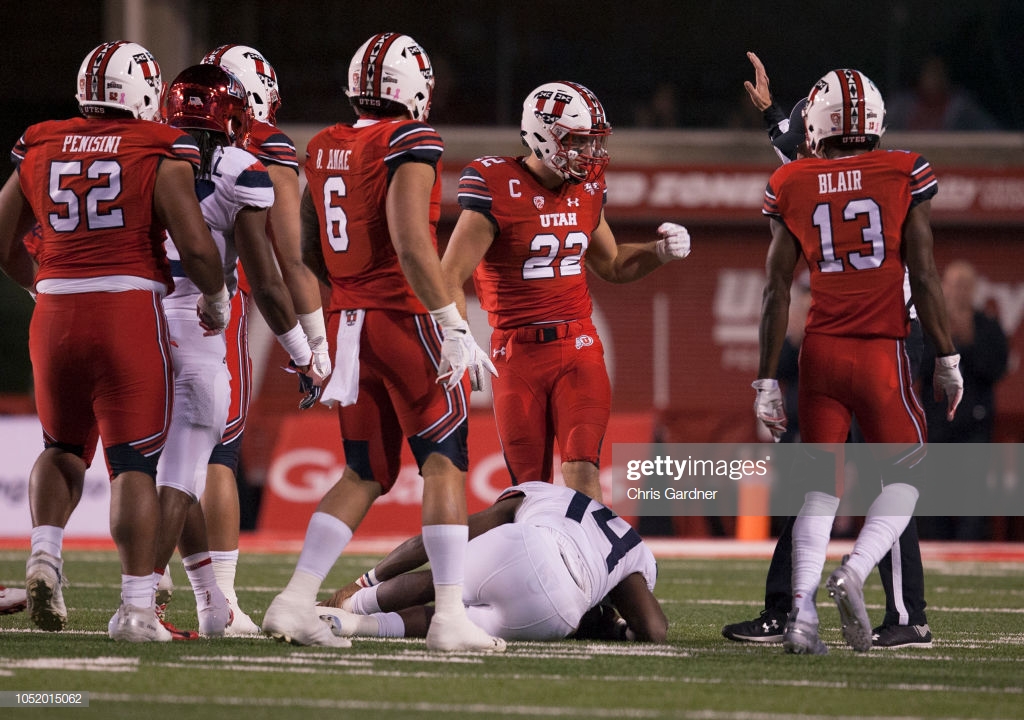 Consensus All –American Bradlee Anae (pronounced uh-ny) has been a very productive player who tied the school record for career sacks and is forth all time at Utah in tackles for a loss. He played primarily on the right side of the defense with experience with his hand in the dirt and in a 2 point stance.

Against the pass, he has a lot of tools. He shows good burst at the snap especially when he can pin his ears back on passing downs.  He relies heavily on speed rushes up the outside and will vary his hand usage to include chops, swipes and rips and looks like he gave collegiate OT’s issues causing them to hold often even if it wasn’t called. He doesn’t have a go to move but there are a lot of moves at his disposal. Spin, stab, push/pull and dip/rip were some of his arsenal. He has solid bend for his size and can flatten to the QB when he gets the edge. The first two and half games I watched he rarely rushed to the inside of the tackle only attempting it 3 times. He started to vary his pass rush more and started getting wins to the inside on spins, club/swims and stutter chops. He showed good quickness to come off the hip of the DT as the looper on stunts and twists.

Despite his production he seems to lack a pass rush plan.  He seems to choose a pass rush pre snap rather than reacting to the tackle during the play. He needs to improve his counter when his first move doesn’t work to get off the blocker as well as his variance from inside to outside. There was only one rush in five games that was a power rush which was surprising. He wasn’t asked to do it often but he did drop into coverage in the middle zone and the curl/flat areas on the outside.

At USC, he is in a 2 point stance on the right and displays his burst up field before he’ll chop the outside hand of the LT and bend around the corner for the sack.

At Arizona, he wins with a spin move to the outside. Shows speed up the arc before the spin leaving the LT frozen.

At Arizona, he starts his rush up the arc and shows play strength to shove the LT up field so he can cut inside and get in for the sack.

Against the run, he is an assignment sound, strong defender.  He will do his job so someone else can make the play. On runs in his direction he is strong enough to set the edge to force plays inside and can shed one on one and make plays. He is a good tackler near the line of scrimmage. On plays away from him, he doesn’t over pursue and will slide with the play to cut down the backside cut lanes. He played the run first, not blindly rushing up the field, which makes his sack production pretty impressive. His pursuit across and downfield improved in his senior season but there is still room to improve his motor in situations other than chasing the QB.  His tackling technique past the line of scrimmage was a bit unusual for a 265 pound player as he would cut down runners line a defensive back limiting his opportunities to force turnovers.

Vs Washington, he is the Edge on the right side on in a 4 point stance. He’ll take on the slide block of the TE and shed to make the tackle at the LOS.

At USC, here is lined up as 3 tech and will show his quickness slipping behind the pulling guard beating the reach block of the LT to get into the backfield to make the TFL.

Vs Washington State, here is one of his cut tackles coming off the block to work inside and take out the RB’s legs. I saw him do this at least 3 times. Its effective but I’d like to see the edge guys swiping at the ball while making the tackle.

There’s a lot to like with Anae as an edge defender. He is assignment sound and he has the size and strength to set the edge and make plays in the running game.  He has good burst and the ability to get to the quarterback in different ways. He is not a finished product however.  He needs to improve on his pass rush plan and be more reactionary when rushing the passer including being able to counter when the first move doesn’t work.  I’d like to see more focus on forcing turnovers and continuous effort to the whistle. If he can continue to improve like he did from junior year to senior year a little fine tuning will go a long way and you’ll end up with an effective player.