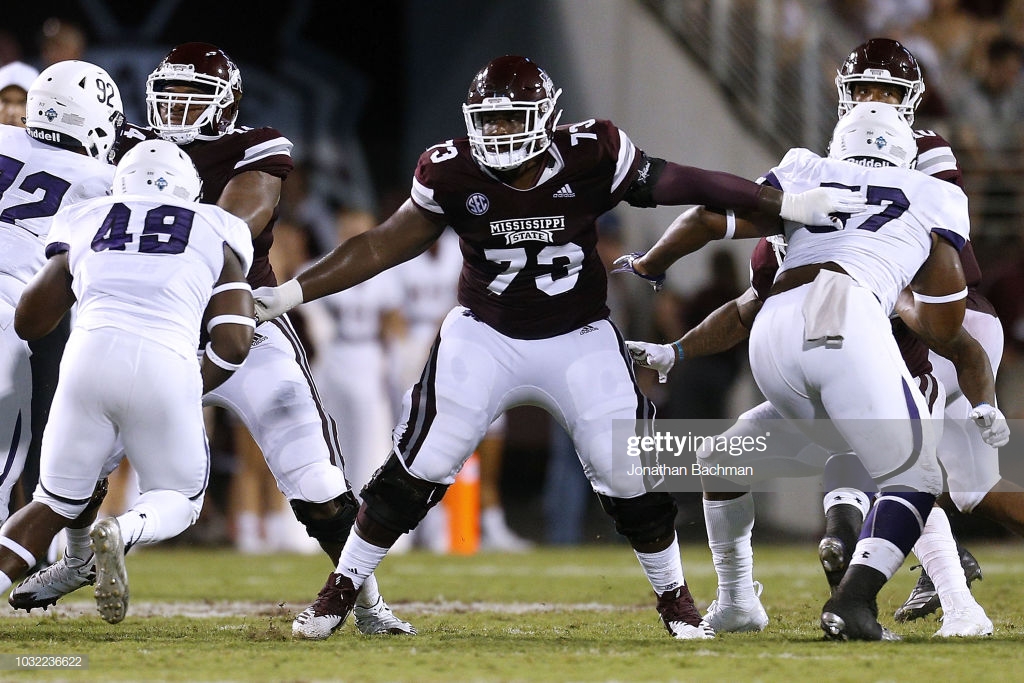 Williams was a leader on the field and has a ton of experience as a starter in the SEC. He played left guard for two years while Elgton Jenkins (2018 2nd round pick by Green Bay) played center. He took over the spot in the middle of the Mississippi State offensive line in his senior season.  He has good size with a thick lower half ideal to playing on the inside.

On power runs, he shows good quickness at the snap and is most effective on down blocks and one on one where he can turn and wall off defenders using positioning and play strength. He’s not generally a people mover but he’ll get his share of pancakes. I like his competitiveness and he has a bit of nastiness in him that comes out occasionally. He wasn’t the perfect blocker but had good moments against good talent.  When moving laterally, like when he is pulling, he’s displays adequate speed lumbering around the edge but if he gets outside his speed improved downfield.

At Alabama, playing left guard, here is a rep where his able to open the hole by turning the defender to the outside.

Vs Iowa, here is an example of him pulling from the left guard position. Though not fleet of foot he gets around the edge to scoop back and block the defender.

Vs Mississippi, a rep against the quickness of Benito Jones. He gets him off balance and is able to take him to the ground.

On inside Zone runs, he solid as the post on combo blocks allowing his teammate to climb to the next level. When he climbs to the second level his positioning and balance is good however he needs to improve his hand usage as he “catches” the linebacker with his hands wide allowing the defender into his chest. He lacks the lateral quickness to be effective on reach blocks on outside Zone runs. The Bulldogs didn’t run outside Zone often and it was clearly not his strength.

Vs Mississippi, he will chip on the 3 tech to the right before climbing to the second level and sealing the linebacker on a touchdown run.

In Pass Pro, in the games watched it was exclusively shotgun formations. He shows good quickness and he sets up with good balance and pad level and can handle most one on one situations.  Against quick DT’s shooting the A gaps he was showed the ability to recover and push them to the outside. He has a good anchor against power rushes showing good core strength to absorb the rusher. He has solid awareness when handling stunts and twists. His hand placement is inconsistent and needs to improve moving laterally with defenders to stay in front of him rather hand twisting his upper half to stay with defenders. He chases defenders moving through his area turning himself sideways instead of staying square to the LOS.

At Alabama, here is a rep versus Quinnen Williams were he’s able to stalemate and keep the DL in front of him.

At Tennessee he is playing center and will slide to the left to take the place of the left guard and has a good rep.

You know when you drive on the highway and lose concentration for a second and your vehicle fades to the side and hits the rumble strips? That’s what comes to mind watching Williams. There are plays where he seems to lose concentration for just a second and he gets hit and gets jolted back to awareness for the rest of the series. He shows some really good reps and others leave you wanting.  He’ll need to be coached up to improve his hand usage and footwork and needs to be in power running scheme.  He should be a depth IOL player initially with a chance to start down the road.