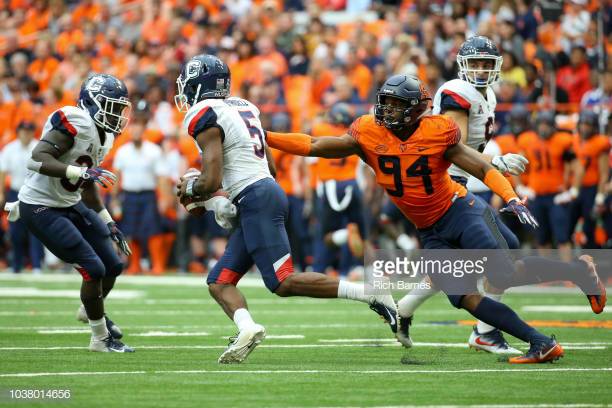 After a promising junior year when he had 17 tackles for loss and 10 sacks Alton Robinson’s production took a down turn in 2019. The long limbed edge rusher who played on the left side of the Syracuse defense saw his tackles go up but his pass rushing numbers go down.

He shows good mental processing to identify run versus pass while line up from the 5 technique out to the 9. Against the pass, he has very good first step and can get up field quickly to put stress on the blocker. He uses his hands well and shows good positioning on power rushes getting his hands into the chest of the defender or to use chops and swipes to move the hands of the tackle. He uses a speed to bull, push/pull and long arm with good leverage to push OT’s back in the pocket. He showed quickness to stutter or nod to the inside with a swim move to the outside and club/swim to the inside.  He wasn’t used in coverage but was occasionally used as a spy on the QB. His bend and ankle flexion around the edge was adequate and looks a bit stiff up top. I felt he needs to improve his counters when the first move doesn’t work when using a speed rush to the outside.

At Pittsburgh he chops the outside and dips his shoulder to get under the tackle running through his hold to get the sack fumble.

Vs Notre Dame, he uses and head and shoulder fake to the inside while swiping the outside hand.

Vs Wake Forest and this time it’s a club to the inside and uses his length to swipe and the ball and gets the sack.

At Louisville, he uses good hand placement with two hands high into the chest, swipes the inside hand to get him off balance and acceleration to force the near interception.

Against the run, he reads the mesh well, will take on pullers to try and clog holes and was solid at setting the edge using his hands well and squaring up the blocker. On the backside, he’s assignment sound and will slide attempting to prevent the cut back lane. He’s a solid tackler and displayed good quickness and mental processing to take down or string out the jet/fly runs.

At Pittsburgh, good recognition of the jet sweep, quickness to get up field before he gets outside and he forces the fumble.

He gets too much depth when setting the edge allowing a running lane to inside and doesn’t have the lower body strength to hold his ground consistently. He doesn’t disengage quickly enough vs blockers including TE’s. His lateral agility is adequate and there were plays on the backside I thought he should make but didn’t take good angles or have the speed going toward the sidelines. His change of direction and pursuit were adequate, more of a jog when chasing the play.

Vs Louisville, here he is from the backside where I thought he should make the play. He takes a bad angle and doesn’t have the speed to get there.

Robinson has some good tools to win as a pass rusher with power and quickness, an assortment of moves and smartly goes after the ball when he gets to the QB.  His run defense has room to improve but I’m not sure how much quicker they can make him going side to side. Teams love pass rushers especially those who can get off the ball quickly when you let him pin his ears back. He could be used as a sub package pass rusher initially before eventually becoming a starter.