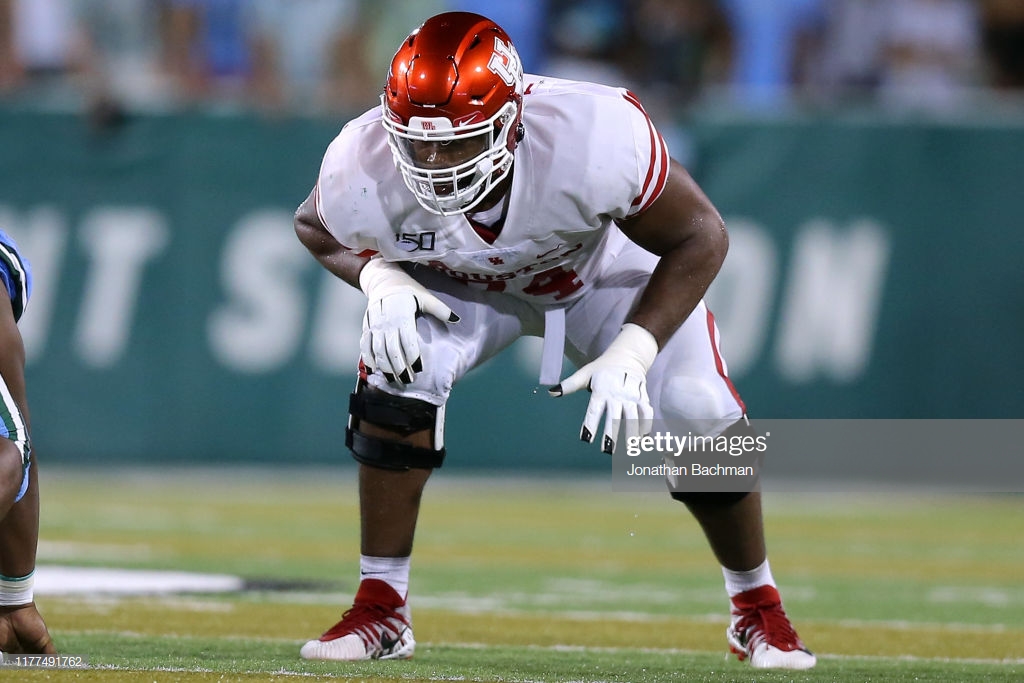 When looking at tackles, athleticism is something that either stands out in a very good way or an extremely bad way, and you can tell right off the bat which is the case. They are each key to really cementing a tackle’s overall ceiling. Last year, you saw now Eagles Tackle Andre Dillard have a meteoric rise due to his functional athleticism and really what he was able to do as a whole there with his tools.

This year, Houston Tackle Josh Jones may very well be that guy to rise up boards in the process due to phenomenal athleticism. Jones, who is a four-year starter at Left Tackle for the Cougars, already holds a Senior Bowl invite, and with a good week in Mobile and a solid testing day at the combine, the big man should see his draft stock rise considerably, possibly even into the bottom end of the first-round if everything works out.

The thing that could stop him? Some technical issues that clearly are holding him back from being an elite level player, although, with a good coach that can develop some of those shortcomings, Jones certainly can reach that ceiling that he wants to reach.

That mauler mentality is firmly implanted in the mind of Jones as he makes some awesome pancakes on every game of his that I watched. His leg drive and strength, specifically in his lower body, is really fantastic. It gets him rewarded with a good anchor and the ability to become a people-mover and open up holes in the run game. On this rep, you see him do a great job of staying low with his pads and driving his hands through the defensive tackles chest and just drive him back into the ground. Explosive, impressive technical job to achieve this result.

Man, you can see the athleticism here as he reaches to the 3-technique here on the defensive line. Check out how well he moves horizontally down the line to not only get a head up on this defensive lineman but to deliver a sharp jab right the center of his chest and then absolutely drive him out of his gap to open up a hole for the running back to cut up into. These are the benefits of having great athleticism in the trenches.

Football IQ, however, especially in pass protection, is just a huge key for a lot of these guys. Jones is experienced and so it is not a shock that he has experience passing off stunts and really dominating these blitzes. They will not fool him upfront as he does a great job of reading the stunt here and passing it with a powerful punch and taking the defender off his pass rush track. It’s hard to say you could get that much better of rep since Jones allows his quarterback to step up in the pocket.

Here is where the issues start to come in for Jones. He sees that there is a free blitzer, yes, but the technical aggressiveness to lunge forward when this is a standard jump set dooms him from the start. He is lucky that the defender did not come back inside and swim over him since he left his inside wide open by lunging forward. The strike is off time with his kick-slide as well and he gets beat to the outside. Not a great rep at all for him.

Still, when he picks up on those blitzers from the second level, whether that be the nickel corner or linebacker, he loves to show off the fact that pass pro is not passive and throw people right off the screen. He pancakes this nickel corner that comes and absolutely ends any thought of a blitz getting home here. Jones is an impressive player.

Games Watched: vs Washington State, at Oklahoma, vs Cincinnati, at Tulane, vs SMU