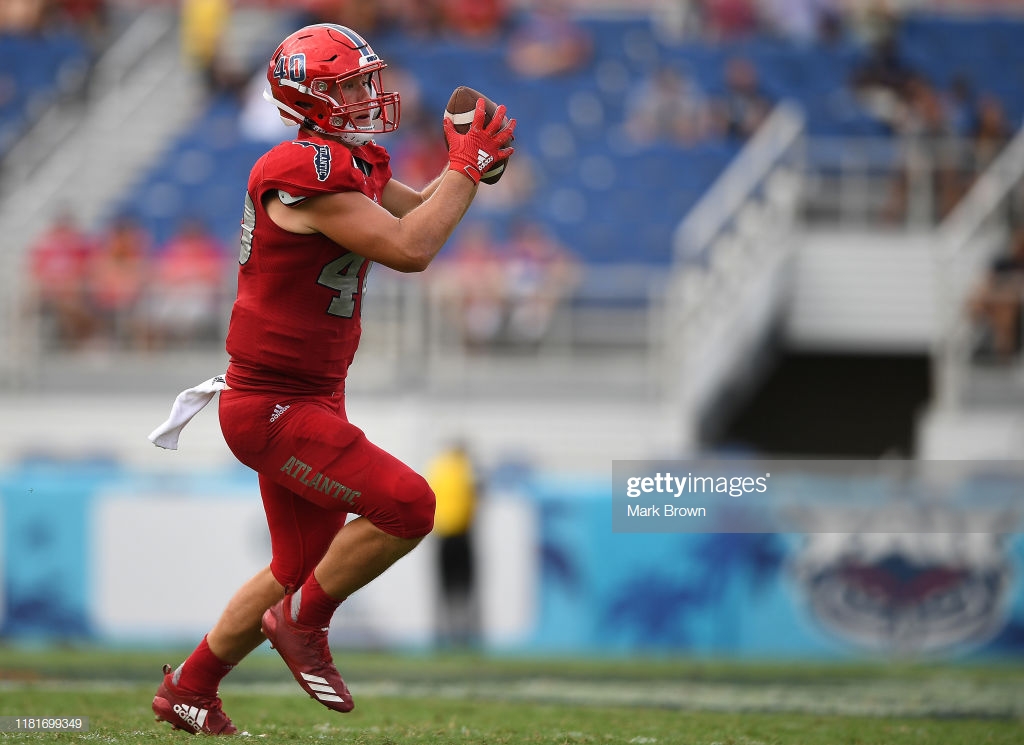 Harrison Bryant is like a Rorschach test for the tight end position. What you see in him probably says more about what you value in the position than it does his actual skill set. Some may see a big slot receiver, others may see a flex tight end, and yet others may see a player that lacks the skills to fill either role.

The senior pass catcher is ‘undersized’ at just under 6 feet 5 inches due to a narrow frame and shorter arms (31.5 inches). At 242 pounds he looks more like a receiver than an in-line tight end.

There isn’t really a weak area in Bryant’s game from a technique standpoint. He’s a capable receiver who can threaten the seam, make contested catches, and be a reliable target as an underneath receiver against zone defense. His best attribute is ability to get off the line of scrimmage cleanly against press coverage. This allows him to gain a step on defenders despite an incomplete set of physical skills.

The Georgia native is a capable blocker despite his physical traits. He shows good technique, hustle and toughness as a run blocker. His quick feet and hips allow him to be effective at walling of defenders to create a hole, or to move in space and lead block. Despite a narrower frame (especially through the waits, limiting lower body mass), Bryant has maximized what he has and punches above his weight in the running game. He even shows the ability to kick slide and sink his hips in pass protection.

While he’s more suited to take on linebacker rather than traditional defensive ends, Bryant shows the strength to take on defenders bigger than him and hold his own.

Bryant also generates highlight-level catches with a very good set of hands and the ability to track the ball while maintaining body control.

The real issue with Bryant is that he does not have great lateral agility. His ability to create separation at the top of his routes and to make sharp cuts is limited. In fact his overall athletic profile when viewed as a whole is nothing exceptional. He does make explosive plays at a high clip, but they were generated by scheme and effort, not necessarily with athleticism.

No matter what you see in Harrison Bryant it’s clear that he is a good football player from a fundamental standpoint He’s worked to make himself a complete tight end who can block, pass protect and create separation despite his physical limitation. His draft stock will likely depend on a good showing at the NFL Combine, specifically in lateral agility drills. If a team values sound positional fundamentals and a player who is simply good at football, Bryant will be a hot commodity. That being said, with short arms, a ‘tweener’ build and limited lateral agility, it’s hard to project Byrant any higher than a Day 3 pick.