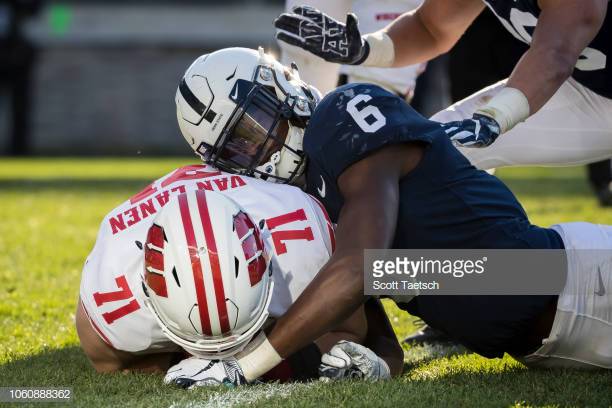 Cam Brown certainly looks like the modern NFL linebacker, with a long, rangy build that more resembles a wide receiver than a linebacker. The senior from Penn State stands at 6-5 and a half, with a massive 34 in wingspan and long, lean levers that help him cover ground in a hurry.

Despite his lean frame, Brown is a quality run defender who punches above his weight and shows a knack for attacking the proper shoulder of the lineman in his run fits and getting to the ball carrier. He’s especially effective on run blitzes where he shows an ability to knife into the backfield and disrupt plays.

Brown does this from all over the field; lining up in the slot, in the box, and on the end of the line of scrimmage. The Maryland native has spent quite a bit of time in the slot as a linebacker. When he’s confident in his assignment and he has a clean read, he’s effective in attacking bubble screens and underneath routes.

The problem is that Brown is really only effective in a linear fashion. When he’s forced to change direction by either a misread or by an offensive player breaking contain, he struggles to be effective. This is particularly pronounced when Brown is in space.

The senior linebacker is good in coverage, but not exceptional. His problems are not all physical though. He does not have natural coverage instincts and pulls himself out of position with a lot of false steps. He doesn’t show anticipation to jump routes or to force incompletions. He typically waits until the ball is completed and then makes his move. It’s more concerning that he’s a senior and still struggles with mental errors. It’s also surprising that Brown is not a good man coverage defender despite his length and movement skills, even though he looks like a tight end eraser.

Ultimately Cam Brown’s best chance to play in the NFL will likely be as a weak side linebacker who can make plays attacking in underneath, zone coverage. While it’s a limited role, he shows plus run defending abilities and provides flexibility to maintain size in sub-packages. At the very least he’s an excellent special team’s candidate.