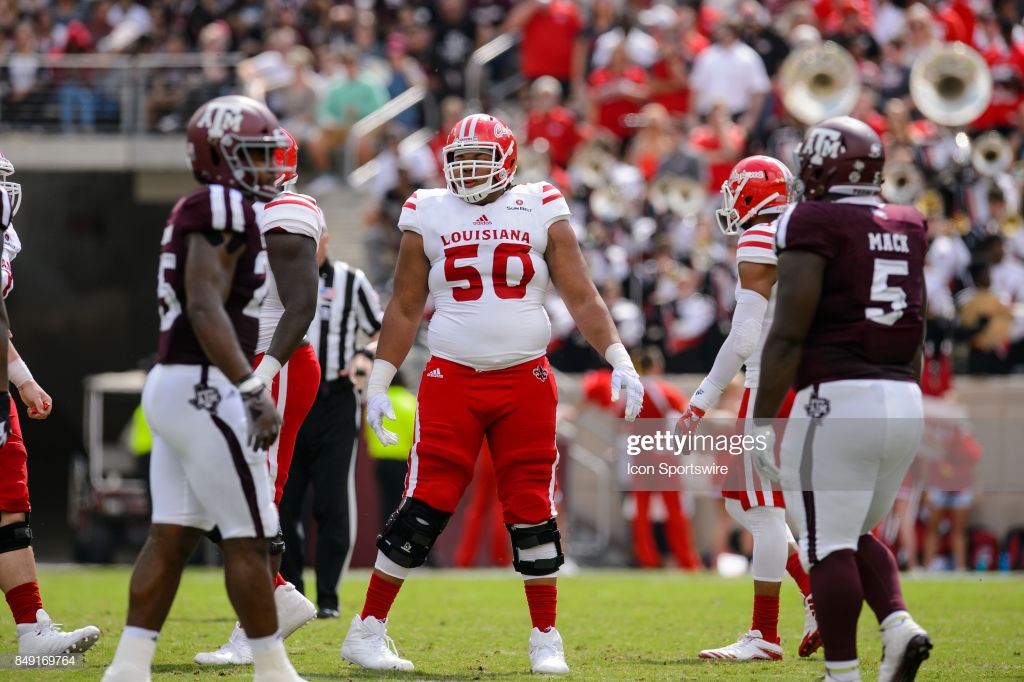 A four year starter for the Ragin Cajun’s offense with experience at guard and tackle.  He spent the last two seasons playing right tackle before a groin injury shortened his 2019 campaign. He has shown great development over the last couple years and has transformed into an impressive blocker in both Power and Zone run schemes.

As a pass blocker, he shows good timing at the snap and good base getting into his set. He shows good mobility and uses his hands well to punch and keep defenders off of his body. He has the core strength and power to anchor versus power rushers. Against speed rusher he has solid lateral agility to slide and mirror on the edge. He displays solid awareness on stunts and twist and good awareness to pick up late blitzers.

Vs Appalachian State, the kick step is shallow but his base, hand fighting and lateral slide is pretty good to mirror the rusher.

His kick slide is little shallow and would benefit by getting a little more depth to cut off the angle on the outside. He needs to be more consistent getting into his set to not be on his heels and limit his balance. Against bull rushes, I’d like to see him reset his feet a little quicker to limit the depth he allows. Against speed rushers he needs to be patient with his hands to not reach and over extend.

Vs Tulane, he’ll take on a speed to bull and get pushed back into the pocket. His first kick step is up and down not back putting him on his heels.

As a run blocker, his improvement over the last two years was promising. He plays with controlled aggressiveness and good agility; good pad level and leg drive to move defenders on down, drive and double team blocks and has very good play strength and good hand placement to get an extra push. He has the mobility to pull right or left from the right tackle position to get in front on runs outside or lead through the hole and has good awareness to pick up the most dangerous defender. On combo blocks he like to use a gallop step into the defensive lineman before showing good timing to release to the second level and wall off defenders.

Vs Alabama, he’s going to use a gallop step into the DT and climb to pick up LB at the second level to clear a path.

Vs Tulane, on this run to the right he’ll work to the outside of the DE and use his inside arm to hold off the defender while on the move.

At Georgia Southern, he shows his upper body strength to twist and plant the defensive lineman.

At Georgia Southern, this isn’t the cleanest block but it showcases his mobility pulling from the right tackle position to lead through the hole

At Georgia Southern, his initial block is on the DL but displays awareness to pick up the linebacker shooting the gap to save the run.

May not possess the quickness to reach block but has more than enough strength to drive defenders to create the cut back lane. His timing on cut blocks could improve to not attempt too early and more consistent pad level as a whole. He can improve his patience with his hands on the second level to not over extend himself toward defenders.

As I stated his improvement just over the last two seasons has been impressive and he is not a finished product.  He has improved his physical stature, strength, his balance and use of hands to name a few.  He has flexibility along the line where you could use him as either a right tackle or inside at guard. I like his mobility to pull left from the right tackle position, his play strength, mental processing and aggressiveness.  Any negatives that I mentioned (patience with hands, kick step, resetting the anchor) can be improved and I think he will get better. He’s a day two guy for me. It just depends on how early he goes.