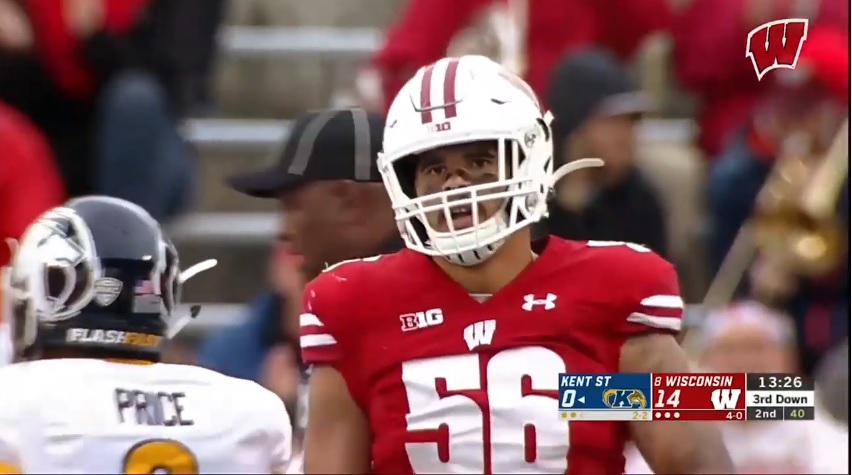 You don’t normally find an outside linebacker whose best attribute is dropping into coverage but that’s exactly what Wisconsin’s Zack Baun is. Baun bucks the trend of athletes moving down (safety to linebacker, linebacker to edge defender) by being a 3-4 outside linebacker who will be best suited to playing off-ball linebacker in the NFL. Baun is a silky smooth operator as a former dual threat quarterback who can move well in just about any direction.

He’s not a man coverage style player but his ability to turn and run along with a quick first step and good anticipation make him an ideal coverage defender in space. He does not bite easily on fakes and does not pull himself out of position with wasted steps while reading his initial keys. When he does get his hands on the ball, he can make things happen.

Baun is a fifth-year senior (missed a season due to injury) who plays like a savvy veteran and does not make many mental mistakes.

Baun’s biggest weakness is his lack of overall length and strength. As an edge defender he simply isn’t strong enough to fight through contact to get to the quarterback on a consistent basis. He can win with speed and has a depth of pass rushing moves, but his weight (240) and his arm length (sub 33 inches) are also huge red flags as a full time pass rusher at the next level.

Baun himself knows this and declared himself an off-ball linebacker at the senior bowl. Yet his lack of ability to punch above his weight shows up in the run game as well, not just as a pass rusher. He does a very good job shedding blocks and using his hands, but when he’s forced to engage with a bigger, physical blocker he struggles to engage, shed and attack. Overall his run defense abilities are simply adequate, regardless of what position he ends up in at the next level.

There is a significant amount of projection when it comes to Zack Baun at the next level. How quickly will it take him to learn to play off-ball linebacker at the next level? Can he assimilate to his new position quickly? Or will it take him time to learn the position? Despite that Baun has the movement skills, intelligence and tenacity are all there to make a high-quality coverage linebacker. Combined with his pass rushing abilities and he has the profile of a Swiss-army knife type defender who can do a little bit of everything for a creative defensive coordinator. In the right system he could be a gem that great teams are built upon.

Games Watched: at Penn State (2018), vs Michigan State, at Illinois