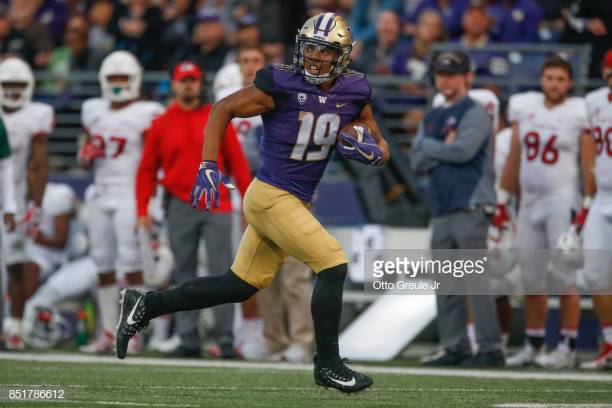 Washington tight end Hunter Bryant is pretty much everything you would want from a receiving tight end. He has a ton of athleticism that makes him a mismatch down the field and he also is a major threat when it comes to accumulating yards after the catch. He really came into his own last season, recording over 800 receiving yards and three touchdowns, earning a All-Pac-12 first team selection.

Bryant’s trump card has to be his athleticism. He is just such a smooth athlete in the open field, with his burst and acceleration standing out as his two top traits. Watch how quickly the Washington tight end is able to get to his second gear on the play below. With his speed and fluid movement, Bryant is going to be tough to keep up with over the middle of the field as linebackers will surely be no match for him while safeties and slot corners may also be too slow to keep up.

Another example showing the mismatch that Bryant will bring over the field. He is lined up next to the formation but without his hand in the dirt. This allows him to get a clean and uncontested release. Watch when he breaks his route, he leaves the trailing defensive back in the dust as his athleticism is hard to match. Bryant also makes a very difficult catch on the play below. This is a guy who is going to be problematic for opposing defenses at the next level.

Bryant really puts the receiving in the phrase ‘receiving tight end.’ He moves really well in the open field and he is an above average route runner for the position. Watch how he fools the opposing defensive back with a quick breakdown to get the separation he needs down the right sideline. His wiggle presents a clear throwing window and gets the opposing defensive back to trip over his own feet.

Another area where Bryant excels is his ability to track the football in mid air. He will bring excellent concentration and ball skills to the tight end position as he is one of the top receiving tight ends in this year’s class. Watch on the play below as he tracks the football in the air and is able to maneuver himself in position for the catch. He has really solid hands for the position which is a plus. If a tight end is supposed to be a quarterback’s best friend then Bryant will surely build a relationship with his new quarterback quickly due to his reliable hands.

Bryant’s receiving ability speaks for itself when watching his film. It is an undeniable aspect of his game but the one area in which he shows consistent struggling is in the blocking department. The Washington tight end comes in at just 6’3, slightly undersized for a tight end and it shows when he is tasked with blocking. On more than a few occasions he will get bodied or overpowered when lined up near the formation.

There are also a few occasions where Bryant has a mental lapse when tasked with blocking, specifically when he is asked to pull across the formation. The Washington tight end is not the sole reason why the below play gets stopped in the backfield but he fails to reach his man and it allows the play to be stopped before it has a chance to begin.

The bottom line when it comes to the very talented tight end is that Bryant is already well matured as a receiver but he is going to need some development and work when it comes to his blocking ability. He is going to be a huge threat down the field on passing downs but I am not sure if he is ready to be every down contributor yet due to the glaring weakness that is his size and blocking ability. Should he clean up this area, he will have a ton of upside to work with.

Games Watched: vs Oregon, vs Arizona, vs Utah