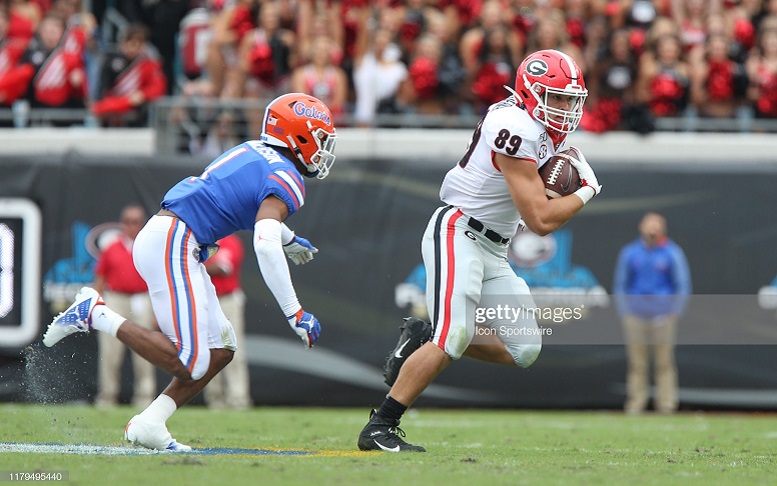 One of the first things that stuck out to me watching Woerner’s college tape is that he’s already become quite a good and effective blocker out in space and most definitely on the perimeter. His college career tape is loaded with blocks such as these two below.

Woerner also has some nice highlights in his tape of him blocking on the move and inside the box. Below are three of those instances.

Woerner unfortunately wasn’t thrown to much during his college career. Even so, the former wide receiver showed soft hands throughout his college career at Georgia. Not only did Woerner catch almost every pass thrown his way in college that was on target, he also caught quite a few bad throws as well. Below are a few of his bad throw catches and his lone touchdown reception.

Woerner has a nice degree of athleticism to him as he demonstrated early in his college career on this catch and run.

Below is a video of all 34 receptions that Woerner had during his college career at Georgia and in the chronological order that they happened in.

As far his blocking goes, Woerner might very well have been the best SEC tight end last season when it comes to that part of the game. He’s very accomplished as a perimeter blocker and improved quite a bit as a run blocker on the end-of-the-line of scrimmage throughout his college career. Keep in mind that Woerner played a lot of wide receiver in high school so blocking big EDGE defenders and linebackers was new to him in college. He needs to get a little stronger and will always battle the fact that his arms are about an inch and half shorter than ideal for his size and position he plays.

As a route running tight end, Woerner obviously will need some coaching and improvement in that area and once again that’s likely because he just wasn’t asked to do much in the Georgia passing game. He still moves fairly fluid, however, and thus it will be interesting to see how he does in the timed drills at this year’s scouting combine. I bet he tests well.

Character-wise, Woerner is as clean as they come and he should do extremely well in his team and media interviews while in Indianapolis for the scouting combine. He’s just a good old southern kid from a large family that has some college football bloodline in it.

Why aren’t we hearing more about Woerner at this point of the draft process? That’s hard to say and especially with him sticking out in a positive way at the NFLPA Bowl All-Star game. I suspect we’ll hear more about Woerner after the scouting combine.

While Woerner isn’t likely to be the next George Kittle, he deserves a lot more buzz than what he’s gotten up until this point. He’s probably one of the best kept tight end secrets in this year’s tight end draft class at the time of this post. The fact that he wasn’t used much in the passing game at Georgia probably has a lot to do with that. I look forward to watching him compete at the scouting combine. The Steelers are sure to be interested in him.

Games Watched: Way too many. (2019) at Vanderbilt, vs Notre Dame, at Georgia Tech, vs LSU