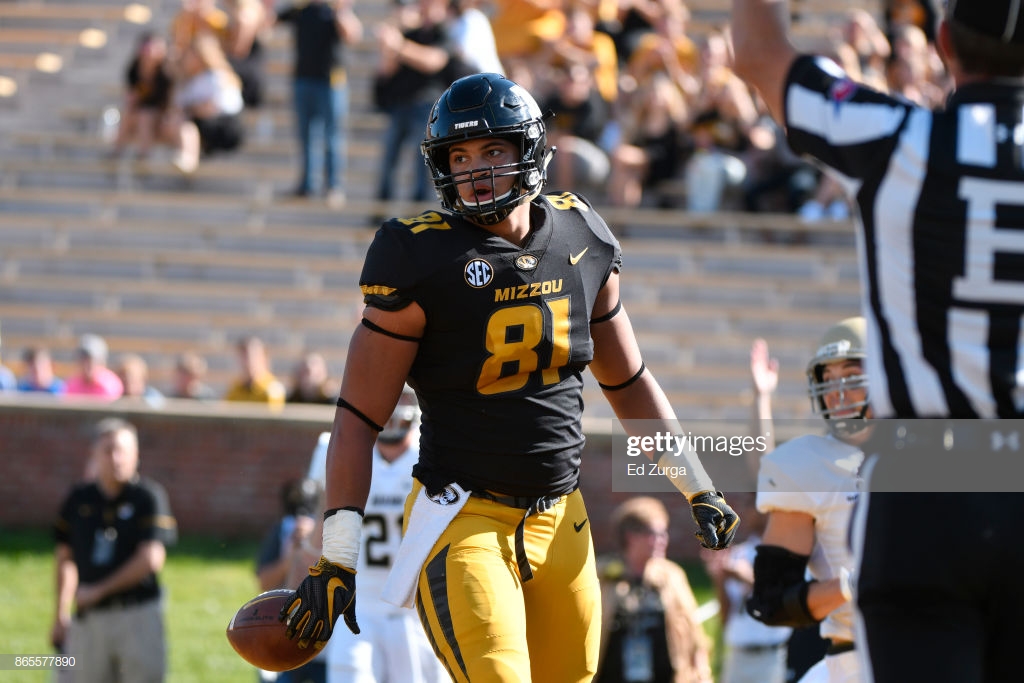 -Tracks the football well when working vertically, shows good body control to adjust to flight
-Soft hands that envelop the football
-Huge catch radius and thrives when asked to play above the rim
-Positionally flexible, asked to wear a lot of hats in Mizzou offense; comfortable lining up all over the field
-Vertical threat that uses his body well to box out and win at catch point
-Flashes physicality with the ball in his hands, rarely goes down on first contact

-Lacks strength and drive as a blocker; gets overpowered in the run game too often for his size
-Route tree is pretty bland; a lot of seam leaks, crosses and quick outs, not much more there
-Not a sudden athlete, clunky mover on film that needs a runway to get going
-Prefers to be a stalemate blocker when in line, which can lead to him getting rolled up on, or stuck in the hole
-Pad level is very rough as a blocker; struggles to sink into hips and drive; will slide off strikes far too easily
-Awareness as a blocker is well below standard; uncomfortable and unsure of himself working in space as a blocker

–Played in 33 career games at Missouri, starting 25 over three years
-Hauled in career-high 11 touchdowns in 2017, which was his first year as a starter after redshirting in 2016
-Finished three-year career with 98 career catches for 1,187 yards and 23 touchdowns
-Senior year he put up 26 catches for 306 yards and six touchdowns
-Two-time All-SEC Second Team selection in 2017 and 2019
-Suffered season-ending knee injury in 2018 at Florida

Leading up to the 2019 season, a lot of hype surrounded Missouri tight end Albert Okwuegbunam (OH-koo-WAY-boo-NAM), with some calling him TE1 in the 2020 NFL Draft Class.

The tape certainly feels much, much different from that hype.

I came away pretty underwhelmed with Okwuegbunam’s tape, mainly from a blocking and athletic standpoint.

Lined up as a pseudo-H-back often in Missouri’s shotgun spread system, Okwuegbunam thrived on slipping out of the backfield up the seam for catch-and-run opportunities.

Against Idaho in 2017 (sorry to fellow writer Alex Kozora for bringing up Vandal pain here), Okwuegbunam slipped up the field with ease, beating the safety vertically for the strike and score.

Flash forward a year later and you see a similar play against Memphis, this time with some YAC from the big, lumbering tight end.

Okwuegbunam shows some burst here off the line and can’t be caught in open space. Keep in mind though: these types of routes are routine; there’s nothing challenging about them.

His calling card as a receiver is his tracking ability though.

You see other athletes get twisted and turned in situations like this, but not Okwuegbunam. Look at that ability to track over his shoulder, stay inbounds and finish off the score.

The tape as a blocker though? It’s as rough as I’ve seen from any TE in this draft class.

A man of his size should not be stunned and pushed backwards on the line of scrimmage. It happens way too often with Okwuegbunam though. He just doesn’t have the play strength in-line to hold down that role in the pros.

There’s no leg drive and really no thump to his initial punch. He’s improved from 2017 to 2019, but not nearly enough to be asked to block as much as he was at Missouri.

Pulling and striking is a huge problem too for Okwuegbunam. He doesn’t have good awareness of defenders when on the move, and really struggles to climb and contact in space.

Here against Ole Miss in 2019, Okwuegbunam gets caught up trying to block the same person the pulling lineman in front of him takes, and then he completely ignores the most dangerous man (ILB) to try and strike the outside defender, resulting in a big loss for Missouri.

Final thoughts on Okwuegbunam: right now he profiles more as a No. 2 TE on a depth chart that is mainly a pass-catching threat, rather than an every down TE asked to wear all sorts of hats. He’s too unrefined and raw as a blocker to ask him to do that consistently in the pros.

I’d love to see a team grab him and let him work as the Y move-TE and let him play above the rim, especially in the red zone. He could be a real weapon there. Just don’t overdraft him in a weak TE class.