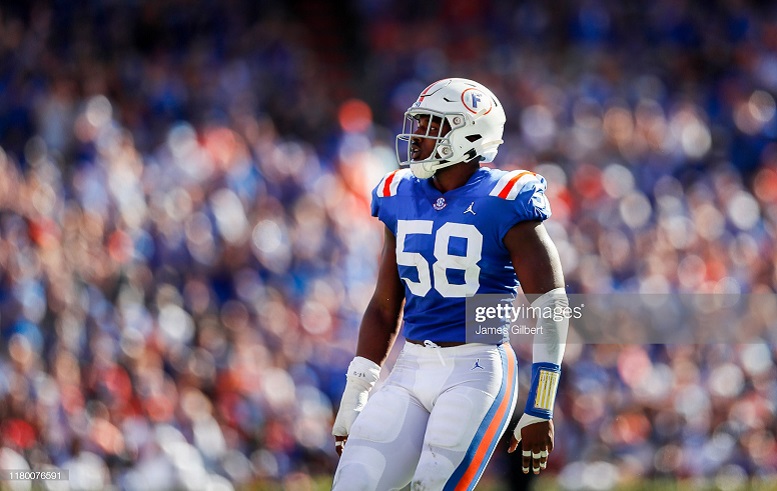 The NFL is transitioning – rather quickly – to speed, speed, speed at almost every position, and edge rusher is no exclusion.

Thankfully for Florida pass rusher Jonathan Greenard, the game is transitioning towards a style that suits his strengths quite well.

A graduate transfer to Florida for the 2019 season from Louisville, Greenard burst onto the scene in the SEC, quickly becoming one of the top pass rushers in the tough conference.

In just one year at Florida, Greenard doubled his career sack numbers, putting up 10.0 sacks for the Gators in defensive coordinator Todd Grantham’s system, helping the Gators go 11-2 and reach a New Year’s Six bowl.

Quite a bit of that had to do with the presence of Greenard and the overall impact he made.

His calling card will be speed and finesse off the edge right away. His get-off and first two strides allow him to win often on the edge with his speed. One thing I really like that he throws into his speed rushes is the shoulder shake and dip, getting under the offensive tackle’s strike/punch cleanly.

He’ll finish strong at the QB.

When I say short area burst and explosion, this is what I’m talking about.

This isn’t an ideal way to rush the passer off the edge, but man alive is that some serious juice. In basketball, that’s rocking the baby to sleep. I can’t say I’ve seen this more than a handful of times from a pass rusher, but Greenard makes it look like it’s natural to him.

He’s definitely a little unorthodox as a pass rusher overall. Rarely will you see an outside spin move, but Greenard has it and turned it into a real weapon as a counter.

With his get-off and threat to shoot inside and blow by tackles, I saw tackles start to set up further inside against Greenard, forcing him to rush outside where they could try and push him up the arc.

Late in the season, he figured out how to spin outside and jumping inside, catching tackles completely off-guard. While he doesn’t get home here, a pressure is a major win, forcing the quarterback out of the pocket.

As a run defender, he has the want-to and flashes the ability, but it’s super inconsistent.

When he’s right, he’s a tough block in the run game.

Going against a tight end here, Greenard shows off the leg drive and ability to shock and shed, making the tackle for loss against the rival Miami Hurricanes.

Finishing is a problem though, especially in space.

I love the burst to jump inside here and then the club to keep himself clean against the tackle, but once he meets the running back he struggles to finish (get him on the ground). While pushing him out of bounds definitely works as a loss is a loss, I want to see him finish better in these situations.

Final thoughts on Greenard: he’s going to be a high-impact pass rusher quickly with his speed and counters, but I do worry about his run defense right away. He’ll need to add some bulk to his frame and learn to play the run more consistently with his hand in the dirt.

I hope whichever franchise calls his name on draft day doesn’t ask him to drop into space. He’s very uncomfortable doing it and would rather hunt the quarterback. Just point him in the direction of the quarterback, sit back and watch him hunt.