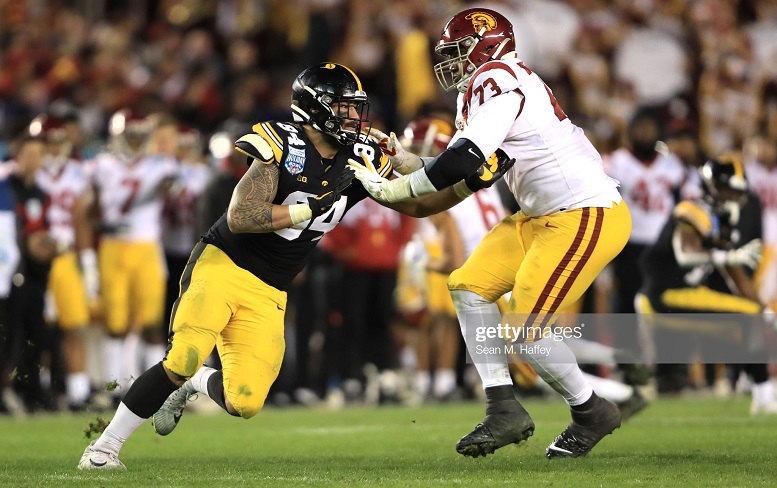 In a tackle class that features a lot of high-end talent with considerable depth to it, there is a sense of heightened expectations for every prospect that you watch at that position to live up that sort of upped billing in this class. There have been times and times over again where guys prove to be very good tackles. It is a class that keeps on giving the gift of very good prospects that can be had on Day 2, even if they have some ironing out to do.

So, when you go to watch much-hyped up underclassmen from a Power 5 conference, and from USC, nonetheless, you are going to expect big things from that prospect. So, when that prospect some exciting flashes but also shows massive flaws that prove he is pretty raw, what do you do? Well, this is the exact situation that USC OT Austin Jackson has presented me with. The guy is only 20 years old and has a lot of time to grow, but when there is so much talent in this class, that does fall a bit below the median line of expectation. Still, however, that should take nothing away from the talent that Jackson is and could become in the future. His tape is a fun ride up and down the spectrum.

Here is the first rep I want to highlight because it does highlight some of Jackson’s issues. He gets antsy here against a guy who is known for taking an outside track and instead of taking his set with patience, he rushes it, lunges forward, and relies solely on his punch to stun this rusher. That gets him off his center of balance and once the unch was misplaced outside of the shoulder pads, this was over. Jackson leaves his entire chest open by leaning and all the defender has to do is give him stab-club-rip and it is over for Jackson. He has to let his hands do the work and not just lunge and go for one singular punch.

Here is another just an ugly example of Jackson’s problems. He does not lunge forward as much here, but he plays incredibly upright and this shows off his lack of grip strength. His hands do get inside here but the linebacker to swat those down and reset the point of attack only to stack and shed the block as a whole. Jackson at other times will just try and punch guys in the second level, but this is an example of where he has to improve that grip strength and pad level because it leaves him incredibly vulnerable.

This right here is why Jackson trusts his punch so much. This is a powerful punch that stuns the pass rusher and takes him completely off his pass rush track to the quarterback. That is a perfectly placed punch to the sternum and it is what you want to see when the pass rusher tries to soften the corner with any move like a stab-rip which the pass rusher tries to do here. Jackson does a good job of letting his good footwork glide him here and it makes this a nice rep. This is what he needs to be doing, not lunging forward.

With the guard clearly not ready for this, Jackson makes a high IQ play here and really stops this blitz from getting home to the inside or outside. The powerful punch to push the second level blitzer into the interior offensive line and then the ability to still come around, wrap your head around, and pin the outside shoulder of the edge rusher almost as if he is reach blocking is impressive stuff. And these are the type of plays that draw you in on Jackson.

I like this rep a lot. Because even though Jackson plays really high here, he does a great job of recovering after surrendering the leverage battle. He does a nice job to reset his hands on the outside shoulder of this edge rusher and push him off his track. He does not allow this guy to corner around him and soften the track to the quarterback at all. That is why he sends this guy right around the pass rush arc. Heck of a job by Jackson to recover from a play that was initially negative.

Games Watched: vs Fresno State, vs Stanford, at Notre Dame, vs Arizona, vs Oregon