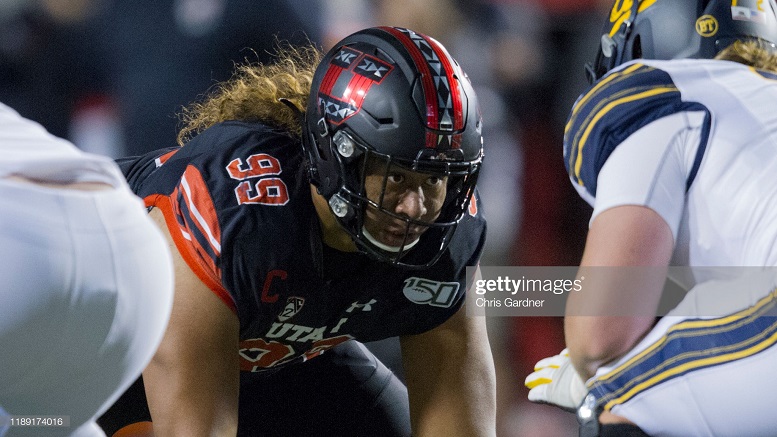 If you’re looking for size to add to the defensive line, Leki Fotu might be your guy with comparable size to players like, Akiem Hicks, Jordan Philips and Vita Vea. He played in Utah’s four man front lining up from the 0 technique out to the 3 technique and played quite a bit in a 4 point stance.

Against the pass, has good quickness and first step and can penetrate playing in a 1 gap system to disrupt the backfield. When he uses good leverage and hand placement he has the play strength to power rush offensive lineman and bull them back into the lap of the quarterback. He had some success using bull, long arm and push/pull to overpower blockers and also uses a club/swim and chops to create gaps to pressure the quarterback. Learning to be more consistent could improve his pass rush effectiveness with leverage, hands and mixing up his pass rush moves. When he stands up instead of driving forward he loses his power and becomes a non-factor.  His ability to counter with his hands is marginal at best and needs to improve to put more pressure on blockers.

At USC, he’ll use a club/swim to get the pressure and hit on the quarterback. He didn’t use this move often in the games watched.

Vs Colorado, a three play series where he uses quickness to beat the Zone block to tackle the runner and then again on a fake toss to get pressure and follows it up with power to bull the right guard back into the  pocket.

Vs Texas he displays his power using a long arm to drive the RG back to the QB for the sack.

Against the run, as with the pass he has the quickness to penetrate into the backfield beating the down/reach blocks of OL and disrupting the running lanes. He has solid hand usage and strength to control the lineman in one on one situations. He has solid lateral agility to flow with the play and has good pursuit willing to chase the ball all over the field. He can hold his own against double teams and works to get through them. He’s an aggressive tackler and runners go down when he gets his hands on them. He has solid mental processing and will lose site of the ball by flowing with the fake.  He must learn to disengage from blocker more quickly. The strength is there so the execution must improve. His change of direction is marginal and it takes some time to change direction.

Vs BYU, he fires out low and gets good push on the RG and flows to fill the gap and force the RB to look for another alley.

Vs Texas he’s going to fight through a double team and make tackle at the LOS.

The quickness and strength Fotu provides are assets to any defense on the inside (0-3 tech) and has the size and built to be used as 5 tech defensive end as well. Based on his skill set his would best fit in a one gap scheme where he could use that quickness to penetrate gaps and disrupt plays.  He clearly has the strength and length to play in a two gap system and with improvement in his timing and technique to disengage from blocks. If he can improve his counter and use of hands in one on one situation he could improve as an interior pass rusher however until he does he may only be a two down defender.