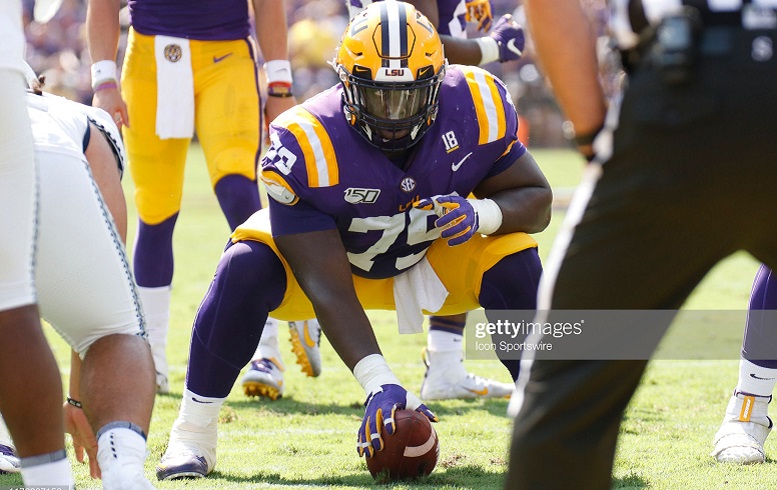 A high character player, leader and the man in the middle of the National Champion LSU offensive line. He started every game the last two years, has some experience at guard as well and will participate in the Senior Bowl. He has good athletic ability, good length, solid mental processing and good play strength.

In Pass Pro, when he has someone lined up over him he has a good base and quick hands to get them up and into the quest of the defender.  He has good play strength to handle power rushes and displays good footwork to mirror in one on one situations. When no one is lined up over him, he’ll look to help the guards. He shows good blitz awareness and has the mental processing to pick up on the outside when he is uncovered. He leans forward when blocking, more so in pass pro which has him off balance and susceptible to slipping off of defenders with quick lateral agility or those you have the strength to yank him forward. He has an adequate punch and isn’t effective stunning defenders when using it. He was adequate handling stunts and twists especially cross dog blitzes. His clock in Pass Pro runs for about 3 seconds and then he lets up and there were too many plays were there was minimal effort when uncovered.

At Alabama, I’m not sure if this rep is by design or it’s this awareness but he shows his athleticism as he loops to the outside to pick up the blitzer.

At Alabama, here is an example of his forward lean. He’ll work to his right to help the guard and he whiffs on the block with the defender swimming over him.

Vs Oklahoma, here is strong rep by him one on one vs Neville Gallimore. Good countering with his hands, footwork to stay square and very good sustain.

As a run blocker, he has good quickness and mobility to move laterally on outside Zone runs and uses his hands well to move defenders out of the way.  He has very good timing on combo blocks and is effective as the post or the climber and has solid ability to handle defenders on the second level. He can be used as a pull blocker on outside runs or to get out in front on screen passes. Has good play strength to get on the hip of players in the A gap and drive them out of the play and works well with teammates on double team blocks. His forward lean is seen in run blocking as well and allows defenders to slip around him. When pulling he wasn’t aggressive when attacking the defender.

Vs Central Florida, on this outside Zone run he couldn’t get across the face of the shaded DT but has the strength to drive him out of the play.

Vs Florida, here is a combo block where he blocks down to his left before climbing to the second level.

At Alabama, he starts to double to his left and recognizes the linebacker attack the A gap and cuts him off to keep the backfield clean for his RB.

Cushenberry is an easy mover and rarely looks like he is stressed. Sometimes so much that he looks casual lacking aggressiveness when taking on blockers. There’s a passiveness to his style the left me wanting to see more competitiveness but I guess that’s just his style.  I think he could fit in a Power or Zone system but Zone would be the best fit.  He’ll need to work on his balance and keeping his feet under him, his handling of A gap blitzes and playing through the whistle. Some are very high on him and he may go day two but I’m not with them.