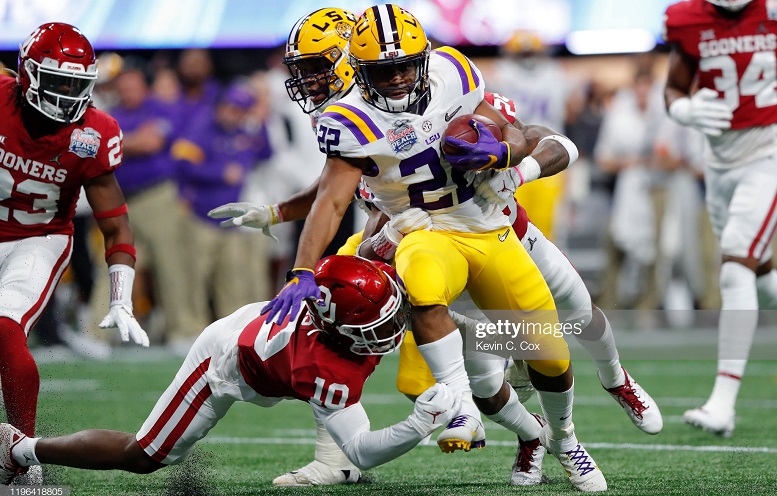 This running back class is a bit weaker than we all expected with guys like Najee Harris and Travis Etienne heading back to school for their senior years, but they gained a big boon as well the day after the National Championship with the declaration of standout LSU RB Clyde Edwards-Helaire.

For a guy who just a year earlier was nothing more than a rotational back in the LSU offense, Edwards-Helaire took the opportunity for more touches and ran with it as he was one of the integral parts of the best offense in the nation on the championship-winning Tigers. And once you dive into his film, it is not hard to see why Edwards-Helaire did so well, there are so few flaws to his game and it made him an absolute matchup nightmare to face for teams.

This play illustrates a few things that Edwards-Helaire does so well from the second-level. He sees the linebacker scraping over, stutter steps, and runs it behind the center instead of cutting it up behind the guard like this play was intended. That shows active eyes and processing for what the linebackers are doing at the second level. Then, we see him manipulate this defensive back’s angle by sharpening his angle towards the sideline and then just shrugging him off once he did. Edwards-Helaire can toy with angles so well because of his ability to break tackles in the open field. The obvious downside despite showing off good vision and contact balance here is the long speed. If he has more juice in the tank, he probably takes this thing the whole way, but that is not what Edwards-Helaire’s forte really is honestly. You wish he had more speed, but it is not going to break his game for you.

This is the first glimpse that really shows the type of footwork and lateral quickness that Edwards-Helaire possesses as his best trait. To see the linebacker nearly shedding his block and then to make that quick of a sharp cut to the outside is insane. He makes it look effortless, it looks like he is gliding on the field. That shows just how elite both his footwork and lateral agility are and with his vision, that is a very, very dangerous combination.

Absurd reaction and quickness on this jump cut. The defensive lineman gets free underneath and lunges at Edwards-Helaire, but it just takes one fluid jump cut to get the inside and then his burst and physicality can take him into the end zone from there. I love the fact that he was looking to lower his shoulder to get into the end zone as a smaller, 5’8” running back. He has no fear of running through guys.

I mean, it is honestly kind of comical to watch him toy with defenders at such ease and make these cuts seem so effortlessly executed. He jumping on his feet a good four or five times, but also it takes is the quick twitch and cut inside to allow him to then get the defender leaning as he runs through an ankle tackle. This is NFL starter level stuff.

Receiving ability is something he has, even if it is wide open in the flat like he is here on this play. He has rather sure hands and quite the knack for running routes as a running backs, so much so that Joe Brady and the LSU offensive staff had no problem moving him all around the formation into the slot or outside as a receiver. He then executes a wicked jump cut and breaks yet another tackle, which after seeing him do it so many times over the course of the season, seems to just be a consistent, top-notch trait.

Here is that route running acumen on this angle route out of the backfield. That is a fluid and very sharp cut to get open over the middle of the field here as he leaves everyone in the dust from that cut. The juke in the open field literally turns the defender around and onto his back, it is just dirty stuff but he makes it look so easy. Edwards-Helaire has the goods to be a starter in this league.

Games Watched: vs Georgia Southern, at Vanderbilt, vs Clemson, vs Alabama, at Texas