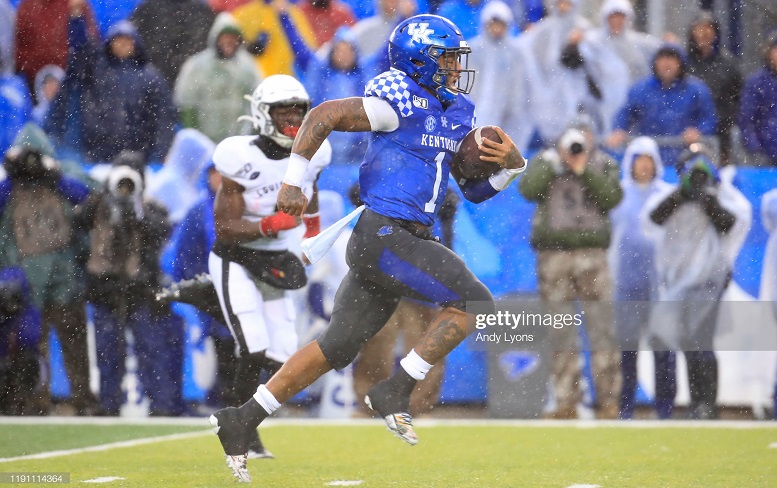 -Dynamic playmaker with the football in his hands

-Compact, well-built frame that allows him to play with power and impressive contact balance

-Possesses good body control as a receiver, allowing him to adjust easily mid-route

-Route tree almost non-existent; lots of quick screens to get him the ball in space

-Position and fit at the next level is a major concern; what is he?

-Searches for splash play constantly; needs to learn to take what he can get

-No real defining trait for the next level

-Led Kentucky in receiving in 2018 with 67 catches, 745 yards and 5 touchdowns (most catches in a season at Kentucky since Randall Cobb in 2010)

-Played QB for Kentucky midway through junior year, rushing for 1,468 yards and 13 touchdowns, adding 30 receptions for 348 yards and a touchdown prior to position switch

One of the best athletes in the country coming out of high school in 2016 certainly lived up to the hype in three years at Kentucky.

Coming out of rough and tumble Youngstown, Ohio, Lynn Bowden Jr. used football as his escape from a tough neighborhood and has him on the cusp of potential greatness in the NFL.

While at Kentucky, coaches and teammates raved about Bowden Jr.’s leadership and work ethic as they watched the former 4-star recruit flourish, turning into a dynamic wide receiver in 2018, before then putting the team first in 2019, filling in at quarterback for more than half the season, rushing for 1,468 yards on the year, becoming one of the most dynamic weapons college football has seen in recent years.

All of that sounds great, but it raises questions about Bowden Jr.’s fit at the next level. What exactly is he? He lost nearly a full year of development at WR to help Kentucky do whatever it takes to win games.

Bowden Jr.’s tape is incredible though. He’s lightning quick, has great vision and contact balance, and just has a knack for the splash play. Get him the ball in space and prosper offensively.

In today’s NFL we’re starting to see more jet sweeps and jet passes across the league. That play is designed to get speed weapons on the perimeter quickly, stressing defenses horizontally.

At Kentucky, Bowden Jr. flashed that ability repeatedly in the SEC.

He gets up to top speed in a hurry and knifes through lanes for splash plays. Texas A&M had better athletes and more skill on defense than Kentucky had offensively. Bowden Jr. made them look silly.

The Wildcats threw a lot of quick screens to the outside to Bowden Jr. in 2018 when he was a receiver. That was simply designed to get him the football quickly and let him try and win in space one on one.

Bowden Jr. has really good vision and is pretty darn elusive despite. He doesn’t look like he’d be a burner, but he jumps on defenders quickly, catching them off guard. He eviscerated this angle by the Florida defensive back in 2018.

In 2019, at quarterback, Bowden Jr. really showed off his playmaking chops with the football in his hands.

Against Virginia Tech in the Belk Bowl, Bowden Jr. relied heavily on his legs, racking up a ton of yardage in Bud Foster’s final game as DC at VT.

He’s shot out of a cannon here. There’s burst and explosion very clearly, and he just destroys any type of angle defenders may have.

Later in the game, Bowden Jr. showed off his contact balance and power.

He’s really good in tight situations and has the body control to shift his weight around and dish out punishment, rather than receive it. He’ll let you know about it too.

While Bowden Jr. is underdeveloped as a receiver, he flashed some traits on tape at WR that were impressive. He has really good body control on routes, allowing him to adjust quickly while the football is in the air, and he has a great sense in tracking the football down the field.

Against Missouri in 2018, Bowden Jr. did something most receivers don’t do, even in the pros.

Watch him put his head down once the ball is in the air and run to a spot to find the football. That’s the baseball background coming out in him. It’s rare to see that at WR on tape, but Bowden Jr. flashed it.

Most guys keep their eyes on the football and track it, leading to slowing down in their routes; not Bowden Jr. Just like outfielders are taught in baseball: track the flight, pick a spot and sprint to it.

Final thoughts on Bowden Jr.: He’s going to need a franchise that has a clear plan with him from the onset. I worry a team is going to see the splash plays and the versatility and just see him as a gadget guy. He’s too talented to just be that. I think he can excel as an X receiver, but he’ll need patience and a development plan put in place to get the most out of him.

You can’t teach what he does with the football in his hands, but you can’t pigeonhole him into a 15-20 snaps a game guy and hope for one or two splash plays. Get the most out of him. He could be a steal early on Day 3 in the right structure.