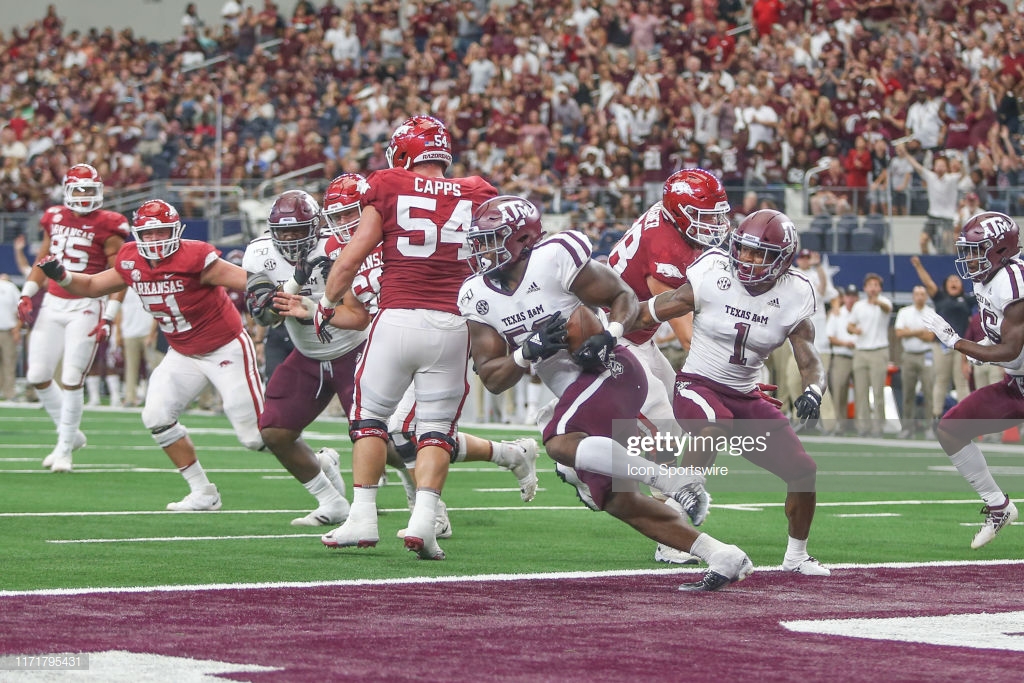 A nice mix of quickness and strength in this defensive lineman entering the draft after his junior year who has played in one and two gap schemes in college.  He played primarily at the 3 tech in Texas A&M’s four man under front but was used from the 0 tech over the center out to the edge on passing downs.

Against the pass, he has shown the ability to create pressure from different places along the defensive line. He can use quickness at the snap to shoot gaps to stress the interior offensive lineman or use strength to drive a defender back.  He has very strong hands and uses very good leverage to bull rush offensive lineman into the pocket. On the edge he’ll try a spin move to the inside but is most successful using power. His success come from bull rushes, long arm and yanking the blocker out of the way. Once past the OL he has good acceleration to get to the QB quickly. Good awareness to get his hands up when he won’t get to the QB.

He has adequate lateral quickness displayed on twists giving the OL time to react and his get off at the snap fluctuates.  After violent disengages from blockers he was often off balance and a bit out of control. When he is slow at the snap and tries to penetrate with quickness he gets sideways and driven out of the play. Despite active hands he must improve his technique to counter the hands of blockers. He shows slow recognition on screen plays.

Vs N.C. State, he’s rushing from the 3T on the right side and uses good hand placement to lift the left arm and strength to push aside the LG leading to a sack.

Vs Arkansas, lined up over the right guard this time he uses good hand placement and strength to yank down the guard and throw down the QB.

At LSU, lined up over the center he bulls the center back into the lap of the QB.

Against the run, when they played one gap and he shows the quickness to penetrate into gap and disrupt the backfield. When playing a two gap scheme he uses his leverage and good hand placement to control the blocker and has very good punch, hand strength and play strength to yank down or throw blockers aside. He is a strong tackler taking down anyone he can get his hands on and in short yardage situations he gets lower than the OL clogging the A gap area. He displayed the strength and technique to split double team blocks and fight through combo blocks. His motor is very good within the tackles.

When penetrating in one gap defense he’ll get too much depth and lose sight of the ball and limited his tackles verses the run. He has a limited radius in which he makes plays. Once a ball gets a couple yards away his motor idles to a light jog toward the play leading to very few plays outside the tackles.

At Clemson, he resets the LOS by driving the LG into the backfield; gets square and make the TFL.

Vs Arkansas this time against the LT. He uses his left arm and leverage to lift and shed the blocker and make the tackle.

At Georgia, he uses leverage, hand placement and his impressive strength to toss aside the LG and make the tackle.

Madubuike is one of the stronger players I’ve watched the last few years.  His hand placement, leverage and strength give him the opportunities to easily toss aside offensive lineman.  He has experience along the line but will project to and interior lineman who can play from the 0 tech to 3 tech in either a 1 gap or 2 gap scheme who can stay on the field and rush from the inside on passing downs.  Interior pressure is something teams covet and I think that makes him a day two pick.