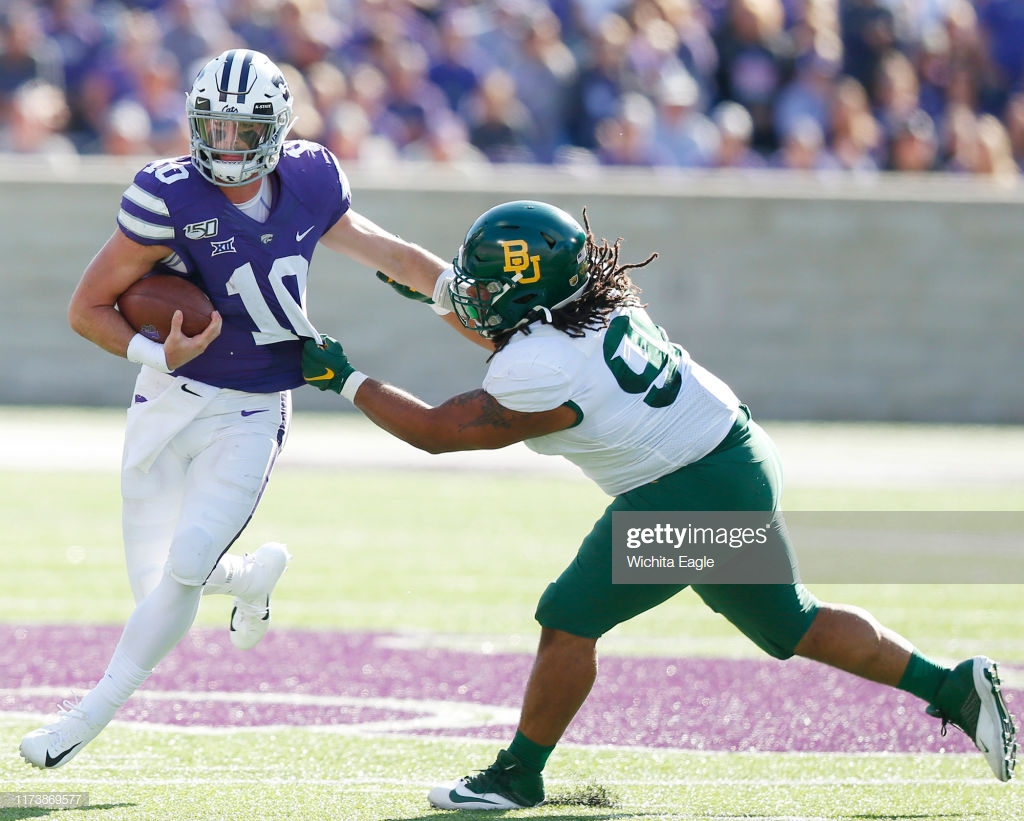 -Thick, powerful frame
-Able to eat up blockers in the run game to let LBs flow freely
-Gets skinny and slips through gaps as a pass rusher when turned loose
-Surprisingly quick getoff when asked to rush the passer; catches interior OL off guard
-Fast, efficient hands to stay clean in close quarters
-Freakish movement skills for his size

-Doesn’t offer much consistency overall as an inside rusher
-Needs to shoot gaps and use his quickness to win against top competition; doesn’t have a pass rush arsenal to win one-on-one
-Anchor against run game can be maddeningly inconsistent; pad level betrays him at times
-Seems to take plays off and prefers stalemates in run game
-Has short arms and doesn’t lock out well playing the run

-Played in 48 career games at Baylor, starting 30 games for the Bears
-Finished four-year career with 133 career tackles, 19.0 tackles for loss, 5.5 sacks, and one forced fumble
-Named strongest player in Baylor program by head coach Matt Rhule leading into spring of junior year
-Named a top 300 recruit by ESPN and Scout coming out of high school
-Reportedly clocked a 4.9 40-yard dash at Baylor spring workout in 2019

Baylor senior defensive tackle Bravvion Roy certainly looks the part of an old-school, run-stuffing nose tackle in a 3-4 scheme, but the tape leaves the viewer wanting more from the veteran defensive tackle.

With his size and noted strength in the weight room, one would think Roy would dominate at the point of attack consistently. From the tape I watched, I really didn’t see that. It seems like he was good with just standing there tying up an interior lineman.

I’m not exactly sure what Baylor’s defensive philosophy is, but from watching the tape that’s not really what they wanted Roy doing.

When he was asked to work up the field, he struggled with his pad level, and that led to him getting pushed out of holes, especially against Oklahoma in the Big 12 Championship game.

I love the quick swim over future first-round center Creed Humphrey, but that swim also forces Roy to raise his pad level, which plays right into the hands of the Oklahoma right guard, who catches Roy quickly and rides him out of the hole, leading to a touchdown.

I’d like to see Roy win quickly and then anchor in the hole, rather than continue to try and push upfield and work his way out of the hole.

One thing I noticed with Roy is that when he’s asked to read and react, he’s pretty good at it.

Feeling the reach block by Humphrey helps Roy out a ton too as he starts to flow to his left, all while keeping himself locked out on Humphrey. From there he’s able to clear himself and make the stick in the hole for the short gain.

While he is a big body that can theoretically eat up space in the middle of a defense, when Baylor’s defensive coordinator let him loose inside, he showed some freakish movement skills.

His first step here is really good. He gets moving to his right, causing Humphrey to take a step to his left. Once he sees this, he has the short-area agility to jump back to his left to get into the A-gap and then bull rush through the two linemen for the sack.

Later in the same game he won against Humphrey again.

Look at that first step again. When he’s going forward, he’s able to win a lot with that first step. It’s simply too fast and explosive for interior linemen right now.

Add in the swim and the ability to get skinny to take the strike zone away from the guard trying to recover and you get a pretty darn good TFL against the run.

Final thoughts on Roy: I think he can be serviceable right away in the right defense. For me, he seems more like a Sheldon Day type in a 4-3 front, rather than a true nose in a 3-4. He has some pass rush juice when asked to shoot gaps and split linemen in half, but he’ll struggle to win one-on-one head-up.

Turn him loose against the run and pass, take the time to develop him and teach him some discipline when reading his keys and he could have a nice little career as a rotational defensive lineman.