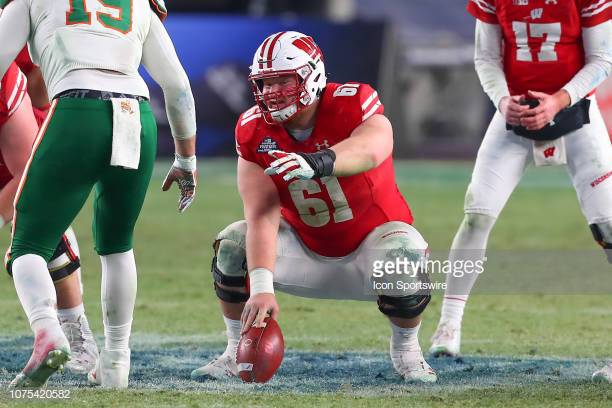 If a team is looking to draft an offensive lineman, Wisconsin is a good place to start. They have a long history of big uglies coming out of there and Tyler Biadasz (bee-AH-dish) is next.  He started every game at center in college and was the leader and communicator on the offensive line. Coming into this season he had 28 starts. The other 4 lineman had less than half of that combined. Depending on where you look he might be listed in the top 25 players or outside of the top 100.

As a pass blocker, he shows good quickness with his hands after the snap to get them into position and sets up quickly with a strong base. He has a quick punch, good hand placement and play strength to lock on to defenders. He has good mental processing knowing where he has help and who needs help. When he is uncovered he keeps his head on a swivel, helps his teammates and shows very good mental processing on twists smoothly passing off rushers and picking up others. He was used to get out in space on screens but frankly they weren’t very successful in execution of the pass so I don’t have a good read on him there. Very good competitiveness in all aspects but showed up after turnovers putting himself in good position to make the tackle. Always looking to help his team in any way.

At South Florida, here is a good rep against the 0 tech with good hand placement and footwork to mirror to the outside and a strong reset of his feet to shut it down.

Vs Purdue, here he shows his mental processing and execution blocking the twist. He’ll block to his left on the DT and then smoothly picks up the Edge coming from his left.

His anchor could use some improvement against power rushes. Defenders with good leverage can get into his chest and drive him back. He’ll get impatient with his punch forcing him to reach and getting him out over his toes and bending at the waist.

Vs Ohio State, here is a rep showing his anchor. He’s showing good hand fighting but his pads are a little high and the DT’s leverage forces a push back to the QB.

As a run blocker, he operated mainly in a Power/Gap running scheme with occasional Zone Runs. On base and down blocks he shows good leg drive and play strength to lock on and turn defenders and gets hip to hip with guards on double teams to move defensive lineman. He has good mobility to both sides to execute short pulls over the guard or to get outside and sweep/toss plays and swallows up defenders on the outside. He has good timing and execution on combo blocks climbing to the next level and good positioning to execute on the second level. Very good effort to get downfield and throw and extra block.

At Michigan, he’s going to pull to his left showing quickness and mobility and will pick up, not one, but two defenders coming around the edge.

Vs Ohio State, very good execution throughout the play. He’ll chip the DT at the LOS. Climb to the second level to get push on the linebacker and then adds in a block on the safety downfield.

Vs Purdue, he has good control of the defenders, stays square and shows very good sustain blocking him 6 yards downfield.

When he aims too low, at the hip on down blocks, he slips off and ends up on the ground. Too much forward lean gets him in trouble and will lead to defenders swimming over him. Outside Zone isn’t his strong suit lacking the lateral quickness to get the reach block consistently on his own.

At Michigan, here is an example of him missing the hip of the DT. He’s low and over his toes and misses the block ending up on the ground.

I’m not sure why there is such a big discrepancy on where he is ranked heading toward the draft. He projects to be a starter early and looks like a leader on the field.  His best fit would be playing center in a power running offense but he looks like he could play the guard spots as well. His negatives are with balance and forward lean as well as cleaning up his anchor but those are areas he can improve. He should be chosen fairly early.