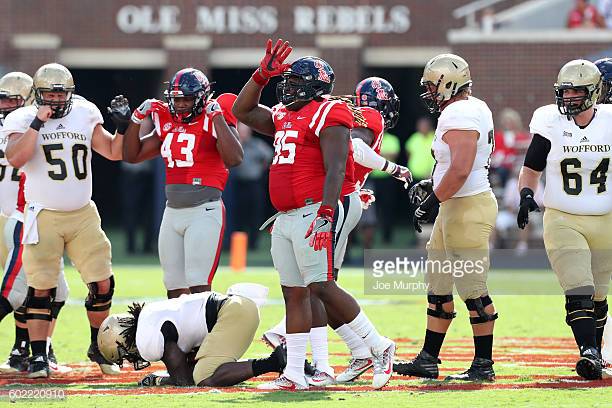 – Big frame and large lower half, looks like an NFL nose tackle
– Strong upper body and plays with built-in leverage, rarely gets too tall and able to get under taller blockers
– Surprisingly quick first step and moves well for his frame, can win off the line and penetrate
– Flashes ability to make impact plays, has impressive highs when at his best
– Power on bull rush and ability to walk blockers into the pocket
– Good hand use and has counter move (swim) to win when opponents sit on power rushes
– With proper technique, shows ability to anchor and take on double-teams in run game
– Shows effort and runs to the ball though predictably slow in open field
– Tons of starting experience
– Solid production given position and snap count

– Inconsistent player, game runs far too hot and cold
– On ground way too often, doesn’t show balance through contact and tends to drop eyes to lose vision on the ball and lose blocks
– Struggles to stay square to the LOS, causing him to get turned and controlled
– Has more issues with zone schemes, can’t always flow down the line, creating gaps and cutback lanes
– Not a dominant pass rusher who will disappear
– Tends to wear down as drives go on, won’t be an every down player

Jones hearkens back to the old-school nose tackle with a slight new-school blend. He was one of the largest men in Mobile and certainly fits the bill for what any team needing a zero/one tech is looking for. But Jones isn’t just a big guy. There’s a little burst, a bit of explosiveness with his game that can allow him to defeat blocks and create penetration.

And here, you see the power he creates on his bull. Combination of size, strength and leverage (that’s where 6’1 helps) to collapse the pocket or in this case, the backfield. Watch him control and move the center into the running back.

But the most frustrating part about his game is the inconsistency. You’ll see as many negative plays as you see positive ones. Jones must work on keeping his eyes up and staying on his feet. He’s on the ground far too often and doesn’t always play to the size and talent he clearly shows.

His pass rush impact will certainly be limited though to be clear, it isn’t non-existent. Just don’t expect him to be the next Javon Hargrave. If he can stay on his feet, he’ll become a more consistent and valuable player but for being a senior with lots of starting experience and still obvious technical woes, it’s hard to trust he’ll get those things fixed. Mix of Justin Ellis and a former Runnin’ Rebel, Jerrell Powe, both of which were drafted in the mid to late rounds.

Games Watched: at Memphis, vs Arkansas, at Alabama, vs LSU, Senior Bowl